Matthew Weiner, Jon Hamm and the "Mad Men" Cast Say Goodbye to Their Show and to the TCA – Ed Martin

Pasadena, CA – Between their annual Winter and Summer tours members of the Television Critics Association attend hundreds of panels every year. Throughout the course of a decade or more that translates into thousands of press conferences filled with personalities promoting projects.

That said it isn't very often that any one of those panels packs any kind of emotional wallop. The few that do are usually "farewell sessions," or panels at which the producers and stars of a long-running series promote its final season. In some cases they take the time to thank the critics, reporters and bloggers in the room for embracing their show early on and keeping it at the forefront of their coverage until viewers find it.

One such session took place Saturday at the Winter 2015 tour when "Mad Men" creator and executive producer Matthew Weiner and the six primary stars of the show – Jon Hamm, Christina Hendricks, January Jones, Elisabeth Moss, John Slattery and Vincent Kartheiser (a man of few words) – came by to talk (and actually say very little) about the final seven episodes of their series and to thank the TCA for its collective support, especially back at the beginning (2007) when few people were watching and AMC was not yet known as the home of some of the best hour dramas on television.

The panel began with a look-back video presentation featuring dozens of unforgettable moments from the series, and it ended with the premiere of a powerful promo for the last seven episodes. Throughout the session, and especially at its end, critics (including myself) were feeling increasingly wistful if not downright saddened by the realization that one of their favorites was coming to an end. I think one big reason I was moved by it all was the fact that I have lived with, thought about and talked about the show for seven years. It has been a part of my life for a significant portion of my life. That wouldn't be the case if I had binge-watched it in seven short weeks or months.

The last time I can recall experiencing this same widespread emotional connection at a TCA tour was in January 2006 when the cast of NBC's "The West Wing" came by to talk about that show's final half-season. That session opened with producer John Wells and cast members thanking the critics for supporting the show when it was very new and vulnerable.

AMC president Charlie Collier nailed it on Saturday when he introduced the "Mad Men" panel, which he described as "the definition of a bittersweet moment." He couldn't have been more accurate.

"For the people in this room and for so many around the world, 'Mad Men' is a show that needs no introduction, and you all know this history because, frankly, you helped shape it," he told the critics. "Backstage, Matt just said to me, 'The last time I was on a panel, we were your only show.' Obviously, 'Mad Men' went on to become one of the most iconic shows in television history and you, the television critics, were the very first to believe in [it]. You helped the world discover it. So please allow me to begin this panel by saying 'thank you' again."

The session will also forever be remembered by those who attended it as an unexpected showcase for the sharp wit of series lead Jon Hamm. (As I tweeted at the time, any broadcast or cable development executive worth his or her weight in salt should at this very minute be working on developing a single camera comedy for this guy.)

For example, when one critic oddly asked if Hamm was happy that the show was ending, he didn't miss a beat. "Yeah, I'm thrilled that it's ending," he exclaimed. "[I'm] so looking forward to being unemployed for as long as I'll be unemployed! I'm so happy not to see any of these people ever again! All of that is really great! Hashtag: sarcasm."

When the laughter died down Hamm heightened the sense of melancholy in the room. "Honestly, there's no version of this ending that is not super painful for me, and mostly it's because of these people [the other actors] and this person [Matthew Weiner] because they've been the single constant in my creative life for the last decade," he said. "I will never be able to have this again, and that's a drag."

Happy Hamm returned when another critic asked about the possibility of spin-offs. "Better Call Pete!" he declared, in reference to Kartheiser's character Pete Campbell and the "Breaking Bad" spin-off "Better Call Saul," a panel for which had run shortly before the "Mad Men" session.

Weiner was asked for his thoughts about how people watch the show and obsess over it. "I have no complaint," he said. "I don't care how it's being watched." He did bring up one of the most bizarre rumors that played out in the press during the show's history, about Don Draper's second wife Megan somehow being murdered by the Manson family. "The Sharon Tate thing is so flimsy and thin," he mused. "I don't know what to tell you. I would like to think that people would know that the show's striving for historical accuracy [and] that I would not add a person who was not murdered by the Manson family into that murder. So that in itself is the dumbest argument in the world for me. But I love that people have conspiracy theories, that they have all this other stuff."

It didn't take long for Hamm to once again entertain the room. When a critic prefaced his question about the "Mad Men" finale by bringing up the fact that many viewers were upset with the way CBS' "How I Met Your Mother" ended last year (with the revelation that the mother of the title was dead), Hamm cut him off.

"Finally, a 'How I Met Your Mother' question!" he exclaimed. "[We've been] waiting and waiting seven years! Finally!"

Hamm also said that his next job would be in car detailing. "I've started a little job," he revealed. "If anybody needs it, I will seriously wash your car." As the conversation continued we learned that Kartheiser is joining him in the car washing business.

"Because of the show [we are] sticklers to detail, which is actually the name of Vinnie and [my] car detailing company," Hamm laughed. "Stickler to Detail. I'm gainfully unemployed, if it's not obvious by that answer. I have nothing to do, literally."

Ending on a somewhat more serious note, Weiner admitted that he will never fully be able to let "Mad Men" go. "It is a very special, creatively satisfying experience, and the part that you can't leave alone is you're, like … am I going to expect this to happen again? 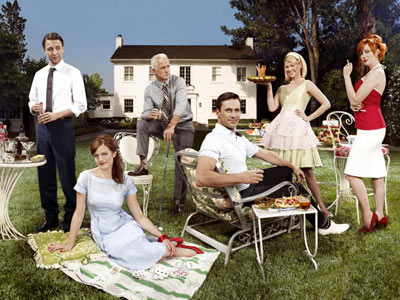 "Here are the original six cast members of the show," Weiner said, gesturing to the actors on stage. "What show gets to do that for seven years? They're all here! They all were integral in the story. You got to see them change over all this time. It's at this point close to a decade in the lives of these characters, which was sort of the intention from the beginning ... Good or bad, it's just been this incredible experience.

"I don't know about everybody else but I can't wait for people to see [the last seven episodes]," he continued. "It's going to be weird to actually get to the point where there are no more new ones. The spin-off right now is these last seven episodes as far as I'm concerned."