“Maude” Took on Sexual Assault and the Studio Audience Laughed! 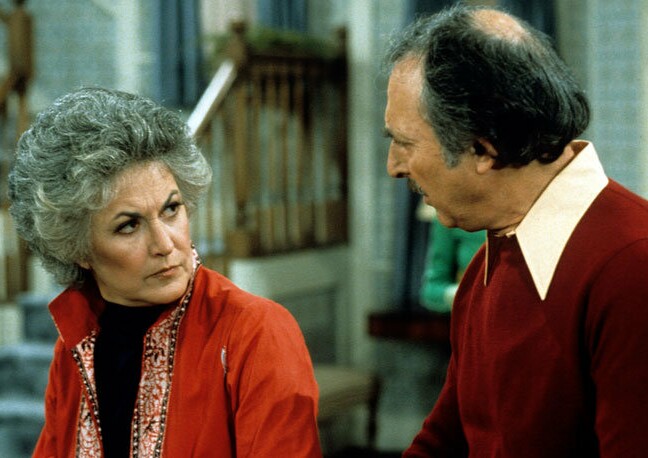 As commentaries about race relations, the economy, immigration, climate change, gun control and other current concerns begin filling 2018 retrospectives in online and print publications, issues surrounding sexual assault are sure to land near the top of the list, from the ongoing exposure of sex monsters in Hollywood to the Kavanaugh hearings and everything in between.  Sexual misconduct of all kinds is especially relevant in the entertainment business, given the depth and breadth of bad behavior that has continued unchecked in that arena for decades, and it is only now moving from fodder for jokes about casting couches to critical conversations sparked by investigative journalist Ronan Farrow and fueled by the #MeToo movement that have led to corrective actions.  Accordingly, expect more stories like those in which the self-absorbed Grace confronted her father about a sexual assault she suffered at age 17 by his friend Harry on Will & Grace and the tough-as-nails Murphy shamed an esteemed college professor who had menacingly attempted to force himself on her during her student days on Murphy Brown.

They are not certainly the first sitcoms to tackle this subject.  For example, Maude, one of Norman Lear's many groundbreaking comedies from the Seventies, took it on a long time ago.  In The Tax Audit, an episode that was first telecast on February 12, 1974, the always outspoken title character (played by Bea Arthur, above left) recognizes the IRS agent who has come to the Findlay home to conduct an audit of her husband Walter’s tax return as the man who had attempted to force himself on her one weekend in Boston when she was a teenager.  As outspoken as the “uncompromising” and “anything but tranquilizing” Maude was known to be (as noted in the show’s theme song), she had to take time to work up the nerve to tell Walter (Bill Macy, above right) what had happened and to then confront the man who had traumatized her so long ago.

Sadly, the episode of this then-timely show could have been written right now.  But it surely would not be presented in the same way – with the studio audience repeatedly bursting into laughter as Maude tells the story of the attack.  That's right:  As the character attempts to surface and process an assault from her distant past the audience laughs at her!  (They certainly weren't laughing with her.)

Of course, it may be possibile that the studio audience didn’t laugh, but that would mean executive producer Norman Lear and his team – and, perhaps, executives from CBS -- opted to sweeten the laugh track at key moments.  In fairness, there were many (dare I call them) clever jokes woven into the dialogue.  Regardless, Bea Arthur is so convincing in conveying Maude's rising fears amid the merriment that it is genuinely unsettling when viewed today.

At first Maude can’t figure out who the IRS agent is or why he makes her so nervous.  When she says to her daughter Carol that he might have something to do with an unpleasant experience, she replies, “Maybe it’s one of your ex-husbands.”  Then she simply leaves (as the audience roars) without wondering why her mother is so troubled.

The audience laughs again when Maude finally remembers who the IRS agent is and what he did to her.  “Walter, that self-righteous servant of our federal government tried to rape me!” she cries in the privacy of their kitchen.

“When?” Walter asks.  “The only time I turned my back was to hang up his coat!” (more laughs)

“Not now, Walter!  Thirty-one years ago!” Maude continues.  “That monster is responsible for the most terrifying night of my life!  I’m shivering.  It was ghastly.  I don’t think I can handle this.  Tell me what to do!”

“Let bygones be bygones,” Walter callously replies, as the audience bursts out laughing once again.

Maude explains that he attempted to force himself on her in a car.  She had tried to scream for help but the windows were up and the radio was blasting.  It was only when her shoe smashed through the windshield that he stopped and she was able to run away.  The nightmare didn’t end there; when she finally made it home at 2 a.m. her father was waiting.

“He took one look at my torn sweater and broken bra strap and he said terrible things,” she recalled.  “He called me terrible names.  Tramp.  Fast.  Common.  Those were the nice ones.”  (more laughter)

Walter remains puzzled.  At least she wasn’t raped, he implies.  Now Maude is livid.  “That makes it alright?” she asks.  “Because he didn’t finish what he started out to do?  That wipes the slate clean?”

The laughter was constant as the conversation continued.  “It’s part of the dating game,” Walter declares.  “It happens all the time.  A guy takes a girl out in the car and either he gets lucky or he gets his face slapped.”

He’s clearly more concerned about his taxes than his wife’s trauma, telling her that she is “making a mountain out of a molehill.”

“A woman’s feelings are her most precious possession!” Maude replies.  “They should be treated with dignity and respect!  But I wouldn’t expect you to understand that.  You’re a man!”

“What a lousy thing to say,” Walter responds.  (more laughs) 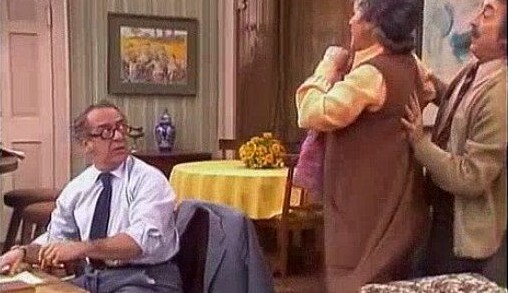 When Maude finally confronts the IRS agent (Larry Haines, above left) he remembers spending a weekend in Boston when he was in the Navy, but he does not remember her or the incident – until she mentions the smashed windshield.  Then we get the other side of the story, which proves to be surprisingly thought provoking.  The audience laughter continues throughout.

“Maybe I did try to take some liberties, but I was a kid going off to war,” the agent says.  “I wanted to spend my last few hours with a very charming, gorgeous and, if you will pardon me, sexy dish.  I must say you haven’t changed a bit.”

Maude is flattered.  (more laughs)  Then she regains her composure.  “That still did not give you license to try to compromise me and then fling me aside without guilt or remorse!” she asserts.  (more laughs)

“Mrs. Findlay,” the agent calmly replies, “I didn’t fling you aside.  I ran after you to apologize.”

Then comes a wonderful bit of dialogue.  “Mrs. Findlay, my remembrance of the occasion is slightly different from yours,” the agent says.  “But if that is the way you remember it then I’m sorry.  I ask your forgiveness.”

“I accept your apology,” Maude replies as he makes his exit.  Then she turns to her husband.  “Oh Walter,” she says.  “All those years of fear and humiliation, gone!”

Then comes a truly tacky bit of dislogue.  As a sullen Walter shows his wife the paperwork that the agent left behind, she says, “How do you like that?  What he tried to do to me 31 years ago he just did to you today.”  (more laughs)

This episode would likely never be written as it is in today’s climate, and it certainly wouldn’t be telecast with all that laughter in all the wrong places.  But it had great value then, as it pushed an issue that wasn’t talked about in polite society right into America’s living rooms and got people talking about a delicate subject (as did many episodes of all Lear comedies at the time).  And it has great value now, as an outstanding example of how far we have and have not come since 1974.  If nothing else, it remains a necessary conversation starter.