Merry Moonshine from Digger and His Fellow Distillers on Discovery's "Moonshiners" 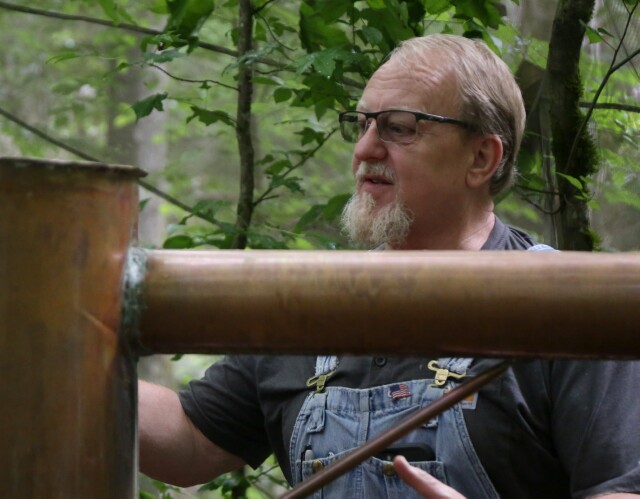 In 2020 of all years, doesn't Santa deserve something just a tad stronger than milk? Stuffing himself down all those chimneys, schlepping tons of toys, and his reward is … milk? Instead, let's offer the intrepid fellow something with a bit of a kick to ensure he stays jolly. What might that be? Eric "Digger" Manes, the star of Discovery's long-running Moonshiners, has the answer. "Santa Claus likes Dark Chocolate Appalachian Sippin' Cream that Sugarlands puts out, mixed with Mark & Digger's Rum," he declares, slipping in an ad for his distillery. "It makes a nice little moonslide."

The moonslide is the moonshine way of making a mudslide, a confection of a cocktail traditionally made with Irish cream liqueur, coffee liqueur, vodka and heavy cream. But with moonshiners, the booze, naturally, must change to shine.

Moonshiners, now in its tenth season, and its spinoff, Master Distiller, a competition show which kicks off its second season next Tuesday, have a seasonal cross-over special tonight (December 22). Digger, an east Tennessee native, and others from Moonshiners, including his partner Mark Ramsey and Tim Smith, are judges on the Christmas special. Shiner Steven Tickle is the host.

"Make us something that makes us want to ride a reindeer," Digger tells contestants Josh Owens, Mike Cockrell and Daniel Maner in the special. The three contestants will be familiar from Moonshiners as they try their hands at mixing potent potables that include candy cane and caramels mixed with alcohol.

Maner crafts a Mistletoe Martini, a bright red drink made with vodka, elderflower liqueur and mint.

"You look at that rascal right there and think, 'There's your holiday drink,'" Digger says as he holds a martini glass with the gem-toned liquid to the light to appraise it.

While some drinks may look like hangovers, just still in their liquid form, it's not as if traditional seasonal favorites such as coquito or eggnog are any less sweet or powerful. Moonshine Christmas cocktails, though, take the merrymaking to a new level. Digger's been making these for a bit and has some ideas.

"We normally do them, and have for several years," he says. "Of course, the old standby with the peppermint just seemed to be getting a little stale. A few years ago, we decided to experiment a little bit more. We made cranberry orange apple brandy. That's another one folks love as well. We call it Cosby Cognac; our neck of woods is Cosby, Tennessee."

Not surprisingly for a moonshiner, Digger is a man who likes his booze unadorned.

"They are all a little sweet for me," he admits of these holiday drinks. "Personally, I love straight, aged liquor. I am not a huge fan of a lot of these syrup liquors people are coming up with. They might get you where you need to be, but damned sure, they will make pretty puke. I drink my homemade bourbon. I age it. And, of course, as you get older, it seems it doesn't take as much to suit you as it once did. It's a couple of drinks instead of a couple of grips."

Digger, bespectacled and soft-spoken, and quick with the jokes, is doing what he had always wanted to do, which is make moonshine. Growing up, his father owned a funeral home and "did a little liquor here and there because it actually got more favors than a pocket full of money," he says.

When he was about 14, Digger saw his first still, and it was love at first sight -- and smell. His dad was picking up some shine to take to Nashville. A bill pending before the legislature concerned the elder Manes, so dad needed to ensure the wheels of lawmaking were well lubricated.

"It had a wonderful smell to it, and I was sold," Digger recalls. But the moonshiner was not about to take advantage of a kid, even if all teen Digger wanted to do was learn the ropes. "The old-timers around here were good, moral men and he wouldn't let me help until I was 18, and my father said it was okay," he says. "And here I am all these years later."

He would like to see all distilleries, especially those handmade, old-fashioned set-ups nestled in the Appalachian woods, made legal. Tax them, Digger suggests. He is genuinely puzzled as to why marijuana is getting legalized before shine.

"Liquor sales went through the roof in this here pandemic," he notes. "It is unreal how much liquor is sold. It doesn't matter where it went as long as it's put to good use." He says he doesn't know if buyers are "using it for hand sanitizer" or consuming it.

About Moonshiners, he advises, "Keep watching the show. You never know what kind of stupidity will show up."