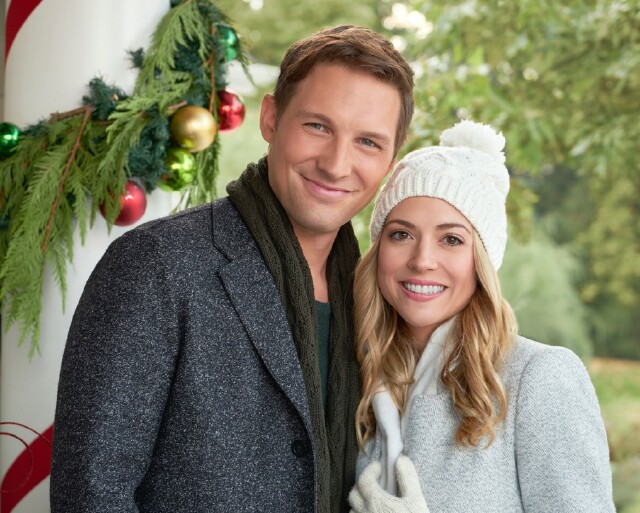 Hallmark Channel is adding another leading man to its ever-expanding roster: The O.C. alum Michael Cassidy, starring opposite Brooke Nevin in Jingle Around the Clock.  In addition to it being his first Hallmark project, Jingle is also his first Christmas movie, something even Cassidy (pictured at top with Nevin) was surprised about, as he recently shared with MediaVillage.  “I feel I’ve done so many Christmas episodes of television that my wires got crossed,” he laughed.  "But this is my first Christmas movie and my first for Hallmark!  It feels good to be here.  I had a great time making this movie, so if that's what it means to be in the Hallmark family -- I'm in.

“I have to tell you, it was overwhelming [just] how much Christmas they are able to pack into a movie,” he continued.  “I’d turn up to the set every day and think, ‘I've never seen so much Christmas.’  Even reading the script, we were ice-skating one day, at a Christmas market for two days -- it was like every day was a different Christmas thing.”

Set in the busy world of advertising, Jingle Around the Clock follows the story of Chicago-based advertising executive Elle Bennet (Nevin), whose plans to reunite with college friends at Christmas are derailed by the prospect of a work promotion.  To her surprise, Elle is teamed with advertising campaign 'fixer' Max Turner (Cassidy) from the firm’s New York office, whose take on the holidays couldn’t differ more from her own.  As they work together, it’s not long before a mutual attraction develops, but when Elle realizes Max intends to relocate to Chicago to be closer to family, and apply for the position she’s pursuing, things take an awkward turn.

“There were many things that drew me to this,” said Cassidy of the project.  “I really liked the script and the dynamic between Elle and Max, which is kinda old school.  They're contemporaries, attracted to each other, disagree at work and both have a bunch of stuff going on.  It feels modern and accurate, but it's also really fun to play, as there are a lot of buttons to press.

“Max is somewhat of a fixer with the company,” he added.  “His job is to jump in and make things cooler or work better.  You could call him the ‘know guy,’ as he knows what to do.  The way he does that is to say, ‘This is how it needs to go’ and everyone listens.  I think prior to meeting Elle and working with her, that's how he has operated.”

It’s a trait Cassidy shares with Max.  “My wife will certainly tell you I am a know-it-all,” he laughed.  “One thing that Max and I share -- and I don't want to say we are Scrooges – is that we are both easily overwhelmed by Christmas.  From the tree, to the Christmas wreath [and everything else], Christmas can be a little too much for me.  What Max is doing in this movie is my preferred Christmas; he's posting up with his mom and sister and trying to take it easy.  The things I love about holidays are just chilling, eating more and sleeping more.”

In addition to the Vancouver location, a place Cassidy loves spending time, getting to experience a stress-free Christmas made the project even more appealing.  “It was actually pretty charming to celebrate Christmas early,” he admitted.  “I really felt I was able to enjoy it more in October than in December as there was a lot less pressure, and while I was pretending to be with family I wasn't.  That alone was a lot less pressure.  I come from a big family and didn't have to go to 14 people's houses.  I just had to go wherever the crew took me and pretend it was Christmas.  That was delightful.”

Almost 15 years have passed since the actor came to prominence, courtesy of his role as Zach Stevens in the hit Fox series The O.C.  He joined in the show during its second season and still counts his blessings for that opportunity.  “The O.C. was life-changing in some ways,” he reflected.  “It definitely was career changing.  I went from working in a restaurant to not working in one!”

He enjoys running into former co-stars like Ben Mackenzie and Rachel Bilson, and in the world of re-boots, would absolutely be down to reteam with them.  “I liked every single person I worked with on that show so I would do it in a second,” he shared.  “Getting Chris Pratt back could be a little tricky though.”

According to Cassidy, and those around him, Jingle Around the Clock won’t be the only time he graces the screen for Hallmark.  “I've never worked on a project where people have said to me more, ‘Oh, this is just your first one.’  Everyone was telling me, ‘You'll probably do 100 of these.’  That is so nice, so if Hallmark knocks again I will absolutely answer the door!”

Jingle Around the Clockwill premiere Saturday, December 22, 8 p.m. on Hallmark Channel as a part of its Countdown to Christmas programming event.