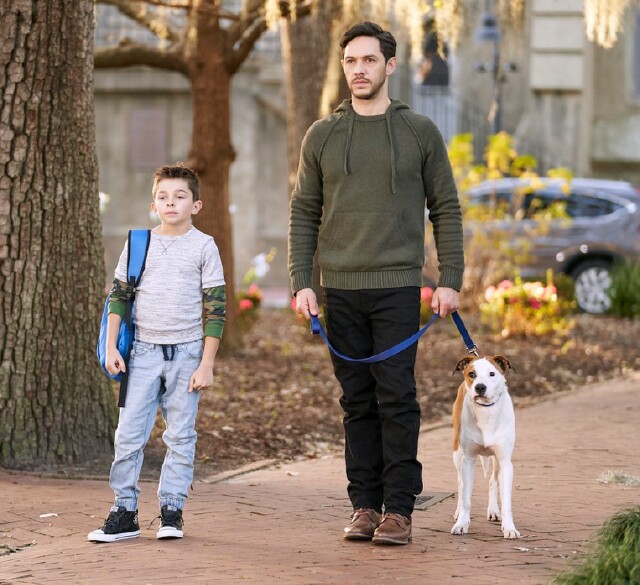 Since 2016 actor Michael Rady has been synonymous with Hallmark Channel and it’s Christmas programming.  After starring in three back-to-back holiday films -- Christmas in Homestead(2016), A Joyous Christmas(2017) and Christmas at Pemberley Manor(2018) -- the charming actor takes a detour this weekend with Love to the Rescue, a spring-themed love story co-starring Nikki DeLoach, some adorable kids, and a matchmaking pooch named Bruce (played by a real-life rescue dog named Zip).  "I have to say all of the Hallmark movies have been spectacular," Rady told MediaVillage in an exclusive interview.  "Hallmark is truly a great company to work for.  It feels funny even calling them a company, but to be realistic they are.  They're such wonderful people from the top down -- in fact, everyone involved.

"I feel there’s a trickle-down effect that works for them because I’ve noticed they don't seem to hire bad people," he continued.  "That's been my experience anyway.  It's all good vibes.  Nikki was wonderful.  We're both parents to kids roughly the same age, so we hit it off.  We discussed parenting and to connect with someone about kids was tremendous -- no BS.  We were all there for the same reason and it helped a lot having everyone on the same page.”

In Love to the Rescue, it's a case of the rescuers becoming the rescued as divorced single mom Kate (DeLoach) and widower Eric (Rady) agree to adopt Bruce for both her daughter and his son.  Sadly, having two families interested in the same dog initiates a major dilemma.  Not wanting to disappoint either child, they agree to co-foster Bruce until a determination is made as to who can provide the better home.  While not the ideal situation, Kate and Eric bury their differences for the sake of the kids.  However, the more time they spend together, the more they begin enjoying one another’s company.  But with so many personal obstacles to overcome, the blended home that would be perfect for all involved may never come together. 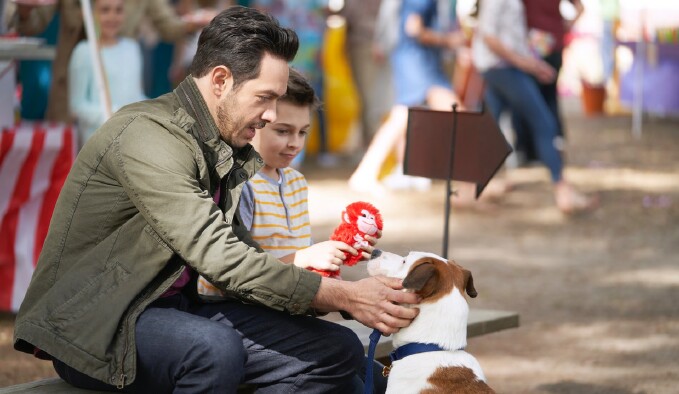 According to Rady, playing a super-dad like Eric came naturally.  "I try my best to be a good dad, but a superdad?  My kids would have to be the judge," he laughed. "I'm a bit of an amalgamation of the Eric and Kate characters in real life.  I can roll out of bed as the bus is coming and the kids are dressed and go, 'What's happening?'  Then I can turn on super-dad for sure.  I'm not as type-A as Eric, but I feel parenting a six-year-old, four-year-old and a two-year-old, with every passing day you get more experience.  It's nice playing a parent as I have a lot of experience I can bring."

Another of Eric’s character traits Rady admired was his philanthropic side.  "I loved that about Eric," he said.  "Being of service to others is one of the most important things in life.  Right now, I'm immersed in the day-to-day of raising three kids with my wife, so it's a constant dialogue as to how we can all be involved in helping others.  We do it over the holidays, [by] adopting families and bringing Christmas to those maybe less fortunate.  It's been beautiful watching the kids do that and bring some magic and meaning to Christmas; that’s something I am proud of.  I wholeheartedly believe in giving back as that's how I was raised, and I do want our kids to be a part of that."

When it comes to his career, Rady has been blessed.  He's one of those actors who effortlessly weaves between the loveable lead but also dabbles in playing the bad guy.  "That's the goal," he shared.  "A lot of actors do one specific thing and I have been lucky; like in [Lifetime’s] UnReal I got to be a bit of a grey character, but I like all the colors and like playing with them."

That variety of projects includes the 2013 romantic comedy Random Encounters, which teamed him with a pre-Suits Meghan Markle. "That's my biggest claim to fame and biggest contribution to the globe," he laughed of the project.  "[Meghan] was like the third lead and we had a great time working together.  Then she became the most famous person on the planet and it was re-released with her on the cover.  There was a pretty sensual scene that I now find hilarious.  But she was so sweet and lovely.  To say I know her is kind of ridiculous; we spent only three weeks together.  Still, watching the circus that surrounds her now is interesting."

While Rady awaits his next Hallmark project, he's currently hunkered down enjoying some good family time and working on the house his family purchased in June.  "I'm looking forward to that e-mail from Hallmark for the next Christmas movie," he said.  "I'll jump at the chance to do that!  And there are a few loose ends in [Love to the Rescue], so if there's a sequel, I'm not only on board, I'm captaining that ship."

Love to the Rescue will be telecast Saturday, March 23 at 8 p.m. on Hallmark Channel as part of the network’s Spring Fever programming event.