Moneyball for Advertisers: The Future of TV Sports 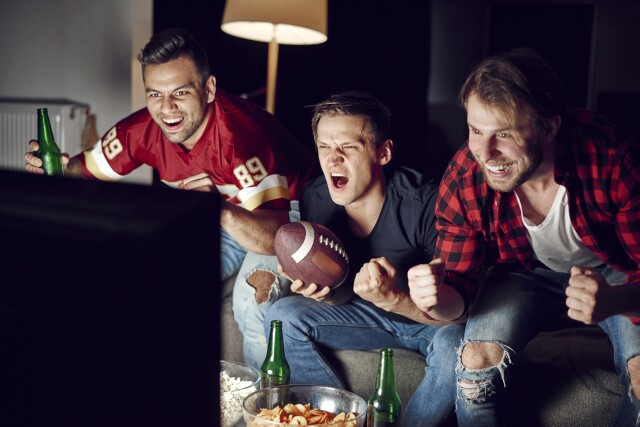 With all ratings, including sports ratings, going down due to accelerating floods of new program choices for the viewer, the amount of money being paid for sports rights continues to go up. How can that be? This report compiles relevant datapoints to form a picture of what is going on now in TV sports and where it is all leading.

Let's start with the impact of fragmentation on TV sports ratings. World Series average ratings declined from 32.8 to 8.1 between 1980 and 2019. However, that was a real cultural shift, not just more viewing choices. The popularity of watching baseball on TV itself declined, possibly because viewers, particularly younger ones, didn't appreciate the chess-like strategy going on beneath the seemingly slow-moving surface of the sport, according to marketing guru Bob DeSena. For the faster action game of football, Super Bowl and NFL ratings are down relatively slightly over the past ten years, while college football has shown greater erosion: a study by Larry Novenstern and myself shows that average ratings from 2008 to 2019 have declined by about half.

In the face of smaller audiences, what happened to the prices of buying ads in TV sports?

Standard Media Index (SMI), a global source of advertising spend and pricing data, shows that while the average paid :30s unit costs for all programs on broadcast TV declined about -22% between 2014 and 2019 (cable prices down -21%), live sports on broadcast TV prices declined 12% over that period (cable -32%). Also, if you extend the analysis into the pandemic year 2020, you find that, ironically, broadcast TV live sports ad prices were down only -3.5% from 2014. It was more important to advertisers during COVID in 2020 to get those sports spots and so they paid more from them.

We all know that if audiences are getting smaller while prices are staying flat or only contracting slightly, negotiated CPMs for sports have to be going up -- and they have always been high to begin with. So, we might expect to see advertisers lowering their allocations to sports as a result of escalating CPMs. (NFL Regular Season eCPMs are on par with broadcast prime per this SMI report.)

However, SMI shows that in the first half of 2021, TV sports (including live and all other sports programming) accounts for 26% of all adspend on U.S. television, up from 21% in the same period in 2019. In the technology category, it is 44% of adspend, up from 33% in 2019. In fact, in every single vertical sports TV spend is a larger allocation of the total TV budget now than it was pre-COVID: 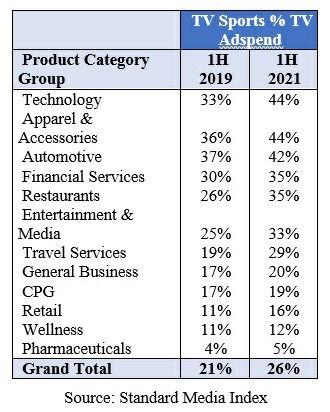 How do we explain this striking shift to sports? Part of it is of course the reduction in new entertainment content readiness as a result of COVID, but it's more than that.

Brad Adgate has done his usual definitive article in Forbes, this time zeroing in on how strongly TV sports is coming back from COVID, in terms of ratings and advertiser spending, and in his article he quotes my saying that a good part of the reason for this is ROI.

TV sports boosts viewer attention to ads (plus heightening the viewer's emotions) and this results in greater advertising effectiveness per dollar, despite high CPMs: ROI supersedes CPM because the CPM is already reflected in the “I“ of ROI. Once the ROI is proven higher, as in this case, the buyer need not think about the CPM anymore. Sports has been validated over and over again by numerous researchers and again by the $2.2 trillion sales vs. $48 billion advertising Bill Harvey Consulting ROAS study sponsored by Fox: 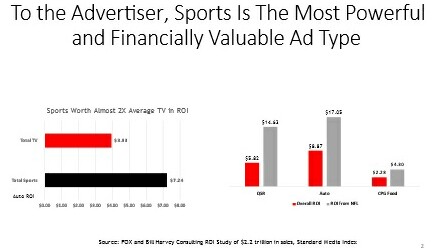 At our request IRI has kindly granted us the right to publish their own analysis of CPG TV sports average ROI: 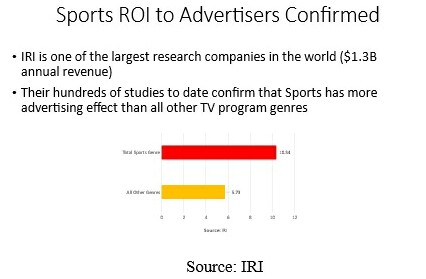 Sports is even more effective than this for ads that contain psychological factors aligned with sports, such as Achievement, Competency, Fitness, Heroism and Power, as analyzed by RMT DriverTags.

Sports rights fees paid by networks have been skyrocketing, despite ratings, CPMs, ad prices and COVID. Between 2001 and 2019, total revenue to all NFL teams went from $4.28 billion to $15.26 billion according to Statista. Amazon just bought exclusive streaming rights to NFL Thursday night games for $1 billion per season; that's $67 million per game! Now that the FAANGs are into it, expect the rights fees bids to escalate mightily.

In the first week of the new college football season, Fox reports the first five games average audience is up +80% over the comparable average in 2019. Kicking off Fox's 2021 College Football (CFB) Week 1 coverage on Thursday night, Ohio State vs. Minnesota averaged 6.3 million P2+ linear TV viewers, the most watched Week 1 CFB Thursday game of all time on any network. Through five telecasts the 2021 Fox College Football season total linear audience (4.2 Million P2+) is up +80% versus the comparable season-to-date average in 2019 (2.3 million P2+). That was also the third most streamed Fox CPB regular season game of all time with an average minute streaming audience of 133,863 P2+. @CFBONFOX social accounts drew more than 25 million views in Week 1, up +171% over Week 1 of the 2019 season, and the most-viewed regular season week in CFB in Fox social history. The @CFBONFOX Twitter handle enjoyed its most-viewed week in the account's history, with 18.1 million views, smashing the previous record of 9 million, set during the 2019 season ahead of Michigan vs. Ohio State. That Saturday's video of "Jump Around" from the Penn St. / Wisconsin telecast is the most-viewed video in @CFBONFOX Twitter history with more than 9.5 million views.

You can see from these results that the sports TV wave is far from cresting. It is just beginning to build. Streaming will be where a lot of sports TV goes, as all TV eventually goes that way. Larry Novenstern, for many years the head of sports media at BBDO making some of the biggest sports buys in the business for top clients, is bullish on the marriage of sports and streaming, saying about streaming: "The consumer is in charge of what they want to see and pay for." In the current transitional media world, the impact of TV sports ripples from linear and streaming across to all forms of social media, merchandising, influencer marketing, and word of mouth.

Associating your brand with sports has long-term brand bonding effects, not just impact on short term sales performance for advertisers, as shown by a series of studies conducted for WarnerMedia by Kantar and by Dynata. This extends beyond those who watch the game in which you advertise, when the brand uses the association with the NCAA for example across its advertising everywhere, the brand's standing rises among sports fans. For example, where such ads ran across one media platform, a credit/banking brand achieved an +11% increase in being perceived as "a brand that shares my passion for sports," which when the ads linking the brand to NCAA ran across two media platforms (e.g. TV+digital) went to +32%. Across two platforms the lift was +33% for "Makes me likely to consider the brand the next time I apply for a card."

Brad Adgate, for many years the head network television researcher at Horizon and today a Forbes regular columnist and media consultant, has this to say: "Despite a drop in ratings, when sports are compared to other genres the declines aren't nearly as steep. Sports are watched by many in real time which still accounts for something. There are sponsorship opportunities, strong fan engagement and a desirable audience for many. Despite the escalating cost in rights fees that programmers pass along to advertisers, sports will continue to be a must buy for dozens of blue-chip marketers. Additionally, there will be a steady flow of new advertisers and product categories driven by technology that will increase demand. With streaming opportunities also available the future looks very bright."

Now that the 2020 Census has shown that minorities sooner than previously expected will collectively be the majority, soccer will become a major U.S. sport. Women's sports are a greenfield for the growth of TV sports. Future technologies, such as the invention by a former top military technology Israeli gent which allows viewers to choose their own camera angles, to future virtual reality games in which you can play your favorite athlete and rerun a play he fumbled to show him how he should have done it, are in the works.

Hang on for a wild ride and keep your eyes on where the puck is going.