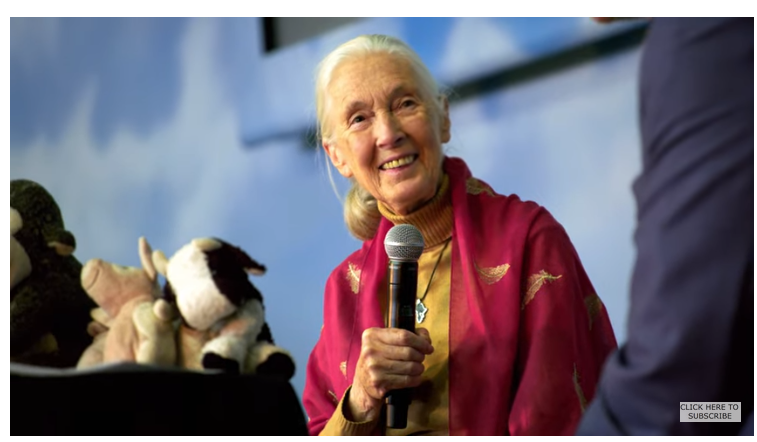 The first Earth Day rallied folks around the country, flooding streets with some 20 million who pledged to save the planet. It may seem archaic today when the notion of gathering people is a death threat. Yet as isolated as we must stay right now, as the 50th Earth Day dawns Wednesday, the reason for the day remains. While no one person can carry the banner to save the planet, one slight, old woman is about as close anyone could get. Jane Goodall is an unlikely hero, but she accepted the mantle long ago. Goodall spoke with MediaVillage related to her upcoming special, Jane Goodall: The Hope, which caps National Geographic's Earth Day's Golden Anniversary programming. "Every single person matters and has a role to play," Goodall said. "Every day I think of people, think of their life, about where their food comes from, clothes come from. Is it cheap because of child labor? Then I act less selfishly and less greedily."

Goodall, 86, understands the interconnectivity of life and how each action, regardless of how small, eventually leads to more significant results. Having accomplished so much, chiefly helping to make the world realize that chimpanzees use tools and exhibit very human emotions (not surprising since we share 99 percent of our DNA with them), Goodall points to her work withRoots & Shoots as her legacy. Goodall created the global non-profit movement 29 years ago. It spurs youth to identify and help solve problems in their communities, and like so much with Goodall, it began – and somehow remains – personal. The first meeting of Roots & Shoots was in her home in Tanzania. "I first dreamed of Africa when I was 10," she recalled. "Everybody laughed at me. My family had very little money. World War II was raging, and I was just a girl, and girls didn't do that sort of thing. My mother didn't laugh at me but said: 'You will have to take advantage of every single opportunity.'"

And so she did, in a well-documented life. This film shows Goodall with her grandchildren and talking to thousands of people. Audiences are rapt by her chimp calls. A few fleeting moments of her backstage are illuminating; Goodall trots out on stage; she's hyper-aware of her mission and that time is not finite. By nature, Goodall is a shy woman, someone who never sought the spotlight, but once thrust into it realized how much good she could accomplish. Additional specials simulcast on National Geographic and Nat Geo Wild and streaming on Hulu and Disney + include Born Wild: The Next Generation. Hosted by ABC's Robin Roberts, she opens with, "Never has it been more clear how inter-connected we are on this planet, the global pandemic underscoring the fact that we truly are on this together."

Before travel ground to a halt, Nat Geo had checked in with explorers and scientists around the world, monitoring different ecosystems. Rather than rely on a live special as the network has pulled off before, this special weaves in previously filmed segments. National Geographic explorer and marine photographer Brian Skerry follows a pod of mother whales and their calves in Humpback Whale Calves in the Waters of Hawaii. Conservationists and National Geographic explorers Dereck and Beverly Joubert follow a pride of big cats in Lion Cubs in the Savannas of Kenya. Dr. Rae Wynn-Grant, a researcher, tracks how human encroachment changes migratory patterns, and in Black Bear Cubs in the Forests of Minnesota,she finds cubs who are all of 5 pounds. Movie star Chris Hemsworth takes viewers down under in Koala Joeys in Australia's Reserves which features two young koalas, one which survived the wildfires and another being released into the wild. The day also features Jane and Before the Flood, a documentary chronicling how waters return to swaths of Africa annually.

"The need to protect our planet has never been more urgent, and we're using Earth Day 50th as an opportunity to inspire viewers through the wonders of our planet and its incredible species for viewers around the world," said Courteney Monroe, president, National Geographic Global Television Networks. "With the Earth Day takeover across all of our networks and platforms, we are able to reach the largest audience possible to celebrate this momentous day and ensure that viewers fall in love with our planet and act to protect it."

Earth Day prompts us to consider what changes each person can make. Goodall suggests planting trees or donating money to plant trees. She also recommends eating a plant-based diet, and to consider – every day, not just on April 22 – to leave the world a little bit better. "If you act locally and see the difference you make, you clean up a stream, make an organic vegetable garden, take produce to the zoo, look after sick animals, and when you know other people are making that difference," it all helps, Goodall noted. "Think about how you live and make ethical choices," Goodall said. "How do you treat people? How do you treat animals? Do you bother -- and although just you doing that won't make a difference -- picking up a piece of litter the cumulative effect is huge."