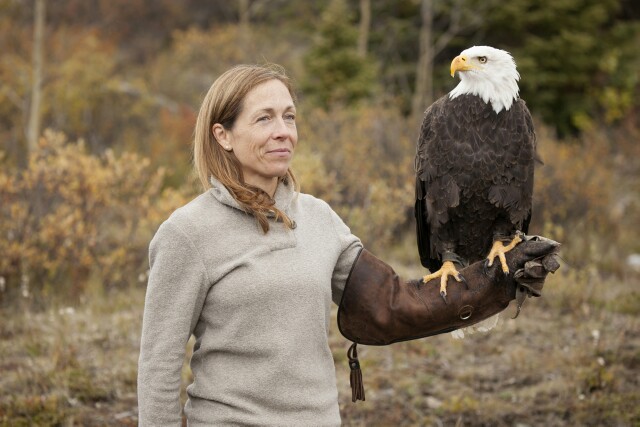 Perhaps it’s a practical response to life’s demands, but most people adjust childhood dreams.  Otherwise the world would be overrun with astronauts, firefighters, actors and ballerinas.  Yet Michelle Oakley is one of the rare people not only doing precisely what she always dreamed of … and, even rarer, making the world better while doing so.  Her Nat Geo WILD show, Dr. Oakley, Yukon Vet, showcasing her adventures saving animals, returns for its sixth season Saturday, Oct. 6.

Though Oakley lives in the Yukon, where winter temps plummet to 69 below zero Fahrenheit, she’s talking with me in the climate-controlled lobby of a Beverly Hills hotel.  Her daughters, Sierra, 21; Maya, 19, and Willow, 14, often seen on the show, surround her on the couch.  Oakley talks as openly and forcefully in person as she does on the series. Of course, it’s not as if there could be multiple takes while sedating a Kodiak bear, then scurrying out of his way when the tranquilizer was not quite enough.

“There are no do-overs with wildlife,” Oakley says.  “You either catch it or you don’t.”

She works at catching them by riding shotgun in helicopters, skiing, wading through rivers, running and aiming her tranquilizer gun at fast-moving targets with the precision of a sharp shooter.  Oakley wears her badass badge proudly.

That independence was fostered growing up in Munster, Indiana, a town changing from rural to suburban. An outdoorsy kid, she explored the paths that led to the nearby forest and searched for animals, particularly wounded creatures she could try to nurse back to health.  When she wasn’t tracking woodland creatures after school, Oakley was watching any nature documentary she could.  When a series on Jane Goodall aired, she recorded it, back in the VCR days.  Oakley watched that tape until it finally wore out.

To share space on the same network as her hero thrills her.  (Read about Nat Geo’s award-winning documentary Jane here.)  Oakley recalls meeting the primatologist at 11.  Her consistently supportive mom allowed her to skip school and drove her animal-crazed daughter to Chicago’s Lincoln Zoo to meet her hero. With the zealous intensity and unshakeable belief found in children, Oakley blurted her adoration to Goodall and her plan that she was going to go work with her.  Rather than scoff at the child, Goodall told her that she believed she would.

Goodall was right, though instead of studying the chimps of Tanzania, Oakley studies a wide range of animals over vast tundra.  She admits that when she initially applied for a summer program during her studies at the University of Michigan Oakley was not sure where this huge stretch of northwestern Canada was.  “My choices were frogs in Costa Rica or ground squirrels in the Yukon,” she recalls.  “I literally had no idea where the Yukon was, but it sounded kind of like Yucatan which I imagined to be very wild, and very warm, and I liked squirrels and I liked the thought of camping all summer.”

The area she covers is roughly the size of Alaska and only about 30,000 people live there, most of them in Whitehorse.  Oakley speaks with the reverence found among those who have experienced unsullied nature and who understand the damage mankind is wreaking.

This season, she wrangles a herd of bison as it heads to a new home and helps an eagle with head trauma in the Yukon.  She also travels to the French Alps to learn about the indigenous ibex and in Sweden learns about the brown bear population.

All of this helps with her clinic, run from her home.  Oakley also has a mobile vet unit, which allows her to go where the animals are.  She tends to wolverines, bison, black bears, owls, eagles, caribou, moose and lynx. On the show, the veterinarian has taken on some tough cases.  Working with assistants, she extracted dozens of quills from a dog after it had a serious fight with a porcupine.  She even found a small quill that had lodged under the pup’s bottom eyelid and some in his throat.

Oakley has also tended to an especially gaseous moose calf and relieved its bloating.  She once scooped chewed grass out of the infected cheek of a reindeer, then medicated the infection.  Oakley has even castrated wild boar, which may well be the single best example of what “badass” means.

None of this is for the delicate who prefer their animals to be kittens on the couch.  But that’s why we watch. Where most people would run away, say from a bear’s enclosure, Oakley very carefully moves in.  She knows her patients, admitting, “I was really pretty terrified of that bear.”

That Kodiak was about 1,200 pounds.  “He was anesthetized and woke up and stood up and we were all scattered around,” Oakley recalls of that shoot.  “I am responsible for everyone, but of course when my daughter was there, it was a whole other thing.”

She smiles at her daughters. Oakley understands the most basic part of animals – mothers protecting their young, no matter the danger.