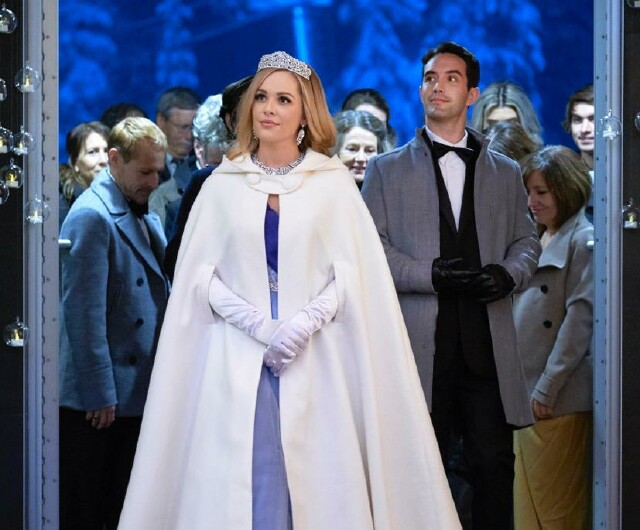 Natalie Hall made her Hallmark Channel debut in 2011's Love's Christmas Journey and was last seen on the network in 2012's The Seven Year Hitch.  Now, after a lengthy sabbatical, she's back in A Winter Princess, part of Hallmark's Winterfest programming event.  "After The Seven Year Hitch with Darin Brooks, I moved back to New York for many years and did theater," Hall said when MediaVillage asked about her lengthy absence.  "I hadn't done a Hallmark movie since and I honestly love working with Hallmark.  They like strong, independent, career-driven women and that's something I've always respected and admired.  They're one of the networks that has always done that, but I just got busy with other stuff and I am so happy to be back.

"It did get to the point that I was doing a lot of dark stuff," Hall continued.  "I'm still working on The CW’s Charmed and I wanted to do something light and happy.  I love that world, and the [Hallmark] viewers are so lovely, so I was thrilled to be able to do it again.  I had such a great experience doing the film."

In A Winter Princess she stars as Princess Carlotta of Landora, who while undercover on a year-long sabbatical from her royal duties takes a regular job incognito as Carly at the Snowden Peak ski resort.  As Carly's birthday approaches (calling her home for a family celebration) Snowden's event planner unexpectedly quits days before the annual Snow Ball Gala.  Eager to prove herself, Carly gladly accepts the challenge. However, sharing planning duties with Jesse (McNally), the resort owner’s handsome brother, proves challenging -- as does the surprise arrival of her twin brother Gustav (Casey Manderson), the Crown Prince of Landora, who reluctantly agrees to keep her identity a secret.  As Carly and Jesse forge ahead with planning the gala, they decide a celebrity would enhance awareness and help sell tickets to support the resort.  That leaves Carly with a dilemma -- come clean or possibly let the resort go into foreclosure?

"It’s usually the Prince's story being told, so it was nice to flip it," Hall said of the storyline.  "I feel honored to be able to tell this Princess story.  I'm sure people that find themselves in positions of power or royalty do crave normalcy.  It's the same for celebrities -- they want to walk the streets alone.  So, how I thought of it was, she knows how to be a Princess and function in that world, but she also wants to know how to function in everyday life."

Growing up a dancer, Hall was no stranger to the princess tag.  "I've done some theater with royalty elements," she explained.  "Doing dance and ballet you are kind of a Princess, so I am used to that sort of elegance, but I don't recall if I wore a crown during theater stuff.  I don't think I dreamed of marrying a prince, but when Meghan Markle got married I was like, 'You go!'  Growing up in Canada I was always fascinated with the British Royal family."

In fact, royalty does run in Hall's family, as she recently discovered.  "I did go to Europe this past summer for a wedding and while in Scotland did a genealogy test to find my ancestry," she revealed.  "I found out my twice-removed great grandfather was Robert I, who was King of Scotland.  It was crazy finding that out, and while I'm not royal or anything, when I was offered this I thought it was kind of fun and I was channeling my way, way, back ancestor.  So, I am basically channeling my everyday self."

Hall admitted she researched royal etiquette for the role, and while her character "thankfully" wasn't required to have a British accent, production had some challenges.  "It was definitely the hardest weather wise," she shared.  "With the elements and being so high up (in Big White, British Columbia), I'd walk up a hill and be out of breath.  It's a beautiful mountain town and funnily enough, growing up I did ski there.  But when I was there I had layers of clothes on.  I was able to function, but walking and talking is another thing.  It was so cold!"

For Hall, one of the funniest things about filming A Winter Princess was her initial meeting with McNally.  It was not at all a Hallmark scenario.  "Chris and I showed up first and were the only people in this big scary hotel," she laughed.  "We didn't know one another, but met the next day and bonded over the fact we were basically in The Shining.  The entire mountain was closed, so it was just us.

"We hit it off right away and grew up like 15 minutes apart in Vancouver," she added.  "He's such a nice guy and as sweet in real life as he is on camera.  It was super easy to work with him and we developed a nice friendship.  There were no axes and no one went crazy!  I think if I'd gotten an axe in the beginning [even as a joke] he might have been uncomfortable working with me."

A Winter Princess is telecast Friday, January 18 on Hallmark Channel as part of the network’s annual Winterfestprogramming event.