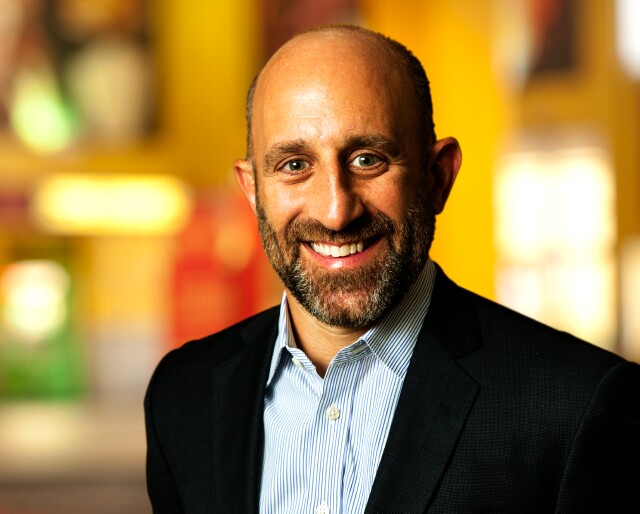 In a world where tiny screens are ubiquitous and distractions abound … where audiences are fragmenting and Millennials become more elusive every day … one man made the journey from national television sales to a media utopia filled with big screens, big audiences and big-time engagement.  That man is Scott Felenstein, the newly-minted Executive Vice President and Chief Revenue Officer of National CineMedia (NCM).

Only nine days into his tenure when we spoke, Scott was already a passionate evangelist for the power of cinema advertising.  Why did he decide to go to the movies?  The move to NCM unites his personal passion for film with a storied advertising career.

Scott got his start in network buying at Ogilvy and Mather and Bozell, Kenyon, Jacobs & Eckhardt.  Stints at CBS Sports and Excite@Home followed before he landed at Discovery as an Account Executive.  He quickly rose through the ranks, ultimately becoming Executive Vice President, National Advertising Sales, overseeing all of Discovery’s networks across all platforms and managing relationships with top agencies and clients.

Transitioning from small screen (for a major television network group) to big screen (for the largest cinema advertising network in the U.S.) has required an education for Scott.  He’s quick to point out that movie advertising isn’t just for splashy product launches and “cinema-worthy,” Super Bowl-style creative.  He believes it’s an effective medium for building brands and driving sales at any time of year, with any creative.

The following are highlights from our conversation.

Ingrid Laub:  What are the biggest differences between television and cinema advertising?

Scott Felenstein: You’re getting your advertising message on the biggest possible screen in front of the most captive audience.  When people are watching television at home, we don’t know if they’re looking at their smartphone or they’re on their iPad or what they’re doing. When you’re in a movie theater, you’ve decided you’re taking the time and you’re going to go immersively experience a movie for two hours.  It’s hard to imagine a more engaged audience than somebody in a dark theater looking at a giant screen.

Ingrid:  What’s the message you’d like your clients to take away from NCM’s Upfront presentation?

Scott:  The interesting thing, aside from the engagement, is the audience.  Trying to reach young people today in traditional media is very challenging.  We’re a place where you can reach that audience and reach them at scale.  I don’t want to beat everybody over the head with the words “Millennial” or “Gen Z,” but if you’re looking for young audiences and you’re looking to reach them in a great environment we have both of those things, all in one shot.  When you add in our new Noovie pre-show and digital properties launching later this year, and the incredible 2017-18 movie slate, it’s very compelling. 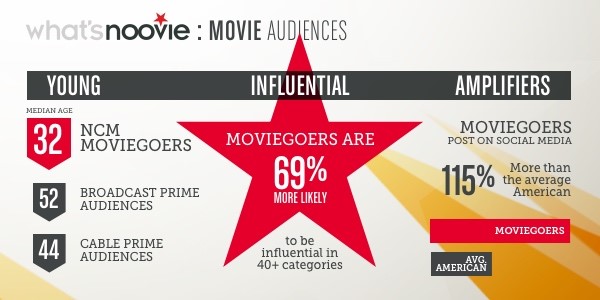 Ingrid: What are the movie industry and exhibitors doing to keep them coming?

Scott:  They’re investing billions of dollars in content. You can draw an audience on a show in digital, but the quality is just not the same.  People go into theaters for a great experience with quality content in a completely brand-safe environment.  The movies are all rated so you know what to expect. Digital’s a little bit of the Wild West and you never know what content is going to pop up.

Scott:  We can target by location, by rating or by genre.  We had challenges when I was working in cable because we couldn’t do regional advertising.  If you had somebody that was even trying to do something simple like split copy, we couldn’t do that.  It’s really interesting to me that we have so much flexibility here at NCM because of the way the network is set up.

Ingrid:  Do you have children?  How have their media consumption habits impacted your professional perspective?

Scott:  I have three boys ages 14, 12 and almost 9.  They watch television and consume content much differently than I do.  They watch a lot of live sports and then access a lot of content on demand either on the television or through various channels on the iPad or on their phones.  They are big movie fans like their father, which gets me to family movies like Boss Baby.  My oldest and I see all the superhero movies or whatever the big PG-13 release is that weekend.   While their video content habits are much different than mine, their movie-going experience is very similar.

Ingrid: What advice would you give to young people entering the media industry today?

Scott:  I still think there is tremendous value in starting your career on the agency side, especially given the incredible changes in the media landscape over the last few years.  Starting there gives you great training and a view of all of the media options available to advertisers.  Once you have good insight into everything, you are better informed on where to take the next step in your career.