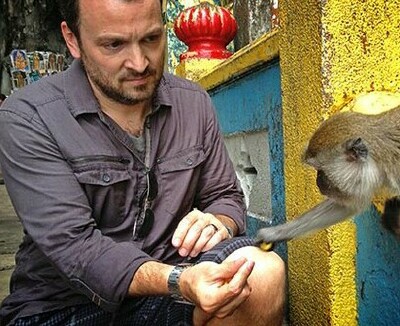 National Geographic Channel tonight is following up its three-part miniseries “Eat,” about all things food, with the launches of two new observational reality series that further explore the topic – “Eric Greenspan is Hungry” and “Chug.”

It’s not easy for reality series of any kind that focus on food to stand out from the rest in what is clearly a burgeoning program category, but these two manage to do exactly that.

“Eric Greenspan is Hungry” features the celebrity chef known for his fancy Los Angeles restaurants traveling around the country and getting down and dirty in pursuit of local ingredients (mostly of the four-legged variety) for regional recipes. “Chug” follows comedian and television host Zane Lamprey as he travels to foreign locales both urban and exotic to sample specialty cocktails and other potent beverages. “Chug” is all about alcohol, but it fits into the food category because Lamprey also indulges in local culinary delicacies during his travels.

“Chug” will be noted in the media history books as the first series fully fan-funded via Kickstarter to be telecast on an American television network. (In case you are wondering, the scripted gay drama “DTLA” telecast two years ago on Logo was a project partially funded via Kickstarter.) Lamprey and his wife Melissa Schilling, who is also an executive producer of “Chug,” were able to complete six episodes of the show before finding a network to run them. It was Schilling’s idea to make food a component of this series -- rather than having Lamprey focus exclusively on alcohol -- to make it accessible to a broader audience.

If “Greenspan” is a domestic travelogue, “Chug” is in every way an international travel series, taking viewers to such far-flung locales as Kuala Lumpur, Malaysia and Sydney, Australia. In that regard it is easy to place “Chug” within the traditional National Geographic wheelhouse, but with this show there is a twist. It seems no matter where Lamprey goes, alcohol is the universal language.

“Greenspan” offers the unusual opportunity to watch a man widely acknowledged as one of the top chefs in the country – one who has been instrumental in the success of many acclaimed restaurants in Los Angeles, including several of his own – travel to areas he might not otherwise be found and become involved in the hunting, killing and butchering of wild creatures that will eventually become primary ingredients in meals prepared using local recipes and cooking techniques.

In that light, “Eric Greenspan is Hungry” may be more about People Eating Tasty Animals than People for the Ethical Treatment of Animals will want to see, but the stories it tells provide much food for thought.

At first blush it may sound harsh or even unwatchable, but “Greenspan” is very thoughtfully produced, generally taking care to not make the hunting and killing too disturbing. The series reinforces the fact that the animals that end up on Greenspan’s plate have been living perfectly normal, natural lives in the wild right up until a very bad (and very brief) moment or two when it all comes to an abrupt end. That is certainly preferable to a lifetime of misery in a hellish factory farming complex.

Watching Greenspan (pictured above, left, with old friend and series co-star Josh Klausner) get to know people in different towns and communities in what the media might describe as flyover country – places like Warren, Texas; Tunica, Mississippi, and Breaux Bridge, Louisiana -- while they capture, butcher, cook and consume feral hogs, wild turkeys, American buffalo and other wildlife, all the while witnessing first-hand the great respect people have for the animals they capture and eat, is an experience unlike that associated with typical food programs.

Indeed, Greenspan is quite outspoken about the current state of food shows. “The Food Network is going the way of MTV,” he told me at a National Geographic Channel press event in New Orleans a few weeks ago. “It’s all competition shows. They have taken over.” He added that he is excited about NGC's recent foray into food programming like “Eat” (in which he appears) and his series, because they provide viewers with opportunities to “learn about food and culture.” Educating people about food, he said, isn’t easy to do, at least not in a way that entertains them and holds their attention. Culinary competition shows, on the other hand, are in his opinion “no-brainer programming.”

Greenspan said his show “is about people, breaking down stereotypes.” He described its approach to the study of American cuisine as “micro-regionality.”

The experience of shooting the first six episodes of his series changed his perspective on “handling meat,” Greenspan continued. He was especially impressed by the fact that the people he met have a bond with the animals they eat and leave nothing behind after preparing them.

“It has changed the way I feel about farm to table dining,” he concluded.