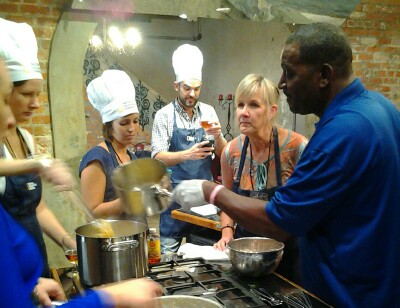 These days it seems there are more programs about food on basic cable networks than there are viewers available to watch them. It follows, then, that introducing new specials and series on this burgeoning subject, especially on a network not known for food programming, calls for special marketing and publicity strategies – something more than standard screeners and press releases.

National Geographic Channel, a network that in recent years has become known for its uncommonly creative publicity and promotion practices, faces just such challenges in the month ahead when it will debut “Eat: The Story of Food,” a three-night, six-hour documentary miniseries beginning Friday, November 21 that should leave sated anyone hungry for fresh information and fascinating historical footnotes about the title subject, and two new ongoing half-hour series, “Eric Greenspan is Hungry,” in which the celebrity chef travels around the country in search of the best meat, poultry and shellfish recipes, and “Chug,” a series in which comedian and TV host Zane Lamprey travels the world sampling the finest cocktails (and some interesting cuisine). “Greenspan” and “Chug” debut on Monday, November 24.

At first blush “Eat,” “Greenspan” and “Chug” might not seem all that different from the food oriented fare on other information and lifestyle networks; in other words, it would be easy for them to get lost in the massive menu of food shows already available to those with insatiable appetites for same. So NGC decided to make certain that reporters and bloggers would learn as much as possible about them by hosting a two-day, three-night event last week in New Orleans filled with activities involving food, many of them cleverly tied to these three programs and all of them including talent from these shows who were always ready not only to discuss their own projects but to offer guidance, advice and opinions about whatever was happening (or being consumed) at any given moment.

The event kicked off with dinner at Commander’s Palace, since 1880 one of the finest and most consistently acclaimed restaurants in the city. The meal was preceded by a screening of the first hour of “Eat” and a press conference with three of the more than 70 chefs, food experts and scientists seen in the miniseries: Author and television personality Simon Majumdar (host of Food Network’s “Iron Chef America,” “The Next Iron Chef” and “Cutthroat Kitchen,” among others), Eric Greenspan (who provided the liveliest moments of the press session by taking shots at the culinary competition shows on Food Network and Bravo, calling them “no-brainer programming”) and Anna Boiardi of the now-legendary Chef Boyardee food dynasty. They were accompanied by Pamela Caragol Wells of National Geographic Studios, an executive producer of “Eat.”

The long (and very filling) day that followed began with the de riguer coffee and beignets at Café du Monde, followed by three hours of cooking instruction at the New Orleans School of Cooking, during which writers were divided into teams and learned the basics of Louisiana cooking. (A side note: My talents in the kitchen begin and end with scrambling eggs and making pasta, but I was chosen as one of four team leaders during this activity. Fortunately, a writer I chose to be on my team, Mary Beth Albright, later revealed that she had been a competitor on season seven of Food Network’s “The Next Food Network Star.” Mary Beth, who came in second in that competition, proved to be an invaluable team member.) 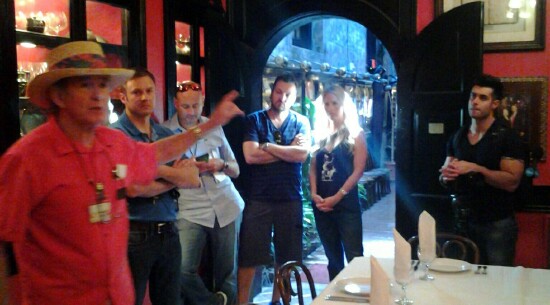 The extended cooking lesson was followed by a fascinating walking tour to several historically significant New Orleans restaurants, including Antoine’s (pictured above), Arnaud’s, Café Soule and Tujague’s (the second oldest restaurant in New Orleans). The detailed histories of these restaurants – and in most cases the past and present meals served within – reflect and intersect with so much world history and international culture that it all fit quite well into the National Geographic of things.

The following day’s activities consisted of a screening of the first episode of “Eric Greenspan is Hungry” and a press conference with the outspoken chef at Le Bayou Restaurant, followed by a screening of the first episode of “Chug” and a press conference with series star Zane Lamprey at the Museum of the American Cocktail. (Lamprey, formerly the host of “Have Fork, Will Travel” on Food Network and “Drinking Made Easy” on HDNet, funded the first six episodes of “Chug” through a Kickstarter campaign.) The event concluded with dinner at Root, which was recently named one of Bon Appetit’s 50 Best New Restaurants.

One might be tempted to conclude that expressive personalities such as Eric Greenspan and Zane Lamprey (who, among other things, is known for leading very loud group toasts in restaurants, which surprised other diners at Root) might not qualify as typical hosts of National Geographic Channel programs. As we got to know them during the New Orleans food event, however, it became increasingly clear that they will likely bring new life (and perhaps new viewers) to the network, and that is never a bad thing. Together with Jason Silva of “Brain Games,” these men could open the network up beyond its traditional reputation as a destination that educates first and entertains second. Their respective programs manage to do both and to do them quite well.

As for the New Orleans event itself, everything about it made perfect sense. With viewing options increasing exponentially, seemingly by the day, it is becoming ever-more difficult to call attention to new series on broadcast or cable networks. Given that reality, it is remarkable that so many networks are actually cutting back on their publicity efforts, largely limiting them to e-mails featuring links to online “screening rooms” that don’t always work and an old-school press release or two. Events of this kind, when they are done right, can generate awareness for programming above and beyond most of the rest. They also do much to keep an entire network top of mind in the months that follow.