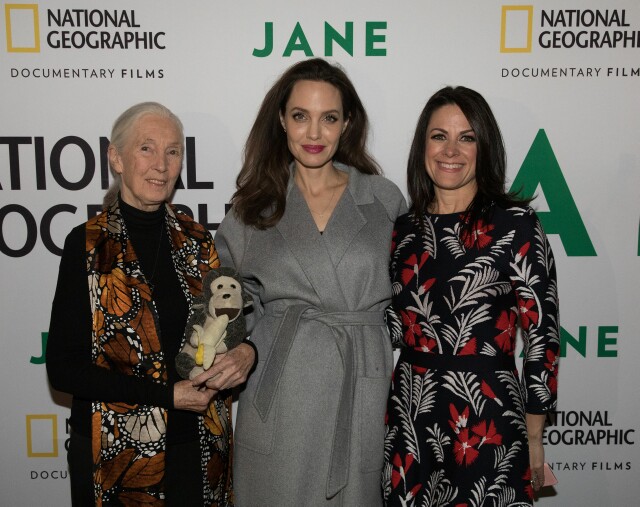 National Geographic on Monday orchestrated its largest publicity event ever with its premiere screening of Jane, a documentary about primatologist and anthropologist Jane Goodall that will be telecast on the National Geographic channel in 2018.  The film -- as thought-provoking and life-affirming as any other content anyone is likely to produce or present for years to come -- is certainly deserving of a superior publicity campaign, but nobody involved in its development could have imagined so spectacular a launch as the one Nat Geo put together -- a screening under the stars at the Hollywood Bowl for hundreds of VIPs and company clients and thousands of others, for a combined audience of almost 17,000.  The experience was enhanced by a full orchestra on the stage providing music for the film, which was scored by Phillip Glass, and the sounds of primates and other wildlife echoing throughout the Bowl and the dense wooded areas that surround it.

This outsize presentation in so cavernous an environment might have been overkill for many documentary productions or mainstream Hollywood movies.  But it felt entirely appropriate for Jane (the first documentary ever to have its premiere at the Bowl), which to judge by random reactions throughout the crowd touched each and every guest on a very personal level despite (or perhaps because of) the enormity of the event and the overwhelming appreciation of the lives of all creatures that pulses through every frame of the film.  This is especially true of the recently discovered archival footage from the ‘60s and ‘70s of Goodall at work studying wild animals -- in particular chimpanzees -- in their native environments, lovingly filmed by the late Hugo van Lawick, the man who would eventually become Goodall’s husband and the father of her son. 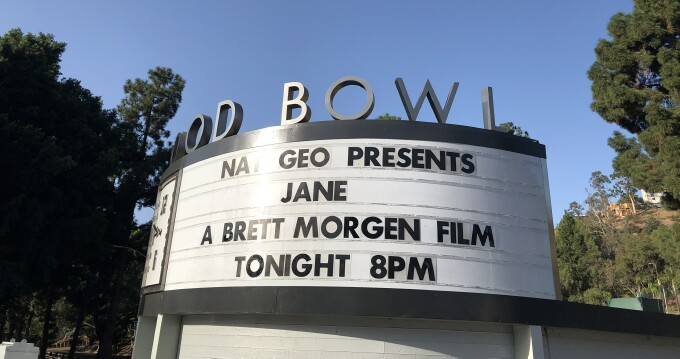 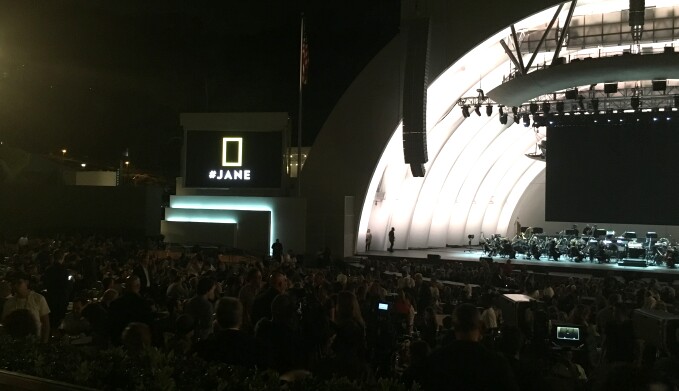 Most outstanding about Jane is the fact that Goodall -- at age 83 still working tirelessly to speak on behalf of animals and save the planet from the ravages of man -- is very much a part of the production, having been interviewed on camera for several days by the film’s multi-talented director, writer and producer, Brett Morgen.  Who better to talk about her life and times, all the work she has done and the work still to do than the woman herself?  How wonderful it was to see Goodall on stage at the start, introducing the film, and after it ended, receiving accolades from thousands of cheering fans.  (In the photo at bottom Goodall is holding a massive spray of flowers she was presented at the end of the evening.)  And how glorious it must have been for her to see the very old 16-mm footage lovingly shot by Lawick so many decades ago in such remote locales restored and projected in that world-famous venue.  (An aside: Much of the beauty of this film radiates from the warm but nevertheless vivid colors in the 16-mm footage, something that has been lost to the hyper-real clarity of digital technology.) 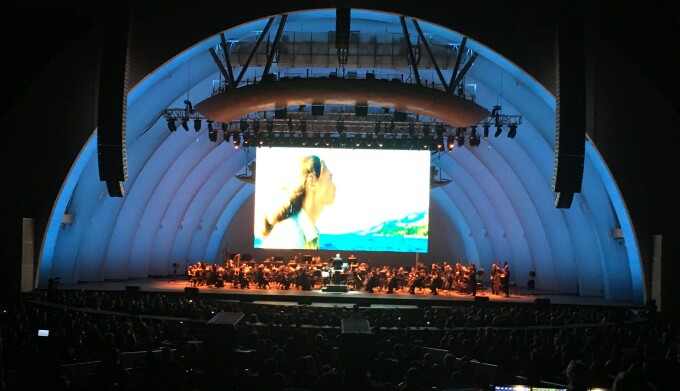 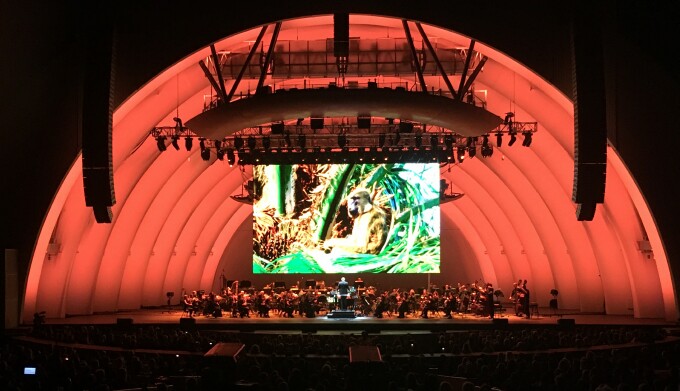 For one night at the Bowl an appreciative crowd of 17,000 people celebrated the extraordinary accomplishments of a woman who many decades ago did something no other woman had done despite all odds, and always with great dignity and compassion.  Morgen made it a point to repeatedly include in the film multiple images of newspaper coverage of Goodall’s early findings, much of it making light of the fact that the person doing such great work was female -- not surprising given that the news media was at the time run by powerful men of the period. 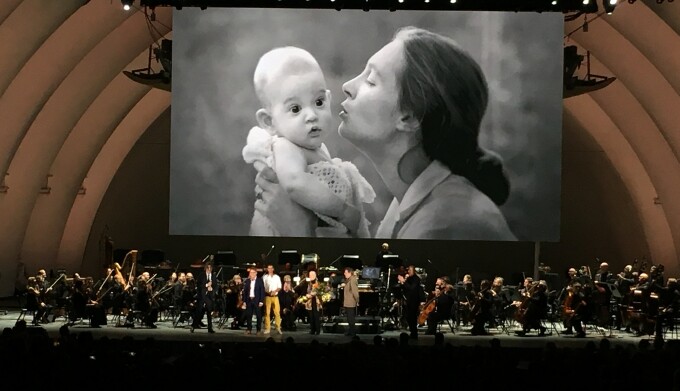 It was a night that won’t soon be forgotten for anyone who attended, and that includes the dozens of celebrities who turned out for the festivities, among them Angelina Jolie (pictured at top with Goodall, left, and National Geographic Global Networks CEO Courteney Monroe, right), Derek Hough (who shared with my colleague Jacqueline Cutler and me stories about the time he spent as a kid with his father’s massive collection of National Geographic magazines), Jamie Lee Curtis, Judd Apatow,  Esai Morales, Alicia Silverstone, Ed Begley Jr., Howie Mandel and many more.  There were many "big names" in attendance, but on Monday October 9, 2017 none of them seemed as monumental as Jane Goodall.  I believe they would all agree with that statement.