NBC at TCA: Diversity, Drama and the Donald 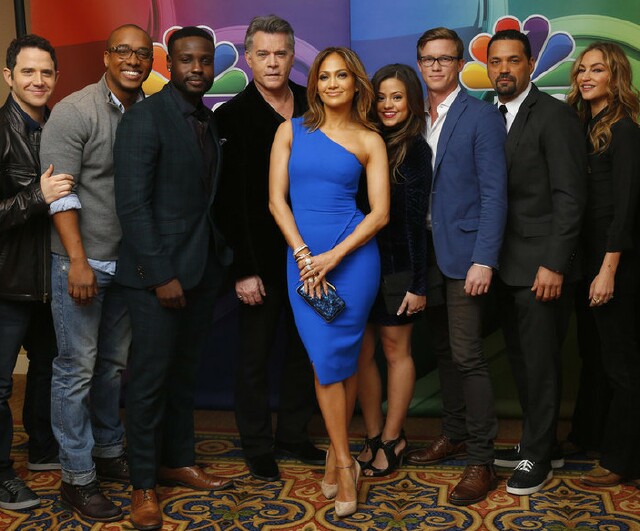 Pasadena, CA – NBC’s day at TCA yesterday largely put to rest concerns expressed throughout the broadcast portion of this tour about diversity issues in network programming. There were panels for the Jennifer Lopez cop drama “Shades of Blue,” the America Ferrera comedy “Superstore,” the Eva Longoria comedy “Telenovela” and the Jerrod Carmichael comedy “The Carmichael Show.” The panels for other NBC series, including the medical drama “Heartbeat” and super-producer Dick Wolf’s trilogy “Chicago Fire,” “Chicago PD” and “Chicago Med” also made clear that diversity is a priority at NBC. (Lopez and her castmates are pictured above.)

And then there was the cheerful greeting first thing in the morning form NBC Entertainment Chairman Bob Greenblatt who, with a nod to remarks made the day before by new CBS Entertainment President Glenn Geller, welcomed everyone to NBC’s sessions and said, “I was doing some math before I came here, and I think this is my 25th executive session of the TCA that I’ve been up at this podium, and I think there were 23 or 24 more where I was in the back of the room as a younger executive.

“So here I am again. I still come from Illinois, and I’m still gay.” 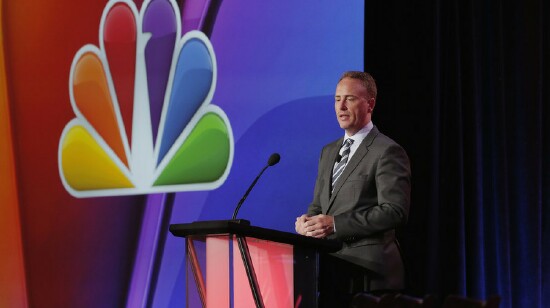 As always, Greenblatt (pictured above) came prepared to make news and/or confirm existing reports. “We’re looking forward to a strong midseason as well and a terrific summer,” he said. “We’ve got Simon Cowell joining ‘America’s Got Talent,’ plus our growing hit ‘American Ninja Warrior,’ and of course, we end the summer with the [Olympics] in Rio.”

Greenblatt was especially excited about NBC’s performance this fall. “‘Sunday Night Football’ the No. 1 show on television, just delivered the most-watched NFL primetime season in 19 years,” he said. “But I want to point out that when you factor out sports, we are No. 1 with entertainment programs only. I want to repeat that. NBC is No. 1 with entertainment programs only. That hasn’t happened for us since 2003, which included the final season of ‘Friends.’

“As I think all of you know, ‘Blindspot’ quickly became the No. 1 new series of the season in both total audience and most demos,” he continued. “It’s also the biggest gainer in L+7, adding an average of over 5 1/2 million viewers a week. That brings the show’s weekly average to about 13 million and has helped keep us dominant on Mondays [after “The Voice”].”

Greenblatt also raved about NBC’s December holiday specials. “‘The Wiz Live’ was a huge success for us, growing 42 percent over [last year’s live musical] ‘Peter Pan,’” he continued. “Excluding sports, it was our second-best Thursday -- behind ‘The Sound of Music’ -- since the ‘ER’ finale in 2009. Then a week later we aired ‘Dolly Parton’s Coat of Many Colors,’ a beautiful family movie that wasn’t afraid to talk about God and faith. This movie had nearly 16 million viewers within three days. It became the most-watched TV movie in more than six years. And finally, we had the sublime ‘Adele Live in New York City’ following a very big ‘Voice’ finale. It became the top rated music special on any network in 11 years.”

In December 2016, Greenblatt announced, NBC’s next live musical will be a production of “Hairspray,” pending any last-minute problems with deal-making.

Not surprisingly, the specter of Donald Trump continues to hang over NBC, something Greenblatt dealt with at the Summer 2015 TCA tour and again yesterday. Several critics were fuming over NBC’s decision two months ago to let Trump host “Saturday Night Live” after the network very publicly declared that, because of many things Trump had said about Mexicans and other groups since declaring his candidacy for President of the United States, it was out of business with him.

Greenblatt was plainly prepared for questions on this subject. “At the end of the day, he was on the show for 11 minutes,” he said of Trump’s “SNL” gig. “As I like to say, the Earth didn’t [spin] off its axis. It was a highly rated show, and that’s always a good thing. He’s the sort of front-runner for the Republican nomination. He’s everywhere.”

The press pressed on, taking NBC to task for saying it would cut ties with Trump but then featuring him on entertainment programs like “SNL” and “The Tonight Show.”

Greenblatt was concise. “What we said is we wanted to be out of business with him. We had a couple of businesses that we were doing with him, ‘Apprentice’ and the pageants. We got out of both of those businesses -- and that was July, when most of us thought he would be sort of waltzing into the background of the political arena. Lo and behold, he’s the front-runner, and the poll numbers are sort of astounding, and he’s everywhere. He’s on every news show, every morning show, every nightly show and every cable news show.

“We book thousands of guests on shows year-round,” Greenblatt continued. “He was actually on ‘SNL’ less time than he’s been on other shows on our network. He was on ‘Meet the Press’ this weekend for an hour. I don’t think the public is confused [about this] as much as the press and some special interest groups.”

What about equal time rules, another critic asked.

“It’s very regulated and specific, and a lot of lawyers know it more than I do,” Greenblatt replied. “If people request equal time and they’re eligible for it -- not everyone who is running is eligible for it -- then we negotiate with each candidate how they’re going to get that equal time. It’s not as cut and dried as ‘they get 11 minutes on ‘SNL’ also.’ In fact, we have given equal time to, I think, six of the candidates, and everything’s been satisfied. It’s in certain markets, it’s a certain number of minutes and it’s all been taken care of. It’s not as simple as giving them the same thing that [Trump] had.”