NBC at TCA -- “This Is Us,” “Biggest Loser” and Special Guest Star Amy Poehler as “Chip” 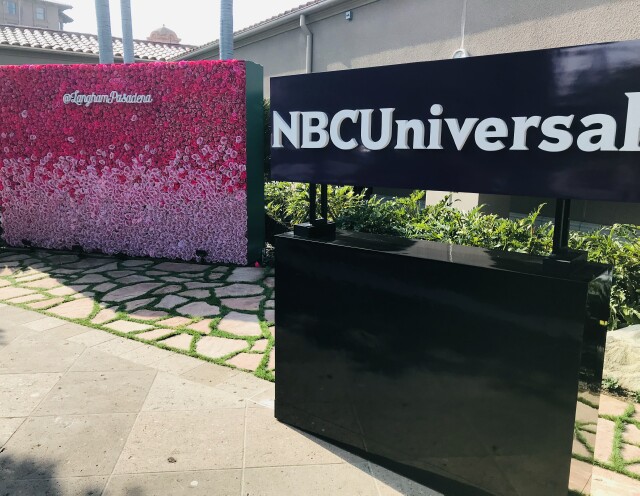 Pasadena, CA -- NBC had a great day at the Winter 2020 Television Critics Association tour, beginning with the kind of small but impactful surprise for which these tours used to be known; an unscheduled appearance by Amy Poehler, pretending to be executive vice president of publicity Chip Sullivan, welcoming everyone to the network’s presentation.  The day included a spirited session with NBC entertainment chairman Paul Telegdy; panels for the upcoming sitcoms Indebted (starring Fran Drescher, who also knows how to light up a press event) and Zoey’s Extraordinary Playlist; new dramas Council of Dads and Lincoln Rhyme: Hunt for the Bone Collector, and return sci-fi thriller Manifest.  There were also panels for Syfy’s upcoming Resident Alien and USA Network’s new drama Briarpatch and rebooted reality series The Biggest Loser.  (The latter caused a bit of a dust up, as you'll see below.)  But the biggest draw of the day, as has been the case for three years, was a panel for the acclaimed drama This Is Us, which tends to overshadow everything else because if its sustained quality and popularity.  That’s a good problem to have.  And the fact that NBC continues to include panels for the show in TCA tours speaks to its understanding of what journalists and critics want from these twice-yearly events.

After the panel we caught up with Chris Sullivan (no relation to the aforementioned Chip), who plays Kate’s husband Toby and is arguably the unsung hero of the show, after the panel.  While each character has over the last three seasons been navigating his or her own personal journey and often spiraling downwards, in recent episodes viewers have had the pleasure of seeing Toby achieve major success concerning his weight loss.  It’s a storyline that began in the show’s freshman year and culminated this season, when the character (and actor) proudly revealed a trimmed-down physique as a result of discovering cross-fit exercise as a means to relieve the stresses consuming his life.  For Chris (pictured below), who stands 6’5” and currently weighs in at 260lbs, it’s a dramatic change from the 290lbs he started the show at, as was taking off his shirt recently for Toby’s big reveal. 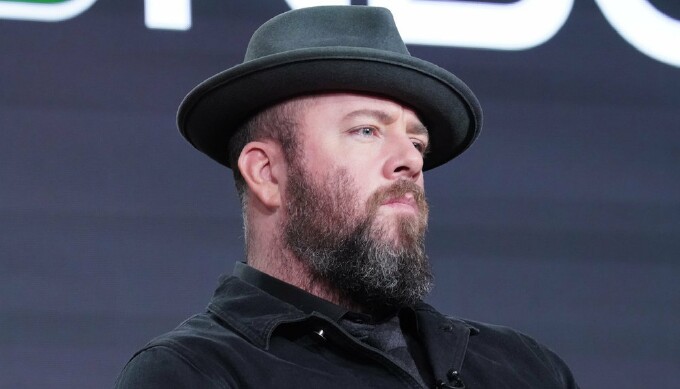 “The idea I would be taking my shirt off on television wasn’t something I was necessarily preparing myself for,” he laughed when MediaVillage spoke with him after the panel.  “I never thought I would be the one, but you’ve seen all the men on the show topless and I’m now part of the club.

“I’ve been involved in yoga for many years,” he continued, noting that his move from Chicago to Los Angeles to be a part of Us was the star tof a healthier lifestyle.  “After losing the weight, emotionally, mentally and physically I’m clearer than I’ve ever been. So, getting those priorities in order has for me been life changing.

“Certain people aren’t aware that I started the show wearing a prosthetic costume, so they may have perceived the weight loss as something bigger than it is,” he continued.  “I’ve also been doing my own personal work and the reaction [to Toby’s transformation] has been really good.” 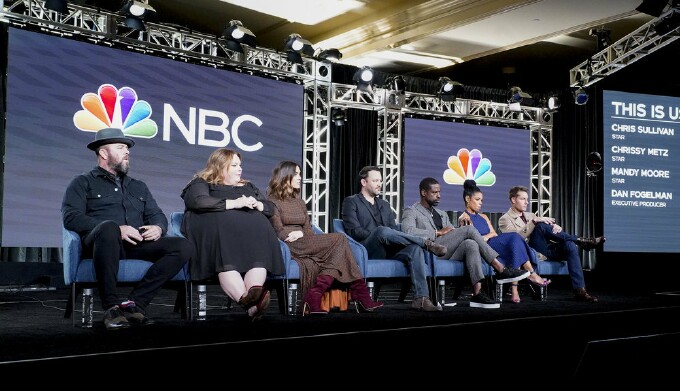 Chris credits the Us writers’ room, along with series creator Dan Fogelman, for having the foresight to be three seasons ahead concerning the series’ storylines as a major part of the show’s success, along with their ability to tailor storylines to suit the actors and what’s happening in their own lives.  “They’re very considerate of our personal lives,” he explained.  “If I want to lose weight, they’ll work around it.  [Dan] gave us options.  He said, ‘If you lose weight, or the opposite, we have ideas should either take place.’  The planning, and that writers’ room, is what makes the show so intentional and makes the audience feel like they are being taken care of.  They’re not making it up as they go.  The story has been planned very carefully for seasons in advance.”

With NBC having greenlit an additional three seasons of the series (including this current fourth), This Is Us will have plenty of time to tell more of those heart-wrenching stories its acclaimed for, along with providing job security for its cast and crew.  “Everybody loves job security,” laughed Chris.  “[After we got the pick-up] the mood on set was something like a certain amount of relief that we didn’t know we needed.  It’s nice to know we’re going to get to complete the story.  We started it, and it’s nice to know we are going to get to finish it.  I think that’s also exciting for the audience.

“There are some really serious times for Kate and Toby as they navigate new dynamics, like Toby on his fitness track, being new parents, and being the parents of a child with a disability.  There are a lot of shifting dynamics for the rest of the season that are going to be very tricky.”

And should he ever be required to bulk up again for the flashback and flashforward scenes that are so much a part of This Is Us, Chris has that covered, too.  “Obviously the show travels back and forth in time, and there may be a call to look back at that time,” he shared.  “So, we haven’t burned [the prosthetic suit] in effigy as yet.  We’ll always have the prosthetics to go back to.”

In closing he also answered the burning question on everyone’s mind: With This Is Us, being a weekly sob-fest, has he bought shares in Kleenex?   “Oh, we all bought stocks in Kleenex a long time ago,” he joked.  “Now we’re all making more money from Kleenex than we’re making from the show.”

Interestingly, there was much more talk about weight loss later in the day during USA Network’s panel for the upcoming reboot of The Biggest Loser.  The back and forth between panelists and the press wasn’t nearly as pleasant and supportive as it had been during This Is Us, with journalists of all shapes, sizes and genders expressing concern (and in some cases outrage) at the way Loser used to treat people of size (beginning with the title), and recalling problems that overweight participants endured after being eliminated from the show.  Of course, social media hadn’t yet exploded when Loser was telecast on NBC; now, it is a robust platform for people to take a stand against body-shaming.  That has worked very much in favor for This Is Us and the story of Kate and Toby’s relationship and their mutual struggles with weight, but it may prove to be an insurmountable issue for The Biggest Loser.

After the Loser panel we spoke about this with the ferociously fit Bob Harper, who was a trainer on the original NBC series and is the host of the USA reboot.  He acknowledged the issues surrounding the show and said they have been addressed.  "Hopefully the changes made to this revamped version of the show will alleviate some of those concerns," he said.  “We’ve taken away things like the temptation food challenges to concentrate on storytelling and the contestants' goals.  This isn’t the Biggest Loser people are familiar with.”

This Is Usis telecast Tuesdays at 9 p.m. on NBC.