NBC at TCA: “Will & Grace” Had Everyone Talking 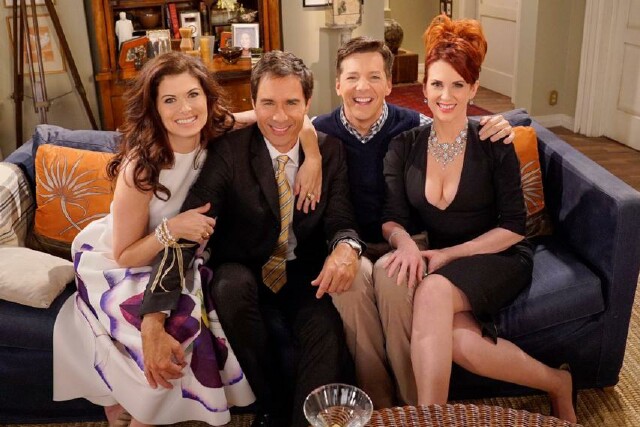 Pasadena, CA – At Television Critics Association tours there is something about a broadcast network day without a broadcast executive press conference.  It just doesn’t fully come together the way it should.  At this tour, the top programmers at CBS, ABC and NBC stayed off stage. At least NBC Entertainment President Jennifer Salke opened and frequently appeared on stage during her network's day Wednesday at the Winter 2017 tour -- and even though she wasn't there to take any questions, she did make some of the biggest broadcast announcements of the tour, as detailed below.

Overall NBC gave the TCA a very satisfying day filled with a roster of stars and shows that kept critics and reporters interested even on the 14th (and final) day of what had been a very full tour that included approximately 125 press conferences plus other activities. NBC's talent included Jennifer Lopez, Tina Fey, John Lithgow, Vanessa Hudgens, the cast of super hit This Is Us and NBC legend Dick Wolf, the executive producer of the network’s many Law & Order series over the last 27 years, as well as the four shows in its current Chicago franchise.

Salke took the stage at the start of the day to make an announcement everyone knew was coming but was nevertheless happy to hear: The entire cast and crew of the now-classic sitcom Will & Grace was reuniting for a new 10-episode season of the show -- not on a streamer or a cable network, but back on NBC where it ran from 1998-2006.  That means Eric McCormack, Debra Messing, Sean Hayes and Megan Mullally will be in the 2017-18 broadcast season and once again be among the Peacock's biggest stars. (Messing, McCormack, Hayes and Mullally are pictured at top.)

Rumors of a Will & Grace resurrection -- possibly for streaming services Hulu or Netflix – have been swirling ever since the cast got together for a lively pre-election short late last year; one brimming with topical and biting Donald Trump commentary. (You can watch it below.)

Along with the cast, original series creators Max Mutchnick and David Kohan are on board as showrunners and executive producers. Veteran sitcom director James Burrows, often considered the fifth member of the ensemble, will be back behind the lens and will serve as an executive producer on the project.

All of this enthusiasm is a far cry from 2013, when our own Steve Gidlow quizzed both McCormack and Messing, who were together at a Paley Center event celebrating Burrows’ career, on the possibility of some kind of reunion.  Let’s just say that at that time they were happy to let sleeping dogs snooze.

“It still feels so alive,” admitted Messing, acknowledging the show’s popularity in syndication.

“It really does,” McCormack agreed. “The way we finished it, and the way the finale went was so great. It went into the future showing us as older people, so I’d hate to mess with that too much,” he added.

What form the new series will take remains to be seen, but back in 2013 McCormack did entertain the idea of a Will & Grace: The Early Years-type show if they were ever to revisit it. “We’ll do the prequel,” he laughed.

In addition to the original leads retuning there’s one other cast member who’s happily on board should an invitation be extended -- Michael Angarano, who played Jack’s son Elliot.

“I haven’t heard anything yet, but I would be more than open to it,” he enthused when Steve recently asked him about it during a TCA event for Showtime’s upcoming scripted series about stand-up comicsI’m Dying Up Here, in which he will co-star.  “It was such a formative experience in my life, and getting that group together again is a fantastic thing.”

Once the excitement about Will & Grace died down, Dick Wolf and cast members from Chicago Justice, the upcoming fourth series in his Windy City franchise, took the stage to talk about their show.  It will be launched during a special three-hour block of Chicago shows on March 1 comprised of Chicago Fire, Chicago P.D. and Chicago Justice, with characters from Chicago Med appearing in all three hours.

“Crossovers are a pain in the ass,” the always candid Wolf declared. “Everybody hates doing them.  But the results have been manifest now for the last four seasons.  I don’t have exact numbers, but usually the highs for many of the shows have been during crossovers.  Unfortunately, it’s like ratings crack, and it’s a bad addiction because you don’t want to overuse it.  But the premiere event on March 1st has never been done before.

“It’s really amazing,” he continued. “It’s incredibly hard to pull off, but to be able to do something after, whatever it is, 75 years of commercial television that has literally never been done before is exciting, and it gives the actors, as they stumble out in 13 degree weather at 6:30 in the morning, a reason to get out there.”

Following the special premiere event Chicago Justice will debut in its regular time slot on Sunday, March 5 at 9 p.m.

There was more big news during NBC’s day at TCA – Salke opened the session for the network’s breakout hit This Is Us by announcing that it has been renewed for two 18-episode seasons.

“The show means everything to us,” Salke said. “We’re so appreciative of the artistry and talent, both in front of and behind the camera. They’ve made us all extremely proud.”

Steve Gidlow contributed to this report.

Be sure to read about the cultural influence of "Will & Grace" in Jack Myers' book The Future of Men.