NBC's Greenblatt at TCA: "We Need to Redefine What 'Broadcaster' Means" 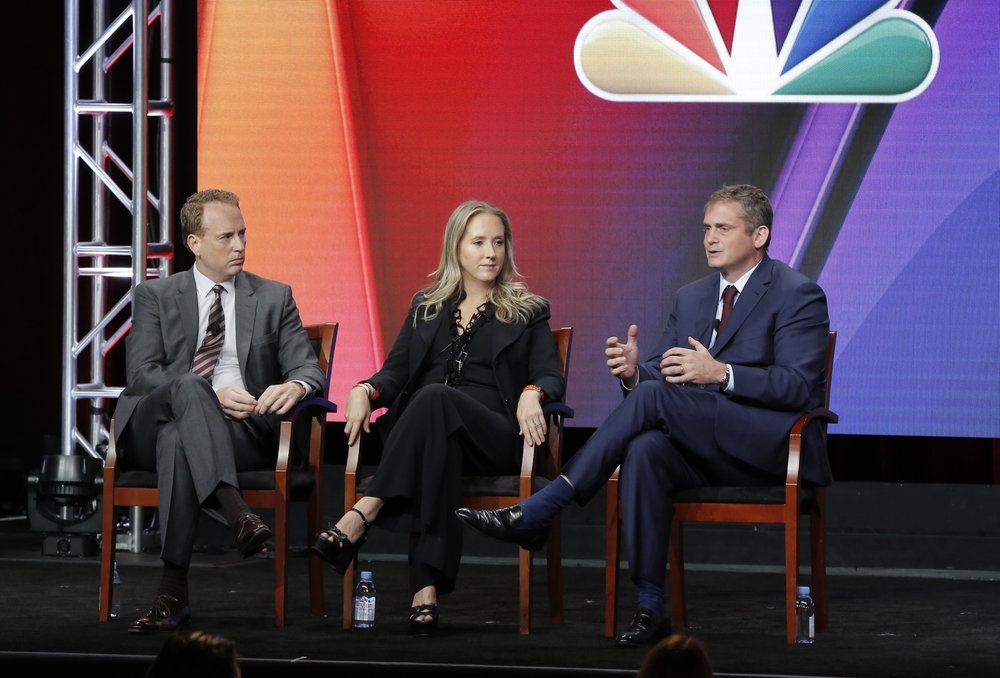 Beverly Hills, CA – NBC put together a terrific day at the Summer 2017 Television Critics Association tour, with perhaps the most popular series of panels from any network so far.   They included sessions with the casts of the returning Will & Grace and the game-changing family drama This Is Us, as well as the upcoming limited series Law & Order True Crime: The Menendez Murders and the new drama series The Brave.  Steve Harvey was here to talk about his new daytime talk and entertainment show Steve.   Apolo Ohno and Mike Tirico were on hand to discuss NBCU’s coverage of the 2018 Winter Olympic Games.

But NBC’s portion of the tour began the way every broadcaster’s time at TCA should, with an upbeat, newsworthy executive session that set the tone for the day to come.  NBC Entertainment Chairman Bob Greenblatt, joined by NBC Entertainment President Jennifer Salke and Alternative and Reality Group President Paul Telegdy, opened with remarks that supported not only the strength of his own network but that of broadcast overall. (Greenblatt, Salke and Telegdy are pictured at top, left to right.)

It was no surprise that This Is Us was top of mind.  “This kind of game changer just doesn’t come along very often,” Greenblatt said of the show, thanking series creator Dan Fogelman and the cast (pictured below).  “Not only was it the No. 1 new series in the [18-49] demo, but it now currently ranks as the No. 5 entertainment show in total viewers on all of television, broadcasting or cable.

“Here are a couple more eye-opening statistics,” he continued.  “Through mid-July, This Is Us is averaging 26 million viewers per episode, and the pilot alone has been seen by 32 million people." 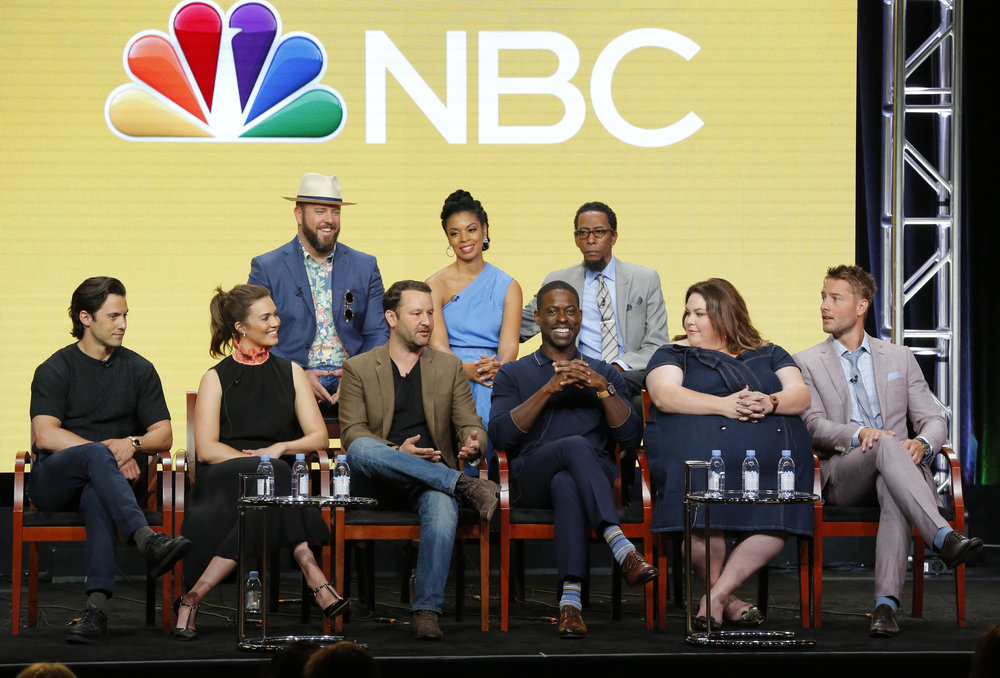 The good news didn't end there.  Greenblatt said Saturday Night Live "just had its most-watched season in 23 years with an average of 11 million viewers per episode, which is up 36% versus the prior season on the Live+7 measurement.”  America's Got Talent, currently in its 12th season, is enjoying its highest rated season ever.

NBC has the Super Bowl and the Olympics in February, which Greenblatt believes will make the network No. 1 in both the 18-49 demo and in total viewers next year, something NBC hasn’t accomplished since 2002.  “I know sports will play a big part in that, but I’m optimistic we will also hold our 18-49 lead even when sports are factored out,” he said.

“All of this makes me very bullish about our future and the future of broadcasting in general,” Greenblatt declared.  “While we know that linear viewing is declining, delayed viewing and digital are not only keeping the broadcast business afloat, but actually going pretty strong.  I know the general consensus for a while has been that the broadcast networks are aging dinosaurs just getting closer to extinction.  I’m happy to say NBC is very much alive and well today, and I’d love to change that narrative a little.  In fact, in our core demo, more people watched our original programming this year than they did last year, and that’s without a Super Bowl or an Olympics to inflate the comparison.

“Furthermore, if you look back seven years -- which, by the way, is the year the iPad came on the market and Netflix started offering a standalone streaming service -- our entertainment programming is actually up 12% since then!” he continued.  “My point is that I don’t think the broadcasting narrative should be linear versus digital anymore, but rather linear plus digital.  I think it’s a great time to be a broadcaster, but we also need to redefine what ‘broadcaster’ fundamentally means.

“A whole new business model is evolving for us, which is being driven by new technology and the will of the viewer. Our goal isn’t to just attract the most eyeballs to the network anymore, but to bring content to audiences wherever and whenever they want to watch it.  Each platform reaches a different audience, and we want to get as many of them into the tent as possible.”

Greenblatt gave credit to the many new platforms out there for NBC’s increased strength among younger demographics.  “We’re now reaching more young people because viewers on digital and over the top platforms are 20 years younger on average for us than those watching the network,” he said.  “And with the new digital MVPDs coming online, like YouTube and Sling, we might even see some of these younger people tuning into the live feed, as well.

“We’re also monetizing virtually all of these platforms,” he later added.  “It’s not a coincidence that NBC Entertainment just had its most profitable year in 17 years, and we just wrapped up our best Upfront in eight years.”

Greenblatt noted that the total audience for a program beyond Live+ Same Day, Live+3 and Live+7 is more important than ever.  “Today everything else matters and the long tail can be quite dramatic,” he said.  “Broadcast shows have a starting line, but they seem to have almost no discernible finish line.”

He talked about the true 18-49 ratings of several NBC series, starting, of course, with the pilot of This Is Us.  Its Live+ Same Day rating was "a very healthy" 2.8 when it was first telecast last September, he recalled.  With Live+3 added across all platforms that rating increased to 4.6.  The Live+7 numbers brought it to 5.6.  Add days 8 through 35, and then go beyond day 35, and after 10 months “the pilot episode stands at a whopping 13 rating,” he said.

The last time a single episode of a scripted series had anywhere near a 13 rating was 23 years ago when NBC telecast the pilot of ER on Sept. 19, 1994, which scored a 12 rating.  “It’s not apples to apples,” Greenblatt admitted.  “They got it all in one night.  But the fact remains that if you look at our business holistically, This Is Us on broadcast television is still capable of reaching a massive audience.”

Greenblatt cited several more examples of show ratings growing significantly over time, including those for Saturday Night Live.  Its Season 42 premiere had a Live+ Same Day rating of 2.3.  With delayed viewing numbers added the rating rose to a 5.3.

“The world has changed, the audience has changed, and our business model is changing,” he told the critics.  “I could use your help getting the word out -- or at least giving broadcast television the benefit of the doubt.”