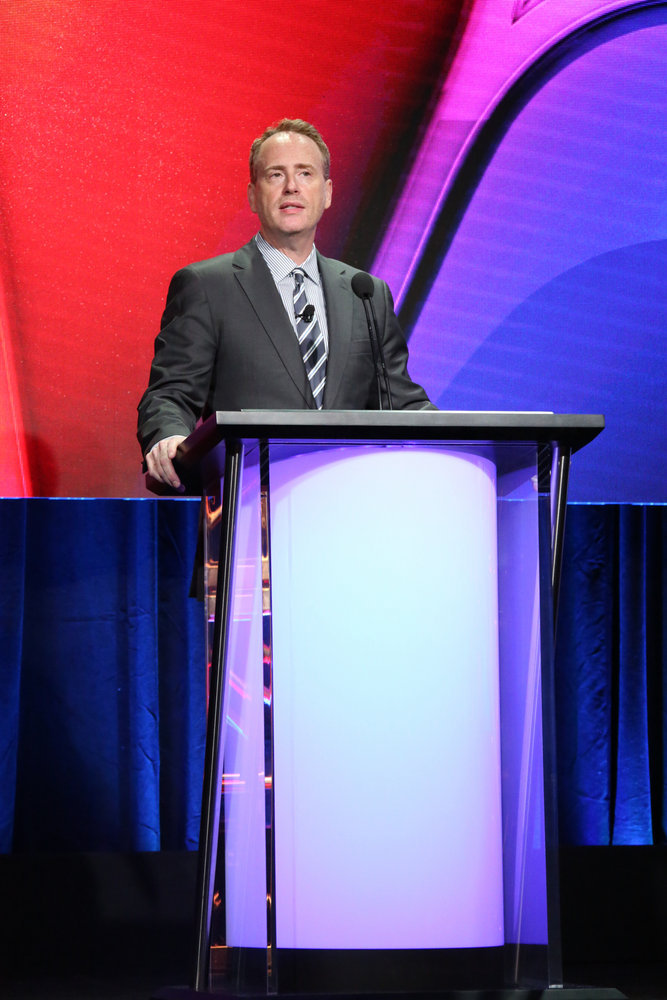 Beverly Hills, CA – Does the fall season really matter anymore, or should we all finally look at broadcast television as a 52-week-a-year business?  That’s a fair takeaway question after NBC’s day at the Summer 2016 Television Critics Association tour, which was very much about the network’s year-round success.

Yes, NBC did present panels for three new fall shows: The comedy The Good Place with Kristin Bell and Ted Danson, the science-fiction adventure Time Will Tell and the family drama This Is Us, the latter benefitting from a hugely popular trailer -- viewed 91 million times across social media according to NBC Entertainment Chairman Bob Greenblatt (pictured at top and at bottom left). The network also included a panel for its successful sophomore thriller Blindspot, which launched last fall. But much of the talk during Greenblatt’s opening remarks concerned recent midseason and spring successes for NBC including Superstore, Shades of Blue, The Carmichael Show and Little Big Shots; the December 2015 movie Coat of Many Colors (which will have a sequel); the live holiday season musical Hairspray, and another planned December special celebrating Tony Bennett’s 90th birthday. (For the first time since it began producing live December musicals, NBC yesterday brought the cast of one to the Summer TCA. With Kristin Chenoweth, Harvey Fierstein, Jennifer Hudson, Derek Hough and Ariana Grande on stage, the Hairspray panel, pictured below, was a highlight of the day.) 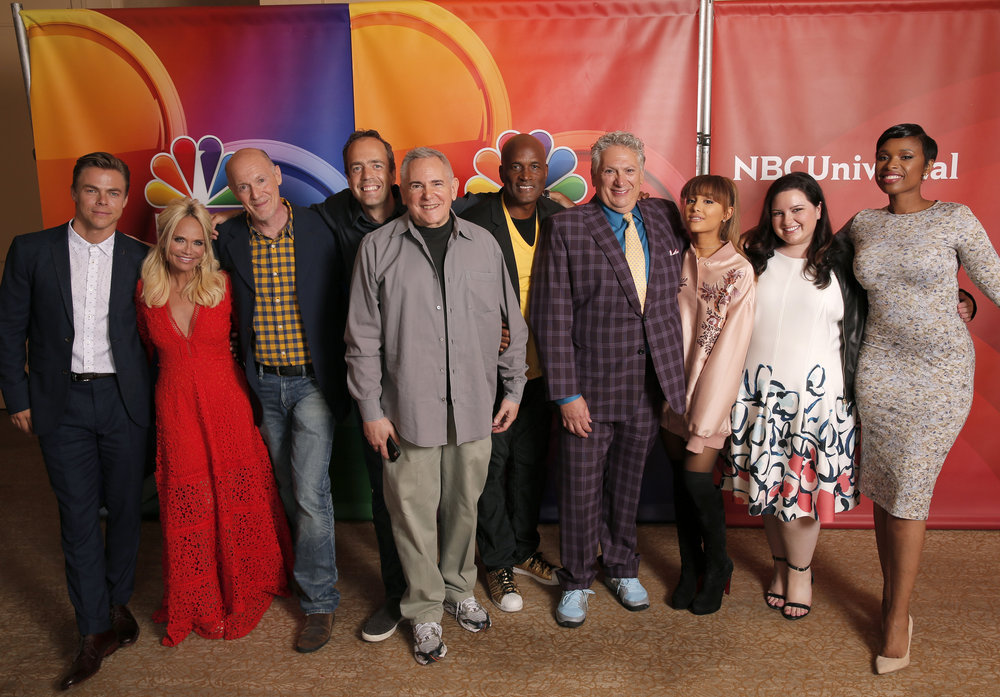 Greenblatt also had a lot to say about summer hits America’s Got Talent (currently enjoying its highest ratings in five years) and American Ninja Warrior as well as Chicago Justice, the fourth entry in Dick Wolf’s high-profile, ever-expanding Windy City franchise, which will launch at midseason rather than in the fall. (Wolf, who appeared yesterday to promote the returning Chicago Med, continues to collectively define his Chicago shows as one large multi-faceted series and all of his actors as one large cast. It’s an interesting idea and a new way of approaching series drama on broadcast television.)

“Our fall schedule is crowded with shows that were working for us; a lot of returning shows,” NBC Entertainment President Jennifer Salke (pictured below right), who appeared with Greenblatt, told the TCA. “There were moments where [Chicago Justice] was on the fall schedule. It ended up in the place we think is the best spot for it. We’re not looking at midseason as any kind of booby prize on the schedule board. It’s a place of great opportunity.” 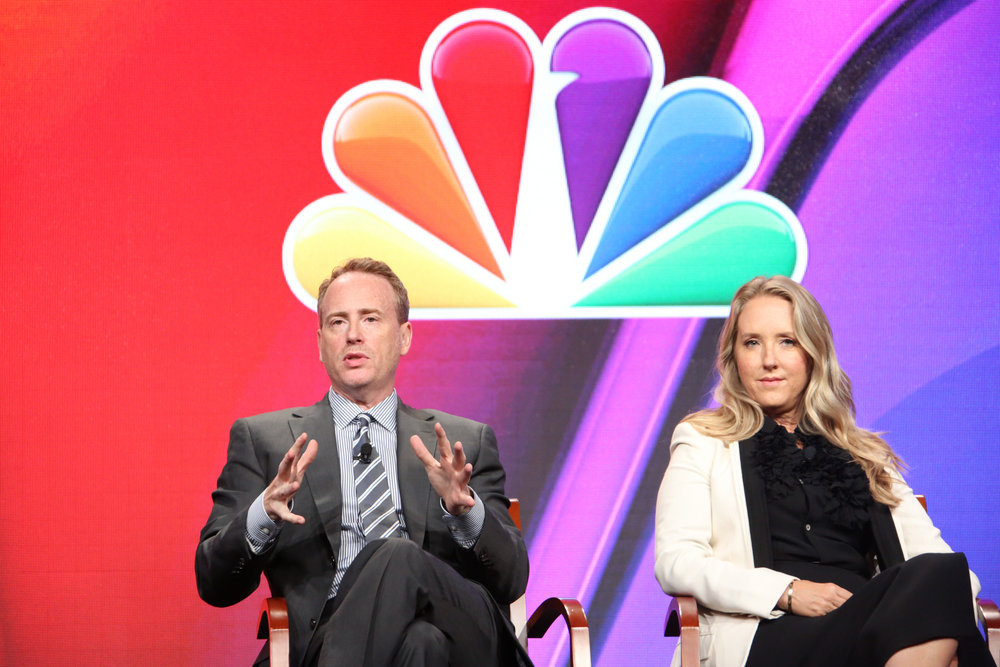 The growing Chicago franchise, the year-round debuts of series, its summer successes and its outstanding holiday programming – not to mention Sunday Night Football and coverage of the Summer and Winter Olympic Games -- have made the last few years some of the best for NBC in recent memory. “I’d like to make the case that NBC has defied a lot of the doom and gloom and downward trends we’ve been hearing about network television for the past few years,” Greenblatt said. “In fact, we’re thriving in an era of unprecedented change, and our slate of entertainment programs has actually generated ratings gains for the last three years in a row.

“Looking back six years, which is about the time Comcast and most of us arrived, our entertainment programs are actually up in viewers -- up substantially, 17%, in fact,” Greenblatt continued. “I’m pleased to note that NBC has also just hit an eight-year high in total viewers, which is the best since this point in the 2007 season. I remember at the time Comcast bought the company, most people thought there was no way to turn around a broadcast network, one of those dying dinosaurs. In fact, why even bother? But [NBCUniversal CEO] Steve Burke and I didn’t agree, and we knew it wouldn’t happen overnight, but that it was absolutely possible with a lot of hard work, a lot of investment and, of course, a lot of luck. So in those past few years, we’ve made enormous investments in sports rights and license fees for all kinds of programming.

“Of course, network television is a day-to-day fight on every front, but I hope the takeaway is that we believe in it,” he added. “It’s still the best medium to start a national conversation and reach a mass audience, and I think we’ve made a lot of headway. Now, I know that might not be the greatest headline ever, but that’s my story and I’m sticking to it.

“I think the longer we stay strong and aggressive, the better that we’ll do in this very, very competitive landscape,” he concluded. “But, you know, for 25 years now, there’s been a lot of competition. It started with cable and pay cable and all the things that cable could do that broadcast can’t do. And I think the producers and writers are getting more sophisticated about what is really good for those services versus what’s still great for the broadcast venue. We have no shortage of great people that want to be on a medium that can actually reach many, many people at any given time.”