NBC's "Superstore" Season Finale Will Blow You Away 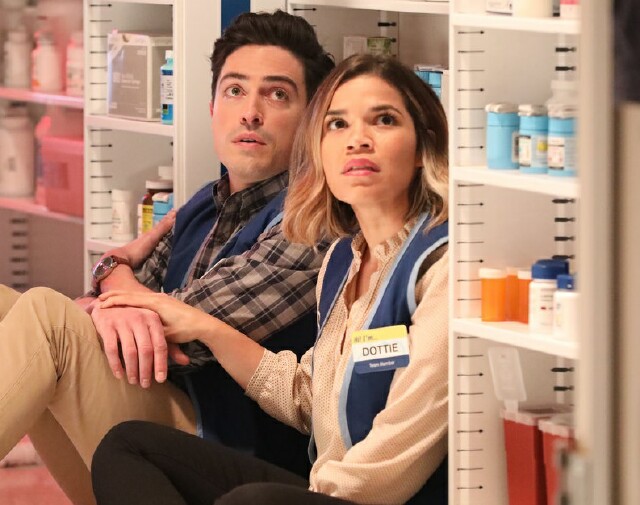 NBC’sSuperstore isn’t just another workplace comedy. Creator Justin Spitzer found the last remaining piece of interesting real estate in this sitcom sub-genre and firmly planted the flag of fictional big-box Cloud 9 right in the center of it. This slice-of-life comedy features an age and culturally diverse cast full of entertaining characters that each bring their own thing to the table. Besides that, it has created and repeatedly followed a narrative thread of focusing on stories of personal relationships that are enhanced by exciting high notes of major events. Besides the Olympics-themed store fire, the helicopter, the black out, Cheyenne (Nichole Bloom) giving birth and the episode in which Marcus (Jon Barinholtz) cut his thumb off, the most recent event has been Cheyenne and Bo’s wedding – during which Store Manager Glenn (Mark McKinney) dropped the bomb that he has to fire six employees. In tonight’s season finale they have something even worse to worry about. Three guesses from the episode’s title: Tornado.

It has become apparent to me that the writers have in recent weeks been hinting at the coming of this potentially catastrophic weather event. During a previous episode, Amy (America Ferrera) said that people should “head to the eye of the storm” in the event of a tornado, incorrect advice that she blurts out again during this episode. In another, Glenn mentions the store got an “F” in tornado preparedness and that the building inspector called Cloud 9 “a house of cards.”

In the beginning of tonight’s episode a random customer looking at a flat-screen TV display flips through several severe weather and tornado warnings until he finds a shopping channel which, of course, he stops on and smiles.

A unique aspect of this show is its focus on the underrated and underpaid “normals” of the world. The entire floor staff of Cloud 9 is minimum wage and each represents a certain demographic. Just as in any real-life box store, they consist of the young, old, gay, straight, Asian, black, Latino, white and almost everyone in between.  Average people have always been fascinated with the lives of the wealthy but, as evidenced by some of the weirder reality shows optioned in recent years, they lately seem to be even more interested in lives that reflect their own.  It’s nice to see people who most of us come in contact with in our everyday lives finally get some representation on mainstream television. As fond as I am of doctors, forensic investigators and insanely rich housewives, I love “normal” more.

I could go on and on about how amazing the characters in this show are, and actually, I will for a little bit.  Glenn is both perpetually optimistic and hilariously naïve, even though besides maybe Myrtle (Linda Porter) and the ever-silent Brett (Jon Miyahara) he’s the eldest Cloud 9 employee present.  Garret (Colton Dunn) is the store’s announcement reader, cool-meter and resident smart aleck. Dina (Lauren Ash) is the over-bearing Assistant Manager who’s brand of unfiltered judgment and air of superiority I’ve come to love.  Her demeanor is almost Sheldon Cooper-like, and in a similar fashion she shows an increasing amount of humanity, however small those moments may be.

The spotlight firmly rests on Amy, Jonah (Ben Feldman) and Cheyenne for the most part.  Like most shows of this nature, various episodes focus on various characters but, besides Dina and Glenn, these three get the lion’s share of the limelight.  Amy and Jonah share a certain chemistry that for two seasons has alluded to the possibility of romance, even though said romance is forbidden due to the fact that Amy’s married (though the longevity of her marriage is constantly in question). Cheyenne and her wannabe rapper-husband Bo (Johnny Pemberton) represent the Millennial generation, and as the unofficial ambassadors of the participation trophy receiving, social media-obsessed young adults of today they have some of the funniest, most misguided dialogue in the whole show.

Amy is actually one of my favorites. America Ferrera (pictured at top with Feldman) is great as the levelheaded but not totally un-fun supervisor who’s got a knack for being both authoritative and occasionally awkward. She’s the straight man in a lot of the humor, and whenever she’s not, she’s kickin’ it buddy-style with Jonah (their relationship, both professional and personal, is an entertaining and obvious focal point of the series).

Elias (Danny Gura), Sandra (Kaliko Kauahi) and Mateo (Nico Santos) are also integral pieces of the puzzle that is Cloud 9’s colorful staff.  Their collective banter, reactions and various dynamics are always relatable, and they shine alongside the cutaways of painfully average customers doing hilariously average things in the store that are sprinkled throughout every episode. 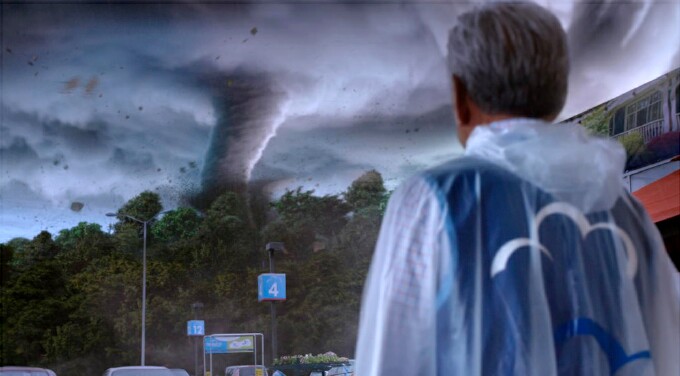 Season 1 ended with the “careers” of every Cloud 9 employee hanging in the balance due to an Amy and Jonah-organized walk out in protest of Glenn being fired.  Tonight their lives may literally hang in the balance seeing as tornados aren’t generally known for their gentle nature. Considering the hints we’ve already been given, I think it’s safe to say that the Cloud 9 set (which is an actual 22,500 square feet and set up to be filmed in without any special lighting) will be put through its paces during this season finale episode.  (Also, the photos above and below, taken from NBCUniversal's press site, suggest the worst.) 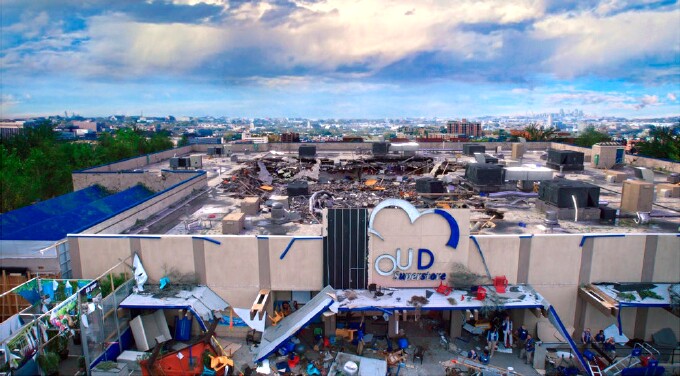 As with any good ending, questions will be asked, things will be confronted, and loose ends will be tied. NBC’s Superstorewill definitely shake things up with this one, both in the fictional big box store it’s centered on and the lives of the amazing “normals” who work there.