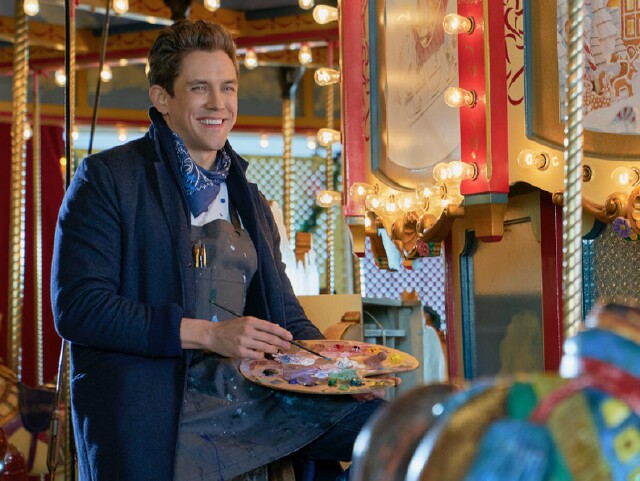 It's been three years, but Neal Bledsoe finally makes a welcome return to Hallmark Channel this weekend with the premiere of A Christmas Carousel, co-starring Rachel Boston. Bledsoe last graced Hallmark opposite Danica McKellar in the holiday favorite Coming Home For Christmas, and while he may seem like a Hallmark regular, this is only his second movie for the network. "I guess because the first was Coming Home for Christmas, it made it seem like it was a sequel and I had already come home for that," he laughed during an exclusive MediaVillage interview. "But to be coming back for Christmas is really wonderful. I was really tickled [Hallmark] asked me back.

"Since doing Coming Home I've stayed really good friends with Danica," Bledsoe (pictured at top) continued. "So, if I wasn't in Hallmark's solar system, I was always in their asteroid belt. Last year I attended the premiere of Danica's Christmas at Dollywood and had such a lovely time chatting with Niall Matter. When this popped up, I read the script, saw who I was playing, and started imagining the fun I was going to have. I was like, 'This is fantastic, I'll do it for free!' But my agent said, 'Don't say that! We are trying to negotiate a deal.'" 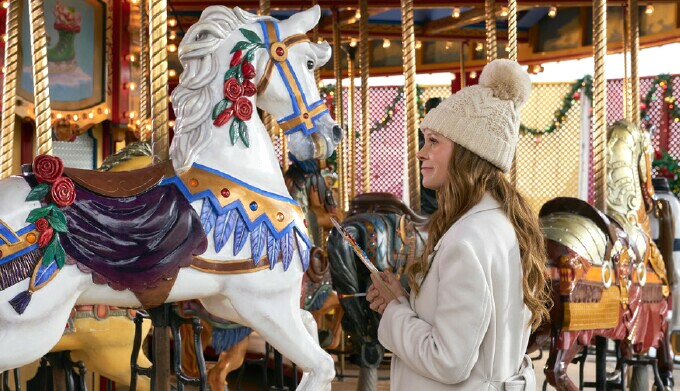 Part of the fun for Bledsoe was getting to play a passionate prince named Whitaker, heir to the throne of Ancadia, whose family hires famed restoration experts Lila (Boston, pictured above) and her father Roy (Stuart Hughes) to restore the royal family's beloved carousel. While her first impressions of Whit aren't the best, through working together artist Lila discovers his passion for the arts and two form a connection. However, with Whit spoken for as a part of his royal family obligations, and Lila ready to interview for her dream job in America, chances of a union are unlikely, unless one of them can make a wish upon the carousel's magical wishing horse.

While Bledsoe has played princes in the past, for this role he turned to a famous actor for inspiration. "I saw him as this Hugh Grant character," he revealed. "He had that rouge-ish charm and a bit of arrested development because of who he was. Hugh seems to play characters that we reach for to grow up, and Prince Whittaker very much seems like somebody like that. But there's another side I deeply identified with, and I think a lot of people can, which is this idea of do I choose a life that everybody tells me I should as my duty? Or do I do the things I want to do? I've chased that in my life, and I related to that.

"Knowing how much the arts became a salvation for me at a young age, and what a powerful effect they had in finding my voice, that message in the film became deeply personal," he added. "There's a scene where I give a speech about finding yourself in the arts; it was cut a little, but I really fought for a lot of the original [dialogue] because it was so personal to me, and why Whit starting an art school was so important to him."

Bledsoe admitted that he also saw comparisons to the story of Prince Harry and Meghan, Duchess of Sussex in the film, admitting, "I'm not the biggest royal fanatic, but I see [royalty] kind of as a secondary job. In [this] story, like the story of Meghan, there is that idea of, do I accept the path of tradition or forge my own way? In that sense that's something this film does very elegantly. You have to find a path, and I think that's what Harry and Meghan have found. It's the story of somebody who comes from outside of royal social circles to become such a compliment and an added plus to a family."

Besides getting to work with Boston, with whom he bonded while quarantining, Bledsoe enjoyed the challenge of using a consistent British accent. "I kept it going on set all the time as I really wanted to fool as much of the crew as possible" he joked. "The only time it got really challenging was doing night shoots when it got really cold. The muscles in my jaw would start to freeze up, and I literally was unable to make the sound. It started sounding like I was on quite a few horse tranquilizers. But I'll let you in on a little secret, I had to do a lot of it in post-production and I was like, 'What is this accent I'm doing?" 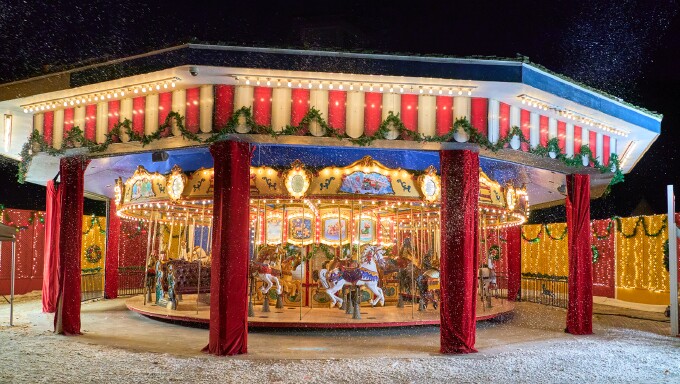 When it came to his other co-star, the majestic carousel at the film's center, Bledsoe had some interesting things to say. "The carousel could be very difficult to work with," he laughed. "It mostly came in drunk. I'm kidding! It was gorgeous! We made it our own Ancadian carousel by adding some Christmas paintings, but it's a real community carousel in North Bay, Ontario. Seeing it on camera is the perfect place to see it.

"I really hope people fall in love with the fairy tale aspect of the movie," he added in closing. "These movies mean so much to people who love them, and they have such a wide and deep fanbase that transcends gender, race and socioeconomics. People truly love these films, so to be invited into somebody's inner sanctum and give them a little joy at Christmas is pretty special."

A Christmas Carousel will be telecast Saturday, December 19 at 8 p.m. on Hallmark Channel as a part of its annual Countdown to Christmas programming event.