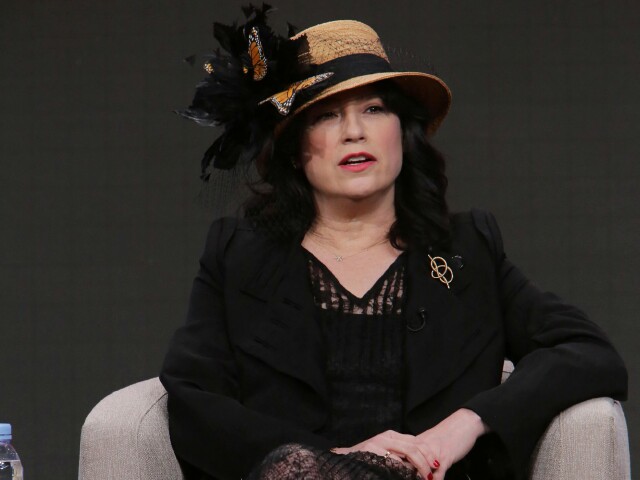 Beverly Hills, CA -- Netflix opened the Summer 2016 Television Critics Association tour yesterday with a full schedule of sessions and activities that will collectively prove to be a tough act to follow for the networks and other programming services scheduled to appear here during the next 16 days. (Actually, National Geographic Channel kicked off the tour on Tuesday night. More about that in a future report.) Unlike its memorable day at the Winter 2016 tour, which featured panels for many existing Netflix shows like "Marvel’s Jessica Jones," "Grace and Frankie" and "Orange is the New Black," yesterday was all about upcoming projects, including the continuation of "Gilmore Girls" (a four-part, six-hour limited series titled "Gilmore Girls: A Year in the Life," set to debut in November) and the latest addition to its lineup of Marvel shows, "Luke Cage." The lone exception was a session with the cast and creators of the supernatural thriller "Stranger Things," which debuted earlier this month on Netflix. It proved to be the most popular session of the day.

But Netflix again went way beyond the mere presentation of panels that characterizes the total involvement of many networks and streaming services at TCA tours. In addition to ten press conferences in the Grand Ballroom at the Beverly Hilton Hotel, the home of summer TCA gatherings, Netflix took over a second ballroom and turned it into a lounge area for the press to use throughout the day. Believe it or not, no network does that any more, though 20 years ago they all hosted hospitality suites where reporters and critics could hang out and talk about the day’s events with their fellow journalists, network publicists and, occasionally, talent.

Then there were the alternate experiences Netflix made available to TCA members throughout the day in other areas of the hotel. They included informal press conferences with producers from such established Netflix properties as Narcos, BoJack Horseman and Lady Dynamite; a Gilmore Girls gazebo that served as a backdrop for a photo op in Stars Hollow (the town in which the show is set); a virtual reality visit to the eerie world of Stranger Things, and a hip-hop tutorial in the penthouse of the Hilton by the legendary Grandmaster Flash, a producer of Netflix’s upcoming drama about the birth of that genre, The Get Down.

In mid-afternoon there was an event the likes of which I haven’t seen in over 25 years of covering TCA tours: The Netflix Puppy Panel. Dogs from such Netflix series as Lady Dynamite, Fuller House, the upcoming historical drama The Crown and Gilmore Girls: A Year in the Life; Chelsea Handler’s beloved Chunk, and Ranger, a D.E.A. enforcement ranger who is, according to a Netflix spokesperson, an “advisor” on Narcos were seated on the stage for an authorized photo opportunity that reporters couldn’t resist.

Interestingly, as dozens of critics paraded by the dogs, Ranger of the D.E.A. began repeatedly whining and barking, as if he were on to something.

Earlier there was a session with Ted Sarandos during which Netflix’s Chief Content Officer once again dismissed concerns about ratings for the service’s programming and marginalized recent reports about same by Nielsen and Symphony. In fact, he pointed out that one of those services asserted that ratings for Orange is the New Black were twice as high as those reported by the other company.

“Subscriber growth, not advertising, drives our revenues,” he reminded the room. Short-term performance of shows “has really no relevance for us.” The usual announcements about highly intriguing future programming followed, including a pre-school show from The Jim Henson Company created by and starring Julie Andrews titled Julie’s Greenroom and a contemporary version of the classic ‘70s sitcom One Day at a Time from the executive producer of the original, Norman Lear. (Why is it, I could only wonder, that Lear – arguably the most influential television producer not simply of the ‘70s but in the history of the medium – can no longer sell a series to a broadcast or cable network but is welcome on a streaming service? As it happened, he celebrated his 94th birthday yesterday – not at TCA.) 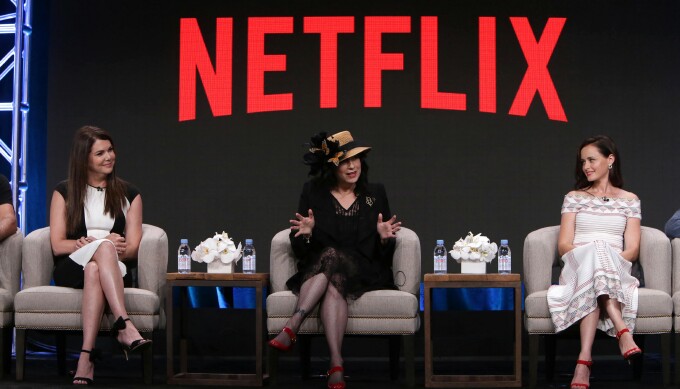 Netflix (like competitor Amazon) has distinguished itself in large part by debuting entire seasons of its original and acquired series all at once, which further fuels the binge-watching that has become synonymous with the streaming experience. (Hulu, on the other hand, tends to parcel out original episodes of its series programming, much like broadcast and cable networks.) The talent involved has always seemed to embrace the practice. (Grace and Frankie star Jane Fonda, for example, always says when being interviewed about her show that an entire season can be enjoyed in a mere 6 ½ hours.)  But yesterday, perhaps for the first time ever, a producer of a Netflix show expressed distress with the practice.

Gilmore Girls creator and executive producer Amy Sherman-Palladino (pictured at top and above with Gilmore stars Lauren Graham and Alexis Bledel) is very sensitive to the fact that when the four episodes of her upcoming series debut in November, the long-awaited final four words spoken in the final moments of the series -- something she has talked about for a long time, and which fans believed they would never hear because she abruptly left Gilmore Girls before its seventh and final season, when it was turned over to other producers – will end up “all over the Internet” and ruin the experience for so many fans. She had hoped to delay the inevitable by having Netflix break tradition and premiere each episode one week at a time. But that won’t be happening.

Netflix executives, it seems, wouldn’t budge when she asked them to make an exception to their usual practice.

“I told them I was going to hang myself from a shower curtain if they put them all out,” she quipped. “And they said, ‘Well, okay.’

“It was my hope to put them out separately because ... it’s such a build to the last four words and because we live in an age where I know people are going to go right to the last four words and then put them on the Internet and possibly spoil it for people who are going to take the journey,” she continued. “However, you don’t always get what you want. Trust me. I don’t have the ass I want.

“I didn’t get to put [the episodes] out separately,” Sherman-Palladino concluded. “But the good outweighs the bad in the sense that this is a wonderful place to be able to create things and do things in a different way. So, you know, the shower curtain will have to wait.”