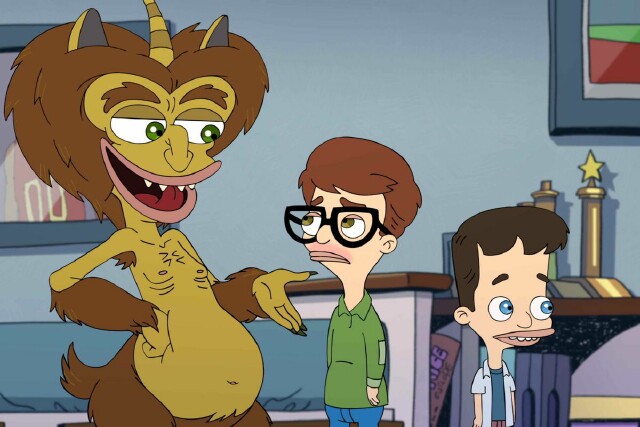 The beauty of Netflix’s deliciously absurd animated tour de force Big Mouth,about the harrowing time kids have coming of age, lies in its ability to always be equal parts extreme cognitive empathy and irreverently crass humor.  Created by Jennifer Flackett, Andrew Goldberg, Nick Kroll and Mark Levin, this (hopefully) never-ending story of how awesome and terrible growing up can be has just entered its third season, and not surprisingly (given the talent involved) constantly one-ups itself.  Fortunately, the traumatic tale of being dragged kicking and screaming into adulthood is a rich one, capable of taking infinite forms while remaining relatable, and these four folks are just the ones to be telling it.

While Big Mouth (which has a 100% fresh rating on Rotten Tomatoes, by the way) tackles pretty much every issue surrounding the phenomenon known as adolescence, a lot of the inspiration for the events of the show came from the lives of two of its creators, Kroll and Goldberg.  With Kroll honing his comedic chops doing standup since the ‘90s and Goldberg having worked on Family Guyfor years (not to mention the massive comedic accomplishments of their illustrious cast), there’s no question as to how the show became both painfully honest and ridiculously funny.

That honesty, which is honestly the main thing that tethers this over-the-top acid trip version of a sex-ed video to any sort of reality, is also due in large part to the other half of this quartet: Flackett and Levin.  The numerous other writers involved have undoubtedly contributed a great deal to the success of this show, but it would be crazy to think that Levin’s time working on the classic coming-of-age series The Wonder Years and Flackett’s time working on the legendary teenage drama 90210 wasn’t in each case a direct influence/benefit when working on this project. 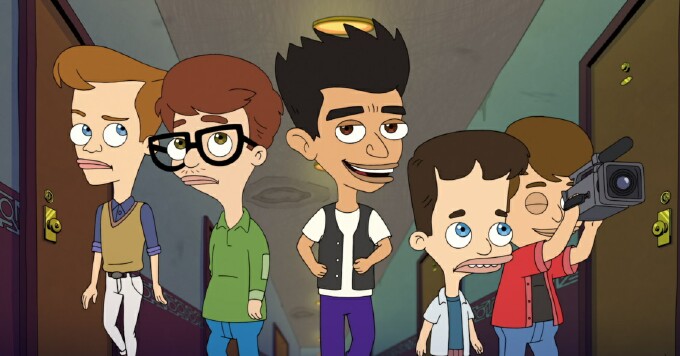 Exaggerated as it may be, Big Mouth’s depiction of being in the throes of puberty always feels pretty accurate, and regardless of who you are its one of those things that literally everyone can identify with, even if each of our personal experiences varies to some degree.  Characters like the Hormone Monsters, the Shame Wizard and the most recent addition, Depression Kitty, perfectly personify the intense feelings of insecurity, impulsiveness, fear and wonder that come with the discovery of what one’s body and mind go through at a certain age.

Big Mouth isn’t taking this responsibility lightly, either.  Let’s just forget for a moment that the kids that this series would be most helpful to are definitely too young to watch it, and then let’s remember that they’re probably watching it anyway.  In this respect, BM’s handling of such standard teen traumas as getting one’s period, a friend seeing you naked, some girl in your grade suddenly having boobs, etc., to some that are spoken of a lot less (especially on television) has truly been masterful.

Notable episodes in this regard are … well, all of them, but if I had to choose my picks for most important/most impressive moments involving these sensitive issues, I’d have to call out The Planned Parenthood Show, Drug Buddies and season two’s finale, The Department of Puberty.  While the first two episodes I’ve just mentioned have pretty self-explanatory titles, The Department of Puberty was probably the most effective episode of the bunch, or at least the most versatile, as it both introduced Depression Kitty (played by Jean Smart) and gave us the moments where Jay (Jason Mantzoukas) came to terms with his bi-sexuality in about as satisfying a way as possible.

Big Mouth’s superpower is not having any filter, or any limits.  Too often, our most humanizing and equalizing experiences are made out to be something we’re supposed to be ashamed of (hence the Shame Wizard, voiced by David Thewlis), but not only does this show not give any effs in the best possible way, it uses that bravery to shine a blisteringly bright spotlight on not only the stuff Kroll and his generation went through as kids, but also the stuff our current younger generations are going through right now.  Access to porn through cellphones, the way social media and technology affect things like bullying and slut shaming, finding Dad’s gummy edibles; Big Mouth hits the nail on the head when dealing with stuff like this, and it is its own personal lack of bashfulness (or maybe the prior presence thereof) that allows the creative team to effectively do so.

In the upcoming season, we can expect more of the Big Mouth we love, including more Hormone Monsters (a new one named Mona, voiced by Westworld’s Thandie Newton, will appear for Jenny Slate’s character, Missy), special guest appearances (animated versions of the guys from Queer Eye will attempt to give Coach Steve a makeover) and enticing new characters.  (Ali Wong will be joining the cast as a new student at the school.)

I’ve no doubt that this series will go down as one of most innovative and trailblazing and above all honest animated series of all time.  Netflix obviously agrees, considering that it ordered three more seasons of the series in July.