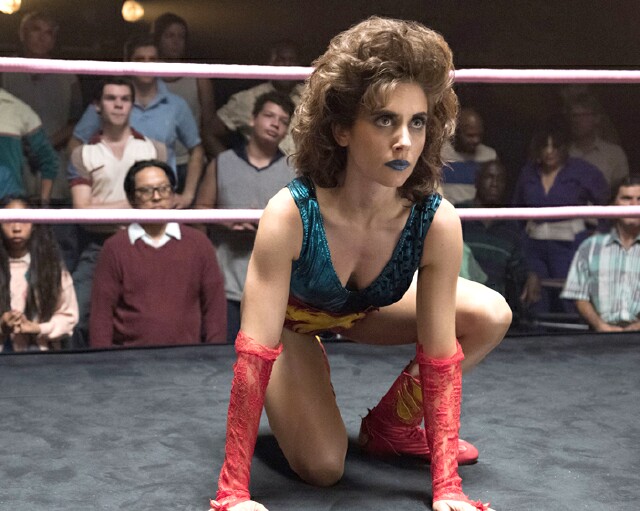 Netflix’s GLOW is so much more than just a fictional exploration of the lives of America’s very real Eighties sensation, the Gorgeous Ladies of Wrestling.  Created by Liz Flahive and Carly Mensch -- both of whom have worked on other strong female-character driven projects like Nurse Jackie, Homeland and Marvel’s upcoming Captain Marvel -- and produced by a very accomplished (and almost all-female) group of people that includes Jenji Kohan (Weeds)-- this dramedy is the perfect balance of gut-busting humor and the gut-wrenching realities of life.  Based on the 1986 show of the same name, GLOW follows the lives of an eclectic group of female professionals (actresses, stuntwomen, dancers and models) who simultaneously became both professional wrestlers and the cast of a unique wrestling/variety show, all in an attempt to get Hollywood to give them a fair shake.  Now, after two full seasons of emotionally intelligent writing, carefully crafted characters, expertly executed stunts and multiple award nominations, GLOW has been given something even more valuable than a championship belt: a third season.  Let’s talk about why.

Starring Alison Brie (pictured at top), Marc Maron and Betty Gilpin, among many other uber-talents, GLOW hasn’t wasted a single second of its past two seasons touting any finger-wagging faux feminism.  In fact, the show has chosen to deal with the issues of inequality, racism and sexual identity in the most organic way possible.  These themes weren’t forced into the show to make it relevant to any particular movement (#MeToo or otherwise); rather they were woven into its tapestry, further enhancing the overall idea that these women (and men) are, above all else, real people.  They have families, dreams, personal hang ups and conflicting ideals, and they are all dealing with the unique circumstances of the era they’re in -- fleshing out what could have very easily been archetypal, one-note characters.

Take Ruth (Brie).  She is, for all intents and purposes, a good person.  She loves Debbie (Gilpin) with whom she’s been best friends for years.  Unfortunately for all involved, in Season One Ruth has an affair with Debbie’s husband.  Spoiler alert: Debbie’s not thrilled about it.  This dynamic becomes the emotional cornerstone for their entire on-screen relationship and one of the pillars of the overall narrative.  This betrayal, and the subsequent destruction of Debbie’s marriage, is a silent implosion that causes her to unravel like a slow-motion car crash throughout pretty much the entire season.  She is devastated, her world crumbling around her, and to add insult to injury the one person who understood her on a deep enough level to really be there for her, someone with whom she’s now meant to work on a daily basis, is the designer of her pain.  The anger she feels towards Ruth for taking both her husband and her best friend away from her is damn near tangible.  Brie and Gilpin do an epic job of bringing that, as well as the other dynamics of their friendship, to life on screen in a way that’s both entertaining and believable, to say the least.

Then there’s Sam (Maron), the jaded, seen-it-all B-movie director and his relationship with Ruth which, towards the end of Season Two, morphs from Sam’s obvious contempt for this woman into an enviable friendship with an appealing dynamic: the sarcastic cynic, and his emotionally mature counterpart.  It didn’t always work that way, though.

Initially he didn’t care at all for her wide-eyed, spunky, never-say-die attitude.  But then again he didn’t really care for any of the ladies at first, probably because they were just a means to an end for him:  His producer “Bash” (Chris Lowell) promised to fund one of Sam’s movies if he directed GLOW, a fact which made them all replaceable.  Hammering this point home is the opening of Season Two where Sam, while feeling threatened by KDTV’s semi-involvement of another “more experienced” director, fires Marianna Palka’s character Reggie (a.k.a. Vicky the Viking) after she openly challenges him in front of the group.

While Sam is initially painted as someone who was more a part of the problem than the solution when it came to how women were treated in the late Eighties, it was his sort of semi-likable, Bad News Bears-y grumpiness -- and the melting away thereof -- that ended up being his defining arc.  The whole reason that very unfair moment mattered even a little bit to me wasn’t because of what a Vicky the Viking fan I was.  It was because over the course of Season One I’d seen Sam grow and watched his heart soften a bit -- and after the bombshell that one of his wrestlers (Britt Baron’s character Justine) was his daughter it was disappointing to watch him do something so indicative of who I thought he used to be. 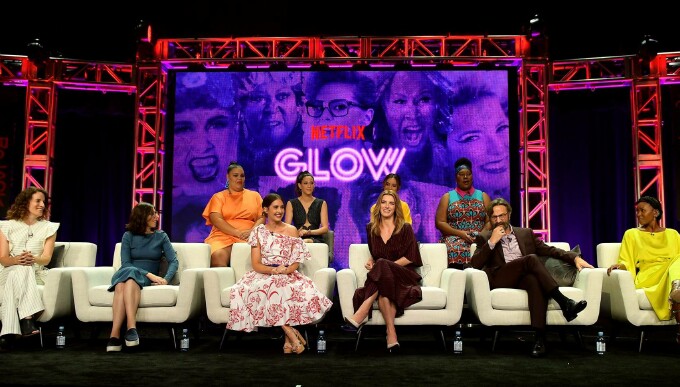 Again, a show like this -- a true ensemble comedy, coming in at just 30-ish minutes with a whopping 16 leads -- would normally find establishing so many characters in such a short amount of time to be an extremely challenging undertaking.  GLOW’s writers took that task to the mat and came out on top.  Yes, it was the combination of poignant moments, high-flying stunts and those f**kin’ amazing costumes that initially did the heavy lifting and commanded my attention, but it’s the tapestry of stories and its ability to change the mood of a scene on a dime that truly sells it for me.  (Cast members and producers are pictured above at a panel for the show during Netflix's day at the 2018 Summer Television Critics Association tour.)

There are so many moments of seemingly universal truth dropped in the form of undeniably entertaining one-liners that I could’ve written another column solely dedicated to quotes.  One of my faves?  It’s got to be what Sam says to Ruth after Justine is forced to go back home with her mother.  He says, “You let somebody in, you know?  And then you make room.  Then they go and yet the room is still there.”  Chills.

I could go on about how every cast member of the soccer team-sized roster makes an undisputable, irreplaceable contribution to what ended up being far a better show than I’d have ever anticipated.  I could talk about how seeing these real-life actors actually wrestle gave me so much respect for them as performers, or about how every character is as multi-faceted and realistic as their wrestling personas are one dimensional.  I could talk about how the fact that this story takes place in the Eighties isn’t beaten to death or over-played, but is actually more of a subtle background player in the way that real life is.

All I know for sure is that what made the original GLOW special was the fact that it was a crazy, unique, amazing flash-in-the-pan look at American life, and then it was gone.  Now that story’s being retold, and even though Netflix’s production is very much not a documentary, it’s themes of discrimination, depression, friendship, betrayal, growth, duty, sexism, equality and family chosen vs. family given are as relevant today as they were in 1986.  These are conversations that need to be had, and TV needs more of this.  We all do.