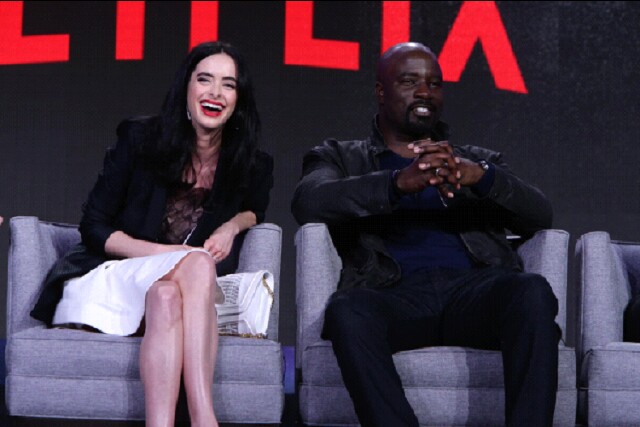 Pasadena, CA – I’ve seen a lot of networks mount massive publicity efforts at dozens of TCA tours during the last 25 years, but I have never seen one take over an entire hotel. Then again, Netflix is not just any network.

Following much briefer but no less effective presentations earlier in the Winter 2016 Television Critics Association tour by Hulu and Amazon, Netflix stepped up in a big way on Sunday by putting together a day-long presentation filled with compelling panels for current and returning series “Marvel's Daredevil” (pictured below), “Marvel's Jessica Jones,” “Orange is the New Black,” “Master of None,” “Unbreakable Kimmy Schmidt,” “Grace and Frankie,” “Narcos” and “Making a Murderer” and upcoming shows “The Ranch” (a sitcom with Ashton Kutcher and Debra Winger), “Degrassi: Next Class” (a continuation of the long-running Canadian teen series) and “Love” (another of those contemporary rom-coms that are popping up on streaming services like acne on an adolescent), plus previews of several standup specials. 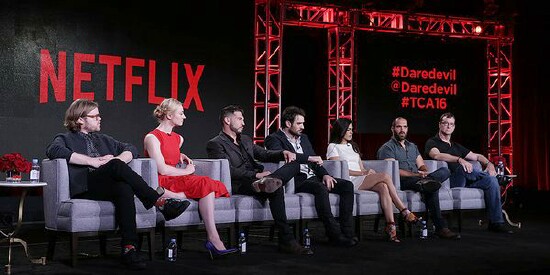 Any doubts about the power of streaming services and the talent they attract was eradicated by the caliber of acting talent seen wandering about the Langham Huntington Hotel, the location of this tour, including Jane Fonda, Lily Tomlin, Ashton Kutcher, Sam Elliott, Debra Winger, Aziz Ansari, Tina Fey, Jane Krakowski, Krysten Ritter (pictured at top with her "Jessica Jones" co-star Mike Colter), Charlie Cox, Laverne Cox, Candace Cameron Bure and Judd Apatow. (Previously, James Franco, J.J. Abrams, Chris Cooper, Josh Duhamel and T.R. Knight were here for Hulu’s upcoming miniseries “11.22.63” and Aaron Paul and Hugh Dancy came by to promote its drama series “The Path.” Amazon brought in Steve Zahn and Ben Chaplin for its “blue-sky adventure” “Mad Dogs” and Rob Delaney and Sharon Horgan of “Catastrophe,” among others. Amazon was riding high that day, having received Golden Globe Awards the night before for its comedy series “Mozart in the Jungle” and the star of that series, Gael Garcia Bernal.)

But what really stood out about Netflix’s presentation at TCA was the amount of hotel real estate it occupied throughout the day. Deep details 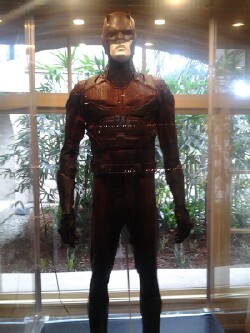 wouldn’t mean much to anyone not familiar with the labyrinthine Langham Hotel; I’ll just note that the service occupied all three cavernous ballrooms, the expansive lounge area (where many networks host parties) and the two enormous hallways on either side of the central courtyard, plus a number of smaller areas. In the hallways were floor-to-ceiling glass cases housing costumes and clothing worn by characters in several Netflix series. (That’s Daredevil’s costume in the photo at right.)

Of course, the real news of the day came during the opening session with Netflix's Chief Content Officer Ted Sarandos, who told reporters Netflix this year expects to “offer our members in 190 countries more than 600 hours of new high quality original content from some of the world’s most talented people. We’re creating an incredible range of series and films, entertainment designed to appeal to people of every age and of every taste and of different cultures.”

Then Sarandos cut to the chase. “Because we’re not courting advertisers, because we’re not programming to a single demographic and because we are global and on demand, we have the unique and expansive opportunity to tell great stories,” he said.

On the subject of Peak TV, Sarandos (pictured below) remarked, “We don’t think there’s too much TV, and if there is too much TV, someone else is going to have to slow down because we have big plans for 2016 and beyond. People want choice in voices, in attitudes, in points of view and in genres, from stand-up comedy to Oscar nominated documentaries, and from kids’ shows to very sophisticated dramas. Our members come to us looking for something great to watch, and personalization allows us to give them the exact title that they’re going to love the most. It may be on the first day of availability, or it might be months later or even years later. The entire household benefits from this personalization because each family member can create and enjoy their own Netflix by setting up their own profiles. It’s our job as a content team to make sure we have the right stories to meet their desires. 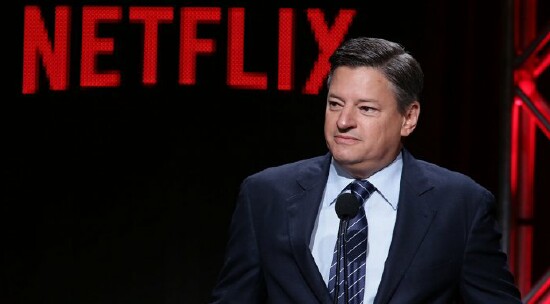 “We are running a global network, one that is not easily comparable, either in business or in cultural terms, to anything that’s come before.”

It wouldn’t be a press conference with Sarandos without questions about Netflix’s ratings, which the streamer chooses not to reveal. His answers were largely similar to those that have come before. “18-49 viewing is so insignificant to us that I can’t even tell you how many 18-49 year-old members we have,” he said. “We don’t track it. It’s an advertising driven demographic that means nothing to Netflix.

“You have to understand the difference between Netflix and all linear television networks that report [their] ratings is those sample sets don’t give you a lot of information when people are watching literally thousands of different shows all the time in all different countries. So when you’re trying to measure our ratings as a measurement of our success, you’d have to remember that in somewhere in the world, every second of every day, someone is pushing play to start a Netflix original show. That’s a fact.”

Asked about producing programming for other countries, Sarandos noted, “We’ve had millions of people watch French language television on Netflix, which gives us great confidence to produce French language television for France, because we believe we’ll be able to get millions of people to watch it outside of France. This enables us to put production value behind an hour of French television like French people have never seen before.

“We are also producing original shows right now in Brazil that we are really excited about. A second local language show in Mexico is about to go into production. We don’t think about it as domestic or international. We think of it all as different flavors of global television.”