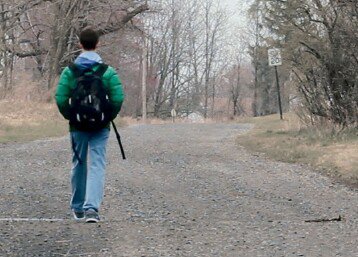 There are more homemade and professional video series on the Internet than anyone could ever hope to count, let alone watch. Some of them are instructional, informative and educational. Many more are terrifically entertaining, depending on one's taste. But few of them have the potential to save lives while also entertaining and educating their viewers.

One new video series debuted last week that can claim to potentially do all of those things. I imagine by the time you read this you will have already heard mention of it somewhere, because in addition to being an important effort it is an outstanding production. It's a six-part musical drama series titled "The Hinterlands," and while it's directly targeted to teenagers who are bullied for whatever reason, there is something in it for everyone. It is well-acted and smartly written, with production values that are of television or movie quality. And to judge from the first episode, the musical sequences (which enhance but do not detract from or overpower the story) are both catchy and deeply moving. As such, The Hinterlands resembles the best parts of Glee without all the snarky junk that surrounds them.

The central character in The Hinterlands is Paul (Connor Russell), a gay sixteen year old who lives in the middle of nowhere. He describes himself as "massively into theoretical physics," says his hero is Stephen Hawking, admits he has no friends (though the first episode suggests otherwise) and is certain he is going to flunk gym. Described on the series' Web site as a "scrawny gay science nerd," Paul says that when he's in school, "walking down the hall is like wearing a steak shirt while swimming with sharks." Apparently the harassment Paul suffers as the series progresses will lead him to contemplate suicide, though I can't believe the character is going to go there since he's the one with whom troubled or bullied young viewers are intended to identify.

The Hinterlands was written, directed and produced by Michelle Elliott and Danny Larsen, two hugely talented young people with very promising careers ahead of them in musical theater and television. On their Web site Elliott and Larsen explain that they chose to produce this project as a Web musical rather than a staged production because "kids in the real hinterlands are the most in need of a project like this, as some communities are highly intolerant of gay, lesbian, bi-sexual and transgender kids."

Largely funded via Indiegogo, the first episode of The Hinterlands was posted last week. Five more will debut throughout November and December.

near-disappearance of daytime dramas on the broadcast networks. Dozens of soap opera stars who have suddenly found themselves out of work have joined Web soaps, which seem to represent an exciting new frontier for serialized storytelling. A few of them (most notably "Venice") have stood out from the rest, primarily because of their production values. But the overall future of such productions remains uncertain.

One soap star recently decided to embrace Web programming without joining an existing Internet serial. Michelle Stafford, a two-time Emmy winner during her sixteen year run on CBS' The Young and the Restless, last summer left her role as sexy schemer Phyllis Summers Romalotti Abbott Newman and almost immediately launched her own Web series, The Stafford Project. Stafford says it's a comedy loosely based on her life as a forty-something single-mother and actress looking for love and work in Hollywood while a camera crew documents her every move. In the series Stafford is taking tentative steps into reality television on the advice of her management team. "No more of you being the mother of a 20 year old who was just born last month," her agent asserts.

In many ways The Stafford Project is a much better vehicle for Stafford than a role in one of the many overcrowded Web soaps currently available online, in that she is largely front and center throughout each of the episodes, which average 8-12 minutes. I always enjoyed her work on Y&R, which was unfailingly sexy and sometimes lighthearted but more often than not extremely dramatic. Stafford Project gives her a chance to show off her controlled comic timing and she doesn't miss a beat. In more than one episode I found myself thinking of her as a younger Diane Keaton. In fact, after watching this series I can see her playing Keaton's kid sister in a movie, something that never crossed my mind during her entire time on Y&R. 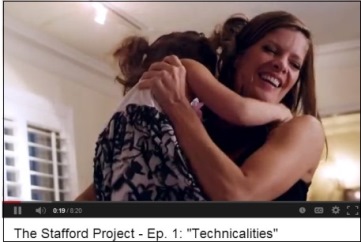 Joshua Morrow, Thorsten Kaye and Brandon Beemer, three actors known primarily for their work on daytime dramas, have appeared as guest stars on The Stafford Project and, like Stafford, each has revealed a heretofore unseen gift for grand comic delivery and self-deprecation. I would imagine many of Stafford's soap acquaintances must be champing at the bit to appear on her series and give fans (and the industry) a chance to see them do something different.

Clearly, it might make more sense for soap opera actors (or any actors, for that matter) to consider producing this kind of a show on their own as an excellent promotional platform (and to keep themselves on the industry's radar). It's also a great way for them to keep fans engaged.

Some episodes of The Stafford Project feel a little too long, but most of them are just right. The eighth and most recent installment was posted this week on www.michellestafford.com and on YouTube.