NewFront News and Views: Creators and Interactivity Rule at YouTube 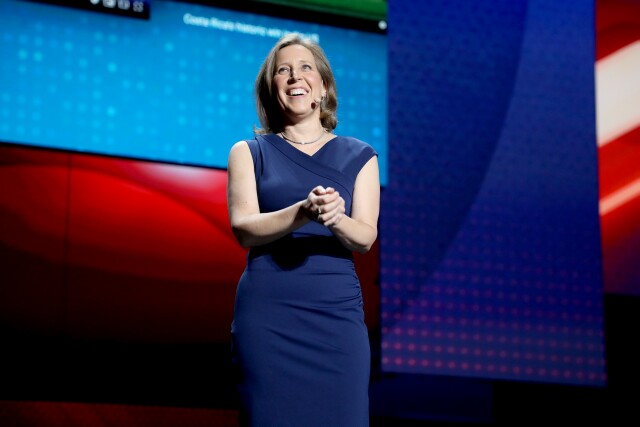 Now that YouTube has staked a claim to closing night of the Digital Content NewFront, it’s become an annual ritual to raise a pair of questions concerning the Google-owned venture’s Brandcast.  What new developments will break out there, and can you get more spectacular this time around than last time?

Venue:  Radio City Music Hall for the second straight year.  When attendees walked into the space, they were greeted by a large burgundy diorama on stage flashing photos of YouTube creators and personalities.  Guests were offered popcorn and other snacks from representatives walking down the aisles.

Presentation:  Another two-act affair, with all the speeches, testimonials and announcements from YouTube executives highlighting the first act, followed by a succession of eye-popping production numbers and creator turns in the second.  This event’s opening sequences have become memorable moments for any NewFront or Upfront, and once more, things literally started on a high note.  Three string instrument players were raised to center stage, soon accompanied by other orchestra members standing above the stage on either side, all making music to a parade of video clips and graphics.

From there, YouTube Chief Executive Officer Susan Wojcicki (pictured at top) saluted the service’s universe of content creators.  “They are on the cutting edge of culture, creating entirely new genres we could never have imagined beforehand, and diversifying our perspectives in the process,” she declared.  As a result, viewers now flourish in an environment where “primetime is personal … every one of us has our own primetime, and no one’s primetime is the same.”

Later on, Johnson & Johnson Global Chief Marketing Officer Alison Lewis explained why her organization is all-in with YouTube campaigns, jumping investment 250% over the last three years.  “(We get) a direct line to our audience, allowing us to engage with them on their passions,” Lewis explained, with elaborate graphics on display.  “Not only that, we’re able to customize our messages on the fly, evolving as fast as the weather changes.”

News:  Sponsors wanting to take part in YouTube’s growing number of “Originals” content will get that opportunity later this year.  From that point on, viewers can choose to watch them commercial-free for a charge, or free with ads.  The coming lineup includes Show Me the Evidence (investigations of unique phenomena), Retro Tech (pop culture tech trends with creator Marques Brownlee) and a top-secret undertaking with music superstar Justin Bieber.  Also on display: new seasons of scripted series CobraKai, Impulse and Liza on Demand.  Post-event, YouTube announced the premiere of its first interactive program this fall, just two weeks after hiring a full-time executive to generate both scripted and unscripted ITV as well as live events.  A Heist with Markiplier (co-produced with Rooster Teeth) will invite viewers to guide Markiplier (a.k.a. Mark Fischbach) through a museum robbery.

Star Turn:  A musical lineup to behold, with knockout performances from Dua Lupa, Lele Pons and Daddy Yankee, complete with backup dancers and lighting effects that at times converted the Radio City Music Hall ceiling into the Hayden Planetarium.  During one second-act sequence, balloons and cookies rained down on the audience (photo below).  That’s right – rained!  Comedian/actress Tiffany Haddish had the crowd in constant belly laughs, telling us how YouTube impacted her life.  “I’m a mechanic now,” Haddish said.  “I’m a reiki healer now.  I can also make Red Button shoes, but you can’t walk that far because they turn into brown bottoms.” 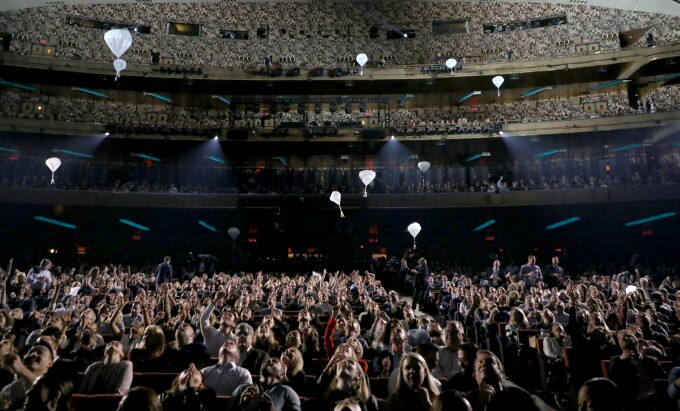 Innovative Opportunities:  More available time on YouTube TV’s lineup of 70-plus broadcast and cable channels, where inventory can be bought based on audience reach by personal interests or demographics.

Cuisine:  Brownies were served along with the popcorn, water and soda pre-event.

Key Takeaway:  Recent reports of YouTube cutting back on scripted original series may be exaggerated, especially if they become a hot advertiser item -- and become a centerpiece of the interactive TV strategy under formulation.