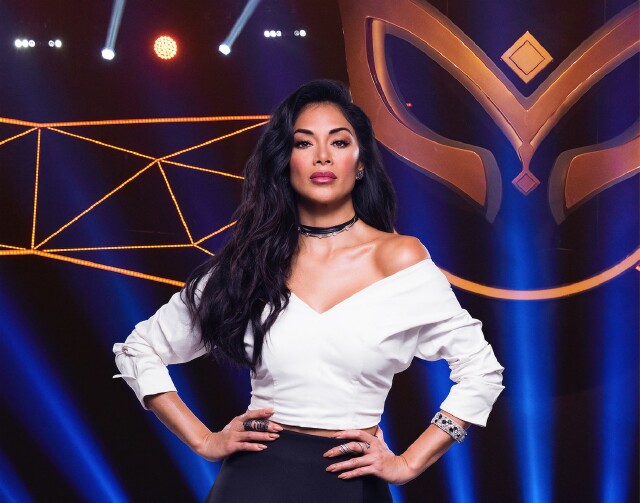 Last week Fox’s new singing competition The Masked Singer -- the first breakout hit of 2019 -- introduced us to the first six of its twelve high-profile competitors.  The show’s instant success was not all that surprising as the series it’s based on, South Korea’s The King of Masked Singer, has a viral following of over half a billion fans worldwide.  The series features masked celebrities (from actors to athletes) facing off in a “who-sung-it” while wearing wild outfits the likes of which Lady Gaga might consider giving a limb to own.  Hosted by Nick Cannon, the show also features an all-star panel tasked with figuring out who’s behind the masks.  While Ken Jeong, Nicole Scherzinger, Jenny McCarthy and Robin Thicke (pictured below, with Cannon at center) gel well together, one of them almost landed on the other side of the desk. “They actually invited me to be a performer and I considered it,” Scherzinger revealed when MediaVillage recently spoke with her.  “But then I was invited to be a part of the panel and I just thought it would be really fun to do something so different.

“The show is like kind of like The Voice meets Jeopardy meets Password,” she continued.  “I've done singing competition shows before, but this really isn't the same.  It’s unlike anything else out there; that's why I decided to do it.  I was actually a little scared to do it because it was so different, but I usually like to take chances and do things that scare me.  This is innovative and bizarre, and I feel I'm bizarre as well, so I thought I would fit right in.” 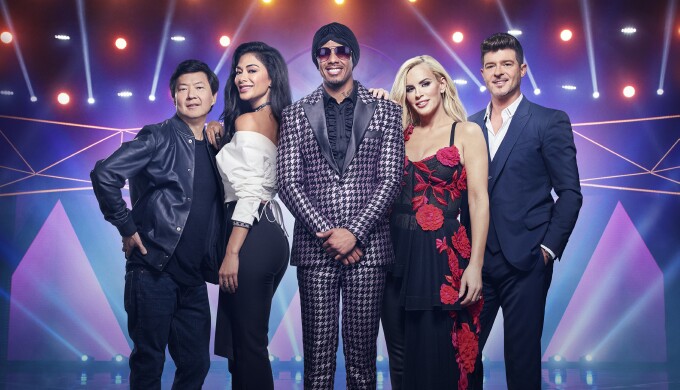 Despite having a huge online following, Scherzinger had no idea what the show was when it was first offered to her. “It was all brand new to me,” she said.  “They showed me a sizzle reel and my mouth dropped.  I think the show will touch people in so many different ways because it has a lot of humor, the performance values are great, as is the entertainment value, and it also has a lot of heart -- surprisingly.”

For Scherzinger, the hardest part of doing the show was guessing who was under the mask, despite clues to the singer’s identity being provided throughout. “I'm horrible at guessing who people are, even without the costume,” she laughed. Instead, she relied on panel-mate Jenny McCarthy, whom she referred to as “a detective,” for answers.  “I was pretty shocked; I never knew who anybody was,” she said of the pre-taped shows, “although with a couple of people I did feel I knew their voices and some I just couldn't believe.”

Scherzinger believes the masks give people a whole new confidence, allowing them to overcome any fear and be open with their vulnerability.  “I think a lot of people did it because they wanted to share a different side to them,” she said.  “They wanted no preconceived notions or to be judged, just to share what they love and that doesn't mean they have to be the best at it.  They just wanted to connect through music.  I fell in love with the panel, the celebrities and the costumes.  In a weird twist that while filming I was [often] crying.  It was quite cathartic for a lot of the contestants and for us.”

While she’s content behind the panel’s desk, had Scherzinger decided to don a mask and step out to perform she might have given her competitors a run for their money.  Indeed, that may still happen.  “You never know, I might surprise viewers at some point!” she said with a laugh.  “I have many different voices, so no one will ever guess it's me.  I can actually imitate a lot of different voices and have a pretty crazy range.”

With all episodes of The Masked Singer in the can, the former Pussycat Doll is currently exercising that range in the recording studio, working on new material.  “I'm excited about that, as I have been in it for a while,” she told me.  “I need to get back in the zone but that's also very cathartic for me and my focus right now.” She’s also reading scripts.  She’d love to do a musical and isn’t ruling out the possibility of a Pussycat Dolls reunion.  “We'll see what happens,” she teased.  “I am talking to the girls and I'm happy that everybody's doing their own thing, but you never know with that.”

The Masked Singer is telecast Wednesday at 9 p.m. on Fox.