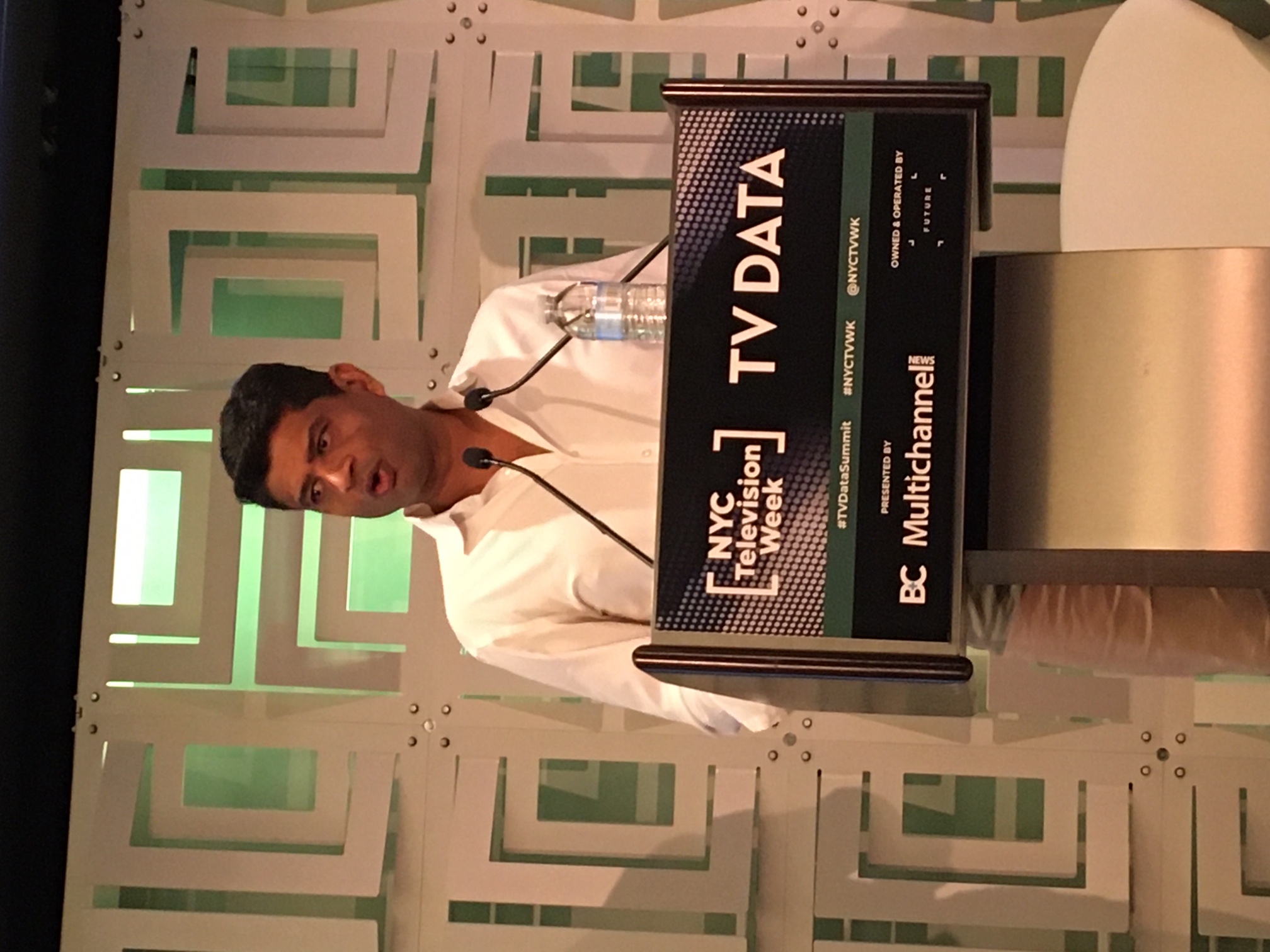 Is it science fiction or are we now in a world where consumers can expand time? It seems that expanding time is possible — at least in terms of overall hours of media usage. With more media platforms and only so many hours in a day, "consumers are spending more time overall on media," said Karthik Rao (pictured above), chief product and technology officer of Nielsen Global Media. His keynote at the recent Data Conference at New York City Television Week 2019 focused on the expansion of media options, how it impacts viewer behavior, and Nielsen's role in ensuring that media usage is measured, explained, and acted on correctly.

Does anyone sleep anymore?

Of course, with only so much time in a day, this impressive growth in usage means more multitasking is taking place. Rao also noted that we now have the ability to "access media when and where we might not have been able to before." Easy access to content on a smartphone, for example, enables someone to fill in the gaps of time spent waiting in line, commuting, and the like by engaging in content.

Enrich, Understand, and Respect the Consumer

"Consumers are willing to expand time because there are more choices," Rao noted. For Nielsen, that means "we have to fundamentally enrich, understand, and respect the consumer experiences, with the biggest word being respect." To Rao, this means not having the viewer "going to every single platform and getting the same damn ad over and over. It is disrespectful." He added: "People can't handle that many ads. They tune out."

For Nielsen, there are five monetization opportunities for media spend, including traditional reach advertising through linear, targeted advertising with audience buys, no advertising such as with SVOD, branded integration such as product placement, and trade marketing, which hit $1 trillion globally. Measurement of these options must include the correct coverage, inclusion of all necessary data points, and diversity representation of audiences to measure total audience. And it must cover all platforms. "We look for the next way that time can expand," he stated.

Nielsen's role "is to organize all of that," as well as understand the impact of reach and frequency — the next relevant metrics — and track the consumer experience with multi-touch attribution to "create a touchpoint and a metric between touchpoints." The goal is simple: measure total audience, measure outcomes, and expand globally.

The Changing Nature of Media Measurement

In a business that has historically sold on GRPs based on age and gender, the move to impressions-based selling is a notable change. Nielsen, according to Rao, supports this move. "Anything that helps [sellers and buyers] make sense of their transactions," he said.

Rao added that "consumer experiences are about people and impressions are not people. We need to recognize this. We want to raise the bar on what we are trying to solve and, when you do, the role of each data point changes, and you use it differently. Change is a good thing and we want to be a part of it."

Managing the torrent of data is as much of an art as a science. For Rao, it has to begin with following the money. "Use it as a roadmap," he advised. "Things become clearer. Money begins with the advertisers." From there, he said, ask yourself, "What is the persona? What is the advertiser or brand trying to solve for?" In fact, he recommended that advertisers focus on the roles that different data sets play in either depth or breadth. "It is less about tech," he noted. Instead, it's more about, "What is the value of the data?"

As far as C3 is concerned, "it worked really well for a long time, but it is a blunt metric. It doesn't tell you what happened within any commercial pod. So, it's not great for engagement." But when you get down to the individual ad, as you can do in digital, one gets closer to engagement.

Rao defended the use of panels as important data sources. "Our conviction on the role of the panel is stronger now because of fragmentation," he said. "You have to understand the differences in platforms. If you don't get it right, you can't solve big data problems. So, a truth set is most important. One media truth is the panel. We use it to ideate every piece of data."

Set-top-box data, he added, can be used to enhance the panel because it plays into the dynamic of small- and big-data synergies. "Small data enriches big data. Big data expands small data. Don't confuse [the] relationship," he advised.

As Rao said, it's time for change. The media ecosystem needs to "move beyond a campaign-based view of the world," he said. In a world of small and big-glass screens, "the business model is not the same. But we need some common way to bring them together. That is how TV works," he concluded. "It's always on." Maybe that is why we consumers don't sleep anymore.