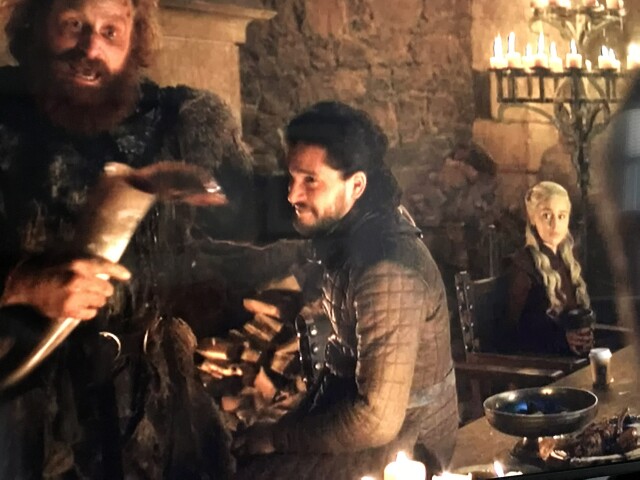 As thousands of advertising and network executives, talent agents, managers, publicists and press people prepare to collide next week with a galaxy of stars to spend endless hours talking about television, here are nine topics to help fill the inevitable lapses in their conversations.

“Game of Thrones” Is Working Our Last Nerve.  Damn.  This show sure knows how to get people going, doesn’t it?  It may not be advertiser supported, even if it did feature the most talked about product misplacement of the year (see object at lower right in photo above).  But it is the only thing on television that everyone is talking about right now.  First came the April 28 episode, The Long Night.  So many complaints.  It was hard to see.  Certain plot elements made no sense.  Others felt decidedly anti-climactic.  How did Brienne, Grey Worm and Jaime fight off thousands of white walkers for so long without losing any body parts?  How did Arya get from there to there so quickly?  How can we care about much else after our heroes literally defeated death?  Above all I thought the episode was way too long -- and yet, I thought the battle contained therein should have gone on longer, with a little character advancement (or something) tossed in just to keep it interesting.

Frankly, it should have ended when (spoiler alert) the Night King menacingly revived his thousands of minions that had already died in the battle while Jon Snow stared in disbelief and defeat.  Millions of GoT fans would have been losing their sh*t all week long in fervid anticipation of the May 5 episode, The Last of the Starks.  About that.  Putting aside the crazy thing with the contemporary coffee cup, I can’t remember the last time an episode of a long-running series upset so many people.  I don’t think I have read or heard a single positive comment about it.  The two shocking deaths at the end seemed to shake people more than the thousands of deaths the previous week (even that of poor Theon).  I hate when a show I have spent years watching “rewards” me for my time by turning on me and making me regret all that wasted time.  At this point I’m not sure the remaining two episodes can possibly change my opinion.  We’ll see.

“Barry” Has Gone Berserk (In the Best Way). Telecast back-to-back with The Long Night, and right before a game-changing episode of Veep, the April 28 episode of this very dark comedy helped make it a night to remember for HBO.  Those bloody battles between Barry and Ronny, the boyfriend of Loche’s ex-wife -- first in Ronny’s house, then in a local market -- were somehow simultaneously epic and intimate.  That would have been enough.  But I have never seen anything quite like the ultra-violent showdowns between Ronny’s young daughter Lily, a scary-good martial arts fighter, and Barry and Fuches.  I like when shows surprise me in fantastic ways without a shark in sight.  Jesse Giacomazzi, as Lily, gave the performance of HBO’s night: brave, bold, scared, seething, vulnerable, vicious and always in command of a very dangerous situation not of her making.  Between Barry and Now Apocalypse, Sunday nights have gotten increasingly surreal. 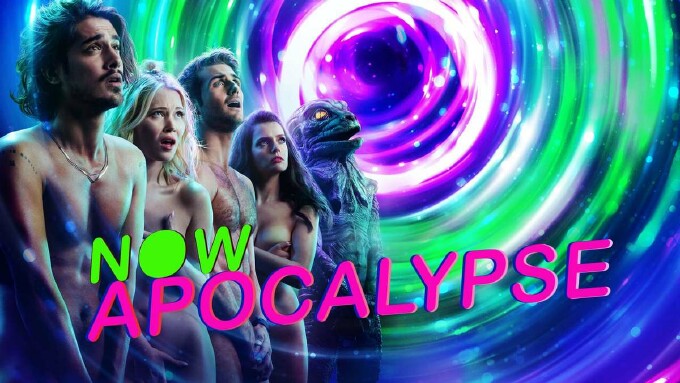 “Now Apocalypse” Is Bringing Sexy Back. Speaking of Now Apocalypse, I’m surprised there isn’t more talk about this boundary-pushing, sexy pleasure from filmmaker Gregg Araki that is one of the strangest and yet most normalizing series to come along in forever.  At a time when television is on the verge of becoming increasingly chaste due to a collective push from a spectrum of societal pressures, Starz' Now Apocalypse is pushing right back with a fearless, judgement-free exploration of sex in multiple permutations.  The show loses none of its heat in those rare scenes that are not about physical pleasure, what with a lizard man from another dimension running around L.A., an angel (or something) played by Tyler Posey appearing to lead character Ulysses (Avan Jogia) and other inexplicable occurrences.  As unapologetically steamy as it gets, though, it can suddenly become profoundly moving, especially when the characters dare to acknowledge the fresh hells that come with being in one's 20s.  I haven’t seen a group of young actors so willing to “go there” since BBC America’s Skins (which gave us Nicholas Hoult of the latest  X-Men movies, Hannah Murray and Joe Dempsie of Game of Thrones, Daniel Kaluuya of Get Out, Dev Patel of Slumdog Millionaire and the remarkable Jack O’Connell, among many other talented kids).  Similar stardom should come to the cast of Apocalypse, now!

But Shonda Rhimes Got There First.  Long before Avan Jogia and Tyler Posey got it on on camera, Shonda Rhimes was heating up television like nobody’s business, with outstanding results.  Who hasn’t enjoyed Grey’s Anatomy, Scandal, How to Get Away with Murderand/or Station 19, among many others?  But, at a time when millions of people are fearful of losing their jobs if they so much as look at a colleague the wrong way or bump into each other in the hall, has anyone noticed that Rhimes’ past and present shows on ABC have virtually spun around behavior in the workplace that would get the rest of us canned?  Co-workers hump, bump, flirt and fornicate whenever they can.  And yet, not a peep of protest.  Quite the opposite.  (Me?  I’m not griping.  I have long believed that broadcast television needs to grow the f*ck up.  Now, I can’t wait to see what Rhimes does over at Netflix.) 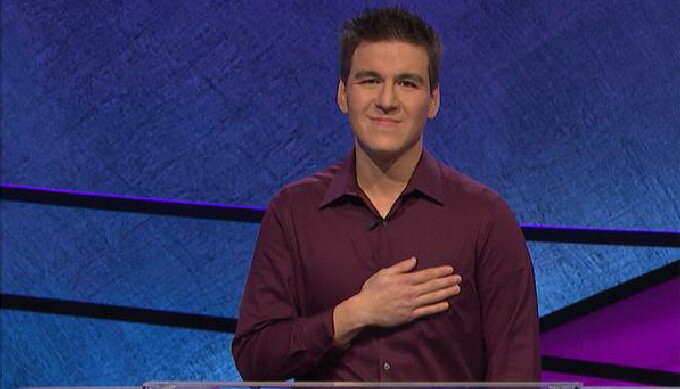 "Jeopardy!" Is Once Again Must-See TV.  At a time when everything about television has to be bigger and better and bolder and somehow edgy enough to try to stand out amid the chaos of it all, this decades-old, enduring and endearing basic game show – one that dares to educate viewers as its contestants compete for cash prizes – has once again risen to the top, offering more drama and excitement and entertainment than just about anything else.  The rapid advancement of James Holzhauer (pictured above) and his endurance as a seemingly unstoppable winner has been engaging on a level most scripted shows never achieve let alone maintain.  He hasn’t won more money yet than all-time champ Ken Jennings, but his per-episode winnings have set records.  Meanwhile, beloved host Alex Trebek continues to share his thoughts about his current cancer battle, speaking to viewers at home as if they are dear friends.  In this case, I believe they are.

“Gee Your Hair Smells Terrific!” Goes from Complimentary to Cringe-worthy.  With apologies to anyone who might be offended, every time I see Joe Biden I now think of the ubiquitous ‘70s-era commercials that featured people smelling each other’s hair and exclaiming, “Gee your hair smells terrific!” (the actual name of the product).  I seem to recall that some of them were strangers paying each other compliments.  Was Biden simply responding in a subconscious way to the power of advertising?  Isn't that the desired result of a great ad?  Maybe that campaign was more powerful than Madison Avenue thought. 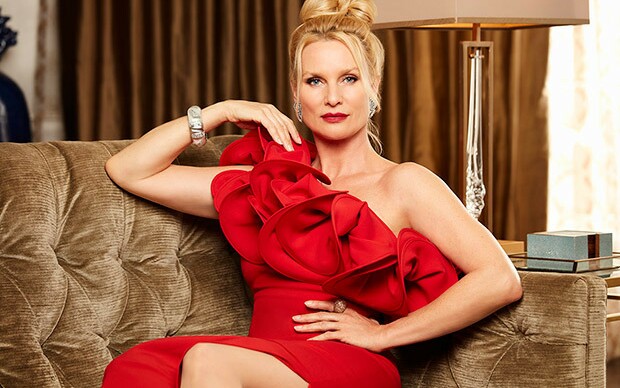 “Dynasty” Is on Fire.  Quietly doing its thing on Friday nights, The CW’s Dynasty in its second season has morphed from an awkward reworking of the original into a show so bat-sh*t crazy it is giving Now Apocalypse a run for its money.  I couldn’t believe what I was watching when Alexis’ long-lost son Adam, an evil bastard, shoved his mother face-first into a blazing fireplace, scarring her so badly that she required reconstructive surgery.  (This plot-scorcher was executed to accommodate the departure from the show of Nicolette Sheridan, pictured above, without losing her critical character.)  But that wasn’t enough!  Devious Adam then manipulated the plastic surgery team into giving Alexis the face of her nasty daughter Fallon (played to sublime snottiness by Elizabeth Gillies).  Not even the legendary Moldavian massacre can top that. 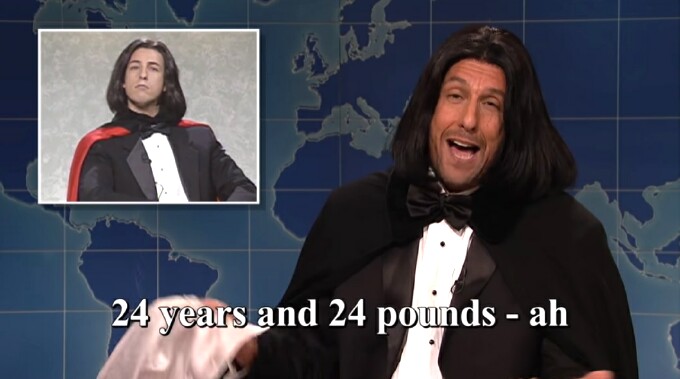 “Saturday Night Live” Revived Opera Man. How great was it to see Adam Sandler (accompanied by Chris Rock and Kristen Wiig) back on the SNL stage?  And how wonderful was it to have Opera Man back behind the Weekend Update desk, after "24 years and 24 pounds," as he sang about current events.  His best lyric:

Young or olda, Make no diffa,

“General Hospital” Star Max Gail Got His Emmy! At least some things in this crazy world are working out the way they should.  Remember, you read it here first!