No Bones About It: NBC's "Lincoln Rhyme" Is a Gutsy Crime Thriller 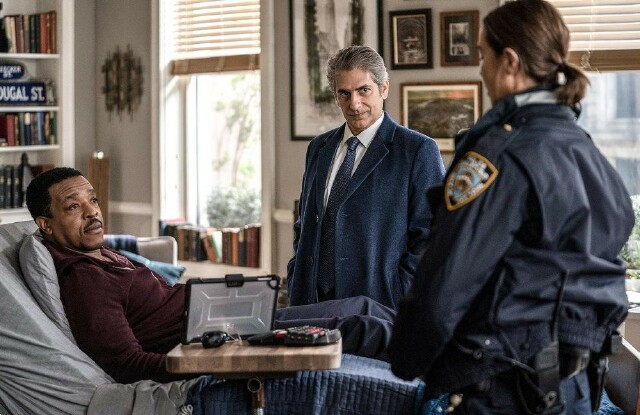 The last time I typed the words “Bone Collector” into anything, I was googling videos of Larry Williams -- a streetball legend who was just obliterating the ankles of his opponents with some of the sickest crossovers I’d ever seen.  This time around I’m doing it in reference to NBC’s reimagining of Jeffrey Deaver’s best-selling crime novel, which also spawned an acclaimed film of the same name back in ‘99, The Bone Collector.  NBC’s crack at this story, titled Lincoln Rhyme: Hunt for the Bone Collector, is definitely a fresher, more modern version of that classic thriller, but the differences go much further than that.  Created by series writers Mark Bianculli and VJ Boyd, and starring Arielle Kebbel as NYPD Officer Amelia Sachs, and Russell Hornsby as the titular character, this new series might just have the best parts of not only every version of itself, but also of some other classic tales of mystery.

One thing I liked right off the bat was the efficiency with which Lincoln got right down to business.  Within minutes, it was very clear who Lincoln was, what his general m.o. was, and who the B.C. was to him.  Lincoln was an active forensic criminologist, and while he was in pursuit of this peculiar perp, he was tricked by a booby-trapped walkway that caused the fall responsible for his injuries.  In the film, Lincoln seemed more beaten by his injury, at least initially, whereas in the TV show (or in the pilot, at least) he appears to have accepted it for the most part.  That’s not to say that I don’t think it bothers him, but I do think his primary focus in this adaptation is either revenge, catching “the one that got away,” or some combo of the two.  In the film, Rhyme was requesting assisted suicide right out of the gate.  Here?  Not so much.

At first I did find it to be an odd choice to reveal the B.C.’s identity as early as in the show’s announcement teaser, but after further consideration, I think I get it.  Lincoln is a bed-ridden Sherlock Holmes-type, and as such he would need regular opposition from someone with a Moriarty-like energy to compliment his own.  The B.C. appears to be that special someone, though I would’ve liked to see the initial three-episode arc end with the reveal of the B.C.’s identity (to us, not Rhyme) so that it felt like we also had to chase that answer ourselves for short while.  What actually happened still works, though.

Also, and I just thought about it, but if the show is called Lincoln Rhyme: Hunt for the Bone Collector, then they can’t ever actually find the B.C., right?  I mean, no Bone Collector, no hunt, so… unless this series changes titles or consciously decides to make a lot less sense, viewers should probably strap in for a perpetual case of metaphorical blue balls in the “catching the main bad guy” department.

That said, going back to the complimentary energies mentioned earlier, we have to address the reimagined Amelia, who’s a pretty perfect fit for Lincoln’s character, by the way.  She stands on her own as a character and could probably support a series all on her own, though the missing “there, but not there” presence of an experienced superior probably would have been missed.  That particular element of this series packs a punch.  Officer Sachs is undoubtedly all the heart in this series rolled into one person, and if the series featured Rhymes alone, we’d feel her absence in a big way as well.

The usual trope in a show like this would be thatOdd Couple-y, sort of “opposites attract” kind of scenario.  Thankfully, the writers on this series have created characters that feel like actual people and not two-dimensional imitations of such. Plus, a lot’s happening.  Even if the characters weren’t as well-rounded as they are, I’d argue we that probably wouldn’t notice the unforgivable stuff.  There’d never be any real time to focus on it, because with this Bone Collector guy running around some poor sap is always right about to die anyway.

Besides the source material from which it came, Lincoln clearly is influenced by other characters of this type.  People like Dr. House from that show House, or Sherlock Holmes from that show Sherlock, or any other brainy, damaged, kind of pompous, genius-type investigator for that matter.  They’ve all got the same quirks. Dr. House -- or even that amazing kid from The Good Doctor (who’s not necessarily pompous, so much as he has an issue with social cues) -- and  Lincoln Rhyme both “see” the clue-related information they’re interpreting in their minds.  That’s for the benefit of the viewer, of course, but also because Rhyme fits that type.  Sherlock Holmes, who’s even referenced in the pilot episode as one of Lincoln’s early inspirations, has a penchant for eyeing the details and cross-referencing them with an impossibly intimate and detailed knowledge of the local area’s history.  Lincoln is exactly the same way.

As far as tone goes, this series rides the same line as crime shows like SVU.  The things that are supposed to disturb you, do, and the rest is clue-hunting or character development.  It is a procedural, so I’d probably expect there to be a bunch of filler cases that fall right into the very specific wheelhouse of Rhyme and Sachs’ combined skill sets, which will be entertaining as hell regardless because, as it turns out, this show’s pretty damn fun to watch (even if we’ll probably never catch the main guy).

Besides being telecast on NBC, it’s also simultaneously streaming on Hulu, so I’ll let a few pile up before diving back in, just so I don’t have to wait between episodes, because this show is so well constructed that weekly waits would be unbearable.