Norman Lear at TCA: Those Were the Days 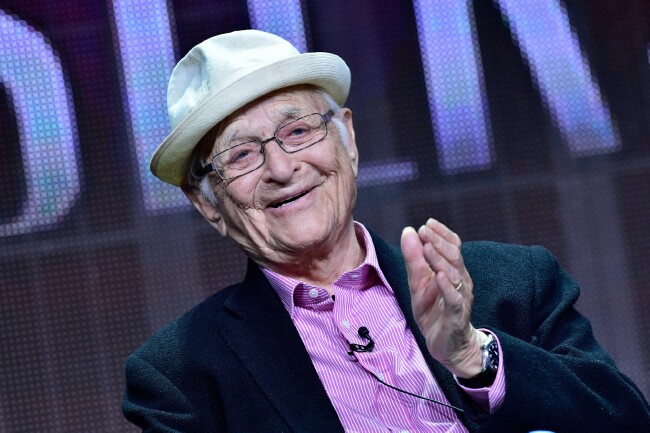 With his iconic sitcoms on CBS in the Seventies, plus “Sanford and Son” on NBC and “Mary Hartman, Mary Hartman” in syndication (also in that decade), Norman Lear arguably did more to change television programming and the national conversation than any producer before or since. The impact of his work continues to be felt to this day; in my opinion it has never been equaled and is much missed. Imagine if we had a top-rated comedy like “All in the Family” on television right now that was not afraid to take on tough topical issues of the moment such as the rise in racism, the crippling costs of health care for the working class and the impending tragi-comedy of the 2016 presidential election. Imagine one or more shows being watched by millions of people every week that didn’t preach and were free of lazy snark and encouraged families and friends to look beyond themselves and try to understand other people – allowing all of us to laugh at ourselves in the process. Where are Archie Bunker, Edith Bunker, Mike Stivic, George Jefferson, Lionel Jefferson, Maude Findlay, Anne Romano, Florida Evans and Fred Sanford when we need them?

Lear, who recently turned 93 and remains remarkably sharp and funny, stopped by the Summer 2015 Television Critics Association tour last weekend to talk about the upcoming edition of PBS’ “American Masters” (set to debut in 2016) that will look back on his extraordinary career. And he isn't done yet: Lear revealed during his session that he is developing an all-Hispanic version of “One Day at a Time,” his long-running sitcom about a divorced mother raising two daughters.

Listening to Lear, who enthralled dozens of critics with his comments on a variety of topics, from television to politics to survival, as well as his stories about his storied past, I couldn’t help but wonder why broadcast networks don’t bring legends like him to press tours for formal or informal sessions (or, for that matter, why broadcast and basic cable networks alike aren’t beating down his door looking for new material). That might be one way for the broadcasters to distinguish their days at TCAs from those of more talked about premium cable and basic cable networks, not to mention the streaming services that are slowly gobbling up prime TCA tour space to showcase their programming. (Netflix opened this tour with a full day of panels. Since then Amazon appeared for a half-day to promote multiple shows and Crackle stopped by for an hour with the cast of its first drama series, “The Art of More.”  Hulu on Sunday will present several panels, followed by a party with its talent.)

There is a lot of top talent flocking to those networks and streaming services, from Martin Scorsese on HBO to Woody Allen on Amazon. But there isn’t a tele-visionary in the mix who comes close to Lear. That was made clear all over again when Lear met the press.

Lear was asked why with very few exceptions television writers and producers can’t seem to come up with topical sitcoms in which characters swap different points of view about events and issues in the world today, as so many of them did on so many of his shows. Is it because they lack experience or are simply out of touch with life beyond the better neighborhoods in Los Angeles?

Asked how he feels about the current political situation, Lear replied, “It’s so hard.  Everybody knows me to be a progressive or a liberal or lefty or whatever. I think of myself, by the way, as a bleeding heart conservative. You will not fuck with my Bill of Rights, my Constitution, my guarantees of political justice for all. But does my heart bleed for those who need help and aren’t getting the justice that the country promises them and the equal opportunity the country promises? Yes. I’m a bleeding heart, but I think myself to be a total social conservative. The people who are running just don’t seem to have America on their minds, not the America I think about.

“You know, when I was a kid we were in love with America,” he continued. “As early as I can remember, there was a civics class in my public school. And I was in love with those things that guaranteed freedom before I learned that there were people who hated me because I was Jewish. I had a Bill of Rights and a Constitution, those words out of the Declaration that protected me. And I knew about that because we had civics in class. We don’t have that much in the country anymore. So before World War II or, say, shortly after, we were in love with America because we understood what it was about and that’s what we were in love with. I believe everybody’s patriotic today. Everybody loves America. I’d like to go back to civics lessons.”

It has been more than 20 years since Lear created a sitcom (the very short-lived 1994 effort “704 Hauser,” set in the house Archie Bunker and his family once lived in). “Do you feel up to doing another one if anyone will dare take you on and let you speak your mind?” a critic asked.

“Yes, yes, yes,” Lear excitedly answered. “We’re talking about doing a Latina version of ‘One Day at a Time.’ Not in Spanish; in English, but a Latino version. That could happen.

“The Bonnie Franklin role is Latina,” Lear elaborated. “The kids may be a boy and a girl instead of two girls. I want her to have a mother so there are three generations of Latina women, and I just loved the idea because I don’t see enough of that representation on the air anyplace. And I don’t mean to say it doesn’t exist. I said I don’t see it anyplace. Maybe it does. But there isn’t enough of it, and I think it’s a rich idea, so I’m excited.”

“What else do you want to accomplish?” another critic asked.

“I want to have a great dinner this evening,” Lear replied, inciting much laughter in the room. But he was being serious. "I want to wake up feeling as I usually do, loving the day. I’m looking out at you. You know, it took me 93 years ... to get here. But it took you every split second of each of your lives to get here for me. So I’m way ahead of you. But that’s the fact, you know. It took all your lives to get here, so this moment is the moment. Even this we get to experience. I can’t tell you what nourishment I get from understanding that.

“I’ve learned introspectively how much each of us matters and how little we understand how much we matter in the course of our day,” he continued. “I’m impressed with the way we all affect each other in small ways and the good we do in terms of relationships that would otherwise seem meaningless, or certainly easy to overlook, that we don’t take credit for, each of us, all of us. If I could make anything clear, it would be that.”