Not for the Squeamish! Man Impaled by Shovel Handle This Friday on Discovery Fit and Health – Ed Martin 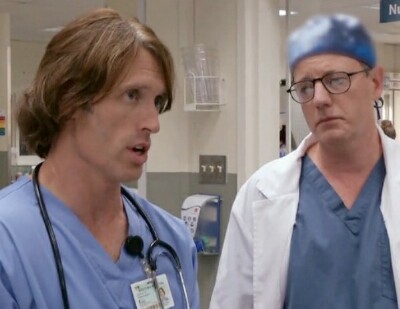 One never knows what the morning e-mail will bring. Consider this missive that arrived today from a publicist at Discovery Fit & Health with the following message in its subject line:

“Man with a Shovel Impalement in His Perineum on the 100th Episode of ‘Untold Stories of the ER’ Airs This Friday.”

Should you care, it came with a promotional link to the following clip (just click on the image below). It is certainly safe for work, but not necessarily for those with weak stomachs. 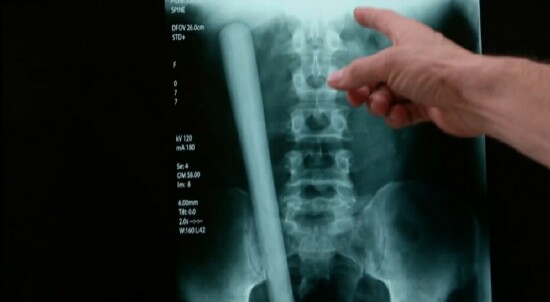 I defy any critic or reporter not to open an e-mail with that kind of pitch – and that’s saying a lot given the fact that journalists (like everyone else) typically receive hundreds of e-mails every day and look for reasons to not open many of them. So kudos to the publicity team at Discovery Fit & Health for understanding how to get immediate attention. Now that is effective publicity work!

The excitement surrounding the unfortunate fellow referenced in the subject line, who indeed took a tumble and suffered the unimaginable agony of having approximately two feet of shovel handle rip into his groin area, is tied to the premiere this Friday of the 100th episode of “Untold Stories,” a "reality" series (with staged reenactments) that I understand to frequently be so shocking and repulsive that it is for many impossible to resist. Even though it has enjoyed a run of eight seasons and is about to begin its’ ninth, I somehow have managed never to watch an episode of this show, and likely won’t start now.

That said, if there were footage of this man’s actual accident on the Internet it would have probably gone viral by now and/or been featured in a segment of Comedy Central’s irresistible “Tosh.0,” in which case I would probably be familiar with it. (I have seen much worse on “Tosh” than a man impaled by a shovel handle. Daniel Tosh and his team have the supernatural ability to make even the most horrific events seem funny.)

As expected, certain aspects of the above clip are pretty disturbing. (You have been warned.) But that’s life in the emergency room of almost any hospital. If you have a friend or loved one who works in one just ask. He or she will tell you stories that will curl your hair or make it turn white or maybe make it fall out. (A doctor friend of mine once reminisced about two men who tried to trim hedges by lifting a lawn mower over their heads and later came to the ER with a baggie containing 16 fingers.)

I guess that’s the appeal of “Untold Stories of the ER.” Just look at these images from episodes that debuted last summer:

In the first, a man has a chainsaw in his neck. 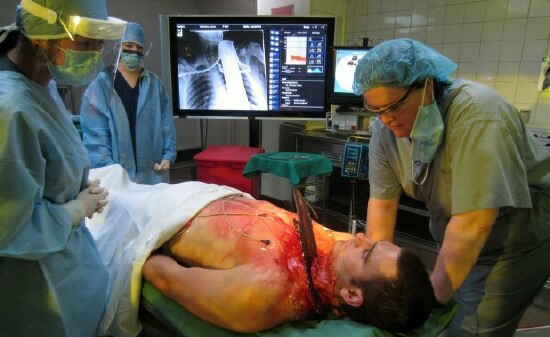 In the second, a couple has been impaled by a spike of some kind. (Talk about togetherness.) 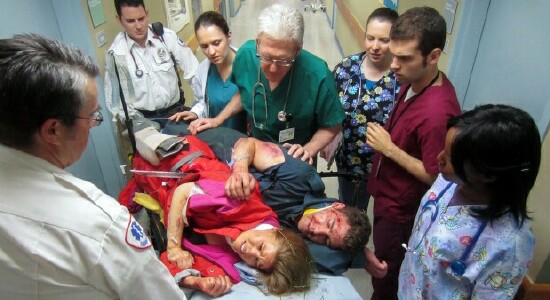 And here is a preview of another story featured in this Friday’s episode as detailed in the press release: “Dr. Holmes [one of the many brave ER surgeons featured on the show] has a patient with unexplained internal bleeding – from both ends. He discovers that a parasitic infection is making his patient ill and he’s sure it’s from something the patient ate. But with his frat buddies surrounding him and sworn to secrecy, will the patient reveal what they all ingested as part of a fraternity pledge before someone else gets sick?”

Why stop there? The release also offers tantalizing teases of stories from upcoming episodes: “A man run over by a boat; a woman whose finger is stuck in a blender; a slew of naked, hallucinating teenagers; a patient struggling to breathe because her face is covered in plaster from an art project gone wrong; a man poisoned with antifreeze by his girlfriend, and a variety of amusing, intoxicated patients.”

Given the cavalcade of shocking scenarios that define dozens of today’s most popular scripted dramas and observational reality series (including those with reenactments), these “untold” stories of emergency room traumas might strike some people as rather common. I’m certain they were way more startling when the series began in 2004.

Still, in the ever-more-intense game of Can You Top This in which such shows willingly or unwillingly find themselves engaged, anything that propels one above the rest, however briefly, is worth noting. Is it all very alarming and somewhat depressing? Of course. But don’t blame the messengers (ie: publicists) or the journalists who respond. Remember, shows with shocking content, whether scripted or unscripted (and with or without reenactments), wouldn’t continue to thrive if there wasn’t a significant audience for them. The question is, how much further can they go?