Notes on "New Year's Rockin' Eve": Where Was the Hip Hop? 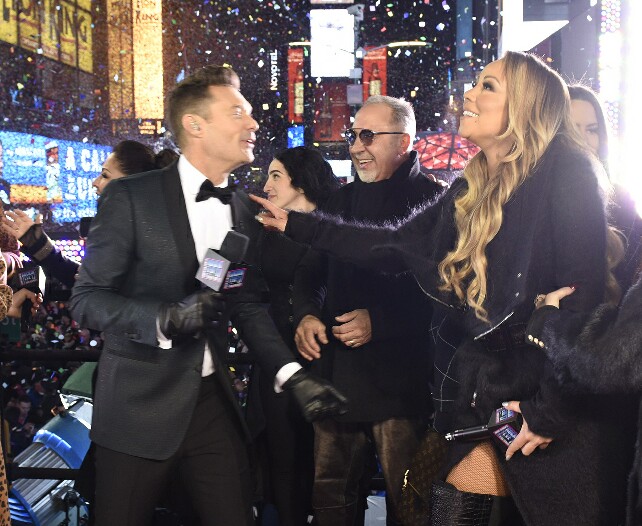 So here we are, only a few hours into the New Year at the time I’m writing this, and honestly, this universally accepted symbol of fresh starts and new beginnings could not have come any sooner.  As with many a major holiday, this one has a tradition of being a nationally televised event, bookended with live musical performances and featuring, of course, the famous midnight countdown. While many people found themselves at various parties and social events, this year I took the opportunity to bring in 2017 the way a true American should: in front of a TV. I put the entertainment destiny of my night in the experienced hands of Ryan Seacrest and Co. during ABC's Dick Clark’s New Year’s Rockin' Eve 2017 and, in the way only live television can, it did not disappoint.

As per usual, Ryan Seacrest and Jenny McCarthy were hosting in Times Square and Fergie was holding it down on the West Coast. There were screaming crowds, flashing lights and a couple of Super Bowl-level commercials, but the main event (besides the ball dropping) was the musical entertainment. This year’s lineup was one that would easily put Trump’s Inauguration lineup to shame, although that’s not really saying much considering one could probably say the same of my four-year-old’s birthday entertainment (and we did that at Chuck E Cheese). #RockinEve had a killer lineup of 2016 chart-topping artists that included Demi Lovato, Panic! at the Disco, Jason Derulo, Mike Posner, Shawn Mendes, John Legend, Bebe Rexha, Fifth Harmony, Alessia Cara, DNCE and – already most famously -- Mariah Carey. 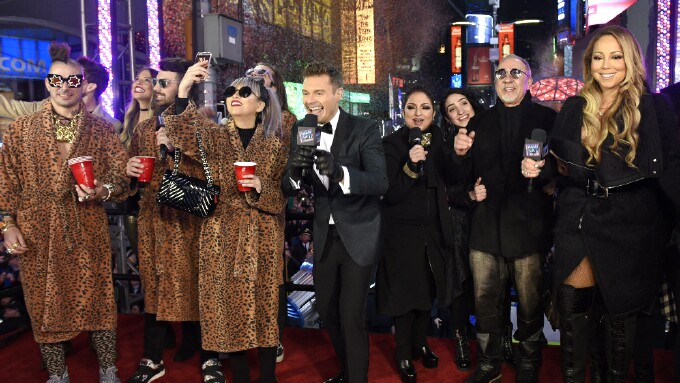 Most of the artists were flawless and professional, and with the help of the uber-talented crews and camera people that never get mentioned, they succeeded in putting on a pretty great show. But I do have a couple of … notes. Jason Derulo, for instance, just didn’t do it for me. For someone who’s been doing this for a while, his dancing didn’t seem to have that precision that comes with having been in the game this long. As far as his vocals, one could argue that he may have achieved a higher level of audio quality had he not been outside (in New Orleans), but then again, every Times Square stage performer was outside and they all (almost) sounded just fine.

Panic! at the Disco pleasantly surprised thousands of long-time fans (including me) by closing their two-song set with a short, but worth it, performance of their 2006 classic "I Write Sins Not Tragedies." Fifth Harmony also surprised their fans by showing up with the group intact after announcing in mid-December that Camila Cabello planned to pursue a solo career and would no longer be performing with them. In an open letter the remaining four posted on Twitter, they revealed that December 18 was supposed to be Camila’s last performance with the group, but obviously this was not the case, because they were all present, primped and performing together less than 24 hours ago.

Fergie, who performed as well as hosted, also did a two-song set, the clubbier of the two (and my favorite) being “M.I.L.F. $” (which is pronounced “Milf Money” for all you squares out there). It was a short but fairly dope performance that, upon seeing it, made me realize exactly how little hip hop was represented this year. Sure, Ty Dollar Sign and Kid Ink performed with Fifth Harmony, but they were both "featured" and didn’t do any songs of their own. And yes, Flo Rida was there, but anybody who really listens to hip hop knows that Flo Rida doesn’t count.

Now I know there’s never really a huge hip hop presence at these things, but with artists like Kendrick Lamar, Chance the Rapper, Childish Gambino and Drake still drawing breath on this planet it seems weird that at least one of them, or any other artists like them, weren’t called upon to rock the night away with Seacrest and the gang.

As for the “biggest star” of the night, Mariah Carey went up in flames so fast there are already reaction videos on YouTube. Like, right now. Apparently, the source of her problems was a nonfunctioning earpiece that prevented her from hearing her backing tracks. Surrounded by literally millions of screaming people and unable to hear anything while being broadcast live to the whole wide world, Carey did what any seasoned performer does in that scenario: Keep Calm and Wing It.

Once she began singing the classic "Auld Lang Syne" it became clear that she wasn’t in sync with the background music. She seemed to have the same issue when she attempted to sing her classic hit "Emotion"; after one or two attempts to power through it, she gave up and moved on to "We Belong Together." Once again, she had the exact same problem, but throughout the entire performance she never seemed to lose her cool. On stage, in between nonchalant shrugs, she did say, “Get these monitors on, please” as well as announce that “We’re missing some of the vocals, but it is what it is … I’m gonna let the audience sing. We didn’t have a sound check for this New Year’s baby. It is what it is.”

After that, Twitter basically exploded with accusations that she was caught lip syncing because her voice could be heard on the out-of-sync tracks (although I think they were meant for her to harmonize with). Many claim she was 2016’s final victim, some are calling it her “Milli Vanilli Moment” and some are coming to her defense. My favorite tweet in response to this amazing moment of live TV gold was this one:

So, what did Mariah have to say about all this? 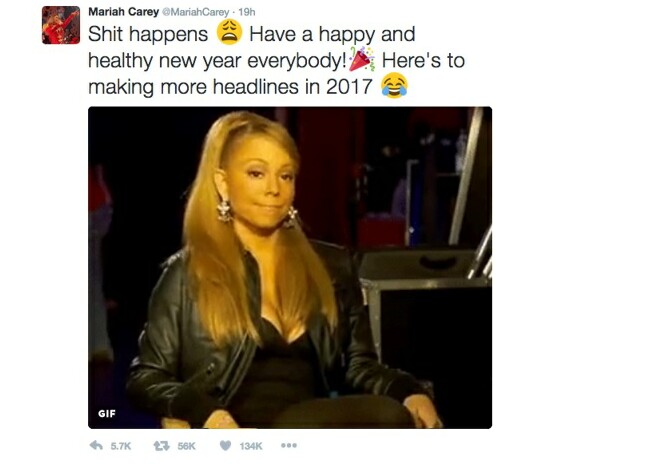