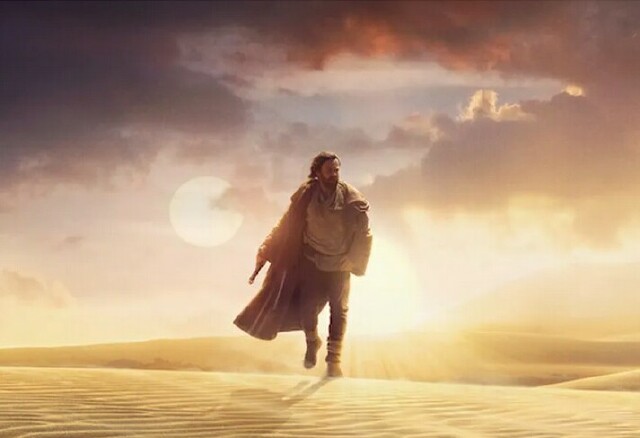 The Star Wars universe, not unlike the Marvel universe -- and the actual universe, for that matter -- is an ever-expanding behemoth overflowing with countless epic stories that are just dying to be told. Yes, television properties like The Clone Wars and Rebels have been exploring various aspects of and characters in the #Vaderverse for over a decade now, but it wasn't until the live action TV seal was finally broken by The Mandalorian that we really began to see what was truly possible outside the realm of feature film productions. As great as it was learning more about Mando and Grogu, or seeing what Boba Fett was up to after crawling out of that sarlac pit, we all know the big money tends to follow the Skywalkers. That family's saga has been the meat and potatoes behind this whole thing since the beginning, way back in 1977, and now, not unlike the way The Clone Wars filled in more than a few gaps between films, the long-awaited Obi-Wan Kenobi on Disney+ is doing the same -- and it's doing so in spectacular fashion.

Between the movies, novels, comics, video games and most importantly the wave of new TV shows, the world is getting more than its fair share of lightsaber-centric entertainment. This time around, we're focusing on none other than Ben, aka Obi-Wan Kenobi. Ewan McGregor, who began his Star Wars career as young Obi-Wan in Star Wars: Episode I – The Phantom Menace, has reprised his iconic role as one of the most influential characters in the entire #Vaderverse, although at this point, he's not "being influential" so much as "hiding in the desert." Accompanying McGregor is his old castmate Hayden Christensen, who reprises his role as, Mr. "I Hate Sand" himself, Anakin Skywalker -- aka Darth Vader. There are a number of other role reprisals here as well, but we'll get to those.

Obi-Wan Kenobi is set 10 years after the dramatic events of Star Wars: Episode III – Revenge of the Sith, in which we witnessed Order 66 take place (the mass execution of all Jedis), Obi-Wan's Jedi apprentice Anakin Skywalker fall to the dark side and become Darth Vader, and the subsequent birth of Vader's children, Luke and Leia, which claimed the life of their mother, Padme. Being that Anakin was unaware of their existence, the twins were split up and hidden on different planets -- Leia with a royal family on the opulent planet of Alderaan, and Luke with his aunt and uncle on a moisture farm on the desert planet Tattooine. (He definitely got the short end of the stick.) Obi-Wan, feeling responsible in some ways, vows to watch over Luke until he too is of age to be trained in the ways of the force.

Now, while The Mandalorian creator Jon Favreau and Lucasfilm Executive Creative Director Dave Filoni (the dude who created and wrote almost every single animated Star Wars TV show) aren't a part of this show's production in any official way, the effects of their impact on the franchise as a whole is felt throughout. Favreau's choice to ground these alien beings and cultures in the gritty, almost real-world aspects of existence is one of the key techniques that's helped sell viewers on the stakes of some of the more serious situations, which can be difficult when there are a bunch of laser guns and spaceships all over the place.

Like Favreau, Filoni is a real fan (maybe the realest of us all) and uses his knack for finding the true heart and meaning behind the relationships in this classic franchise to help guide newer properties in the right narrative direction. In that sense, The Mandalorian set a serious example, and shows like The Book of Boba Fett and now Obi-Wan Kenobi have followed suit -- creating living and realistic dramatic backdrops for the new aspects of this widely cherished space opera to play out against.

In a more direct way, the impact of those aforementioned men can be felt through the presence of Kenobi series director Deborah Chow, who was also a director on The Mandalorian.

As far as the casting of Obi-Wan Kenobi goes, this was probably the ideal outcome. Every role that could be reprised has been. Alongside McGregor and Christensen are Joel Edgerton and Bonnie Piesse as Luke's Uncle Owen and Aunt Beru, respectively. Also back is the man whose voice helped make Darth Vader so iconic in the first place, James Earl Jones. New additions to the Star Wars family include Rupert Friend, Sung Kang (of the Fast and Furious saga) and Moses Ingram. They play three Inquisitors (Jedi hunters) named Grand Inquisitior, Fifth Brother and Reva Sevander (aka Third Sister), respectively.

Not too shockingly, the score for Obi-Wan Kenobi is the work of none other than John Williams, the god behind the iconic Star Wars themes that we've all come to know and love over the years. It, too, is littered with melodies and chord progressions reminiscent of the original films, while still maintaining an identity of its own.

The biggest thing for me when it comes to this show, though, is its tone. Obi-Wan has been through some shit, and it shows. He once scoffed at blasters as being "so uncivilized," yet now he whips his out at a moment's notice, like a detective who got too close fighting off bad guys in a dark alley. It makes sense, seeing as the world has been a pretty uncivilized place since Order 66 was executed. We're three episodes in, and since then we've seen Obi-Wan, now going by "Ben," recover his lightsaber (which he'd buried in the desert), meet a young Leia (Vivien Lyra Blair) for the first time since her birth, and find out that, yes, Anakin Skywalker is still alive.

The surge of nerd energy that flooded my body during what will undoubtedly become some of most newly iconic moments in Star Wars history is incalculable, and I anticipate plenty more instances of fanboy overload before this six-part limited series concludes.