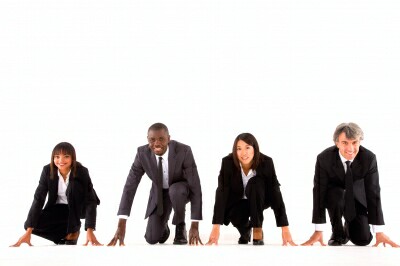 Nielsen’s TV audience measurement system has proven itself invulnerable to competition for the better part of a century. What has changed today that makes competition more likely?

Fundamentally, Nielsen itself has changed. Those changes were discussed in Part 2.

The competition has also changed. Those changes were discussed in Part 3and Part 4.

In the final installments of this series of posts we will look to the possible future and make some suggestions about what the industry can do to get the most value out of its U.S. TV ratings services. First some predictions about the directions in which the players might be going — what they have already announced plus some suppositions.

We were amused to see this slide in a recent Forrester presentation, showing some of the players moving in to attack position on Nielsen: 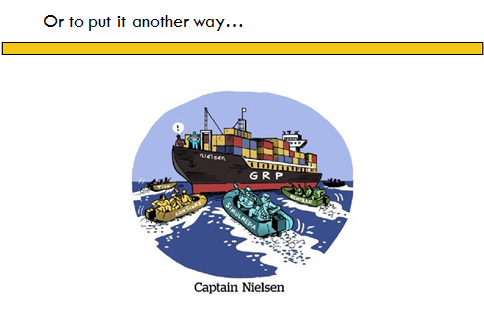 Presumably the dark boat at far right with unseen label is Symphony Advanced Media, since the Forrester report contained extensive coverage on that company as well as TRA and the others covered here. Forrester correctly identified all the other players besides SymphonyAM that figure into the future of U.S. TV ratings. Here’s our own slide summarizing where things stand today in the faceoff between the Nielsen battleship and the circling PT boats. The slide’s thumbnails of each player sum up what is widely known about each one. 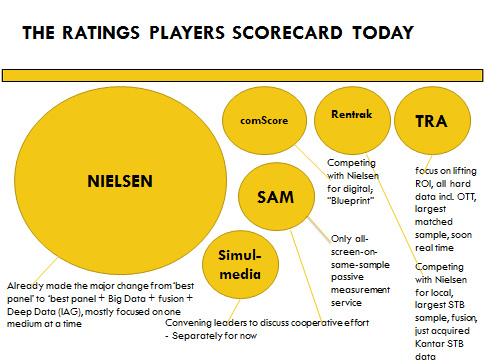 Nielsen is the incumbent monopoly currency but is weakening its product advantage with fusion. comScore has been eroding Nielsen for some time but only on the digital front despite significant development of its own TV data using set-top box and PPM. Rentrak has been nibbling away at Nielsen in local measurement and TRA has been positioned as a supplement rather than a replacement for Nielsen. Symphony Advanced Media and Simulmedia have not announced their intentions with regard to Nielsen, other than the fact that Simulmedia is a customer of Nielsen’s.

In the next post, our own assessment of what each of these companies does that is the most valuable.