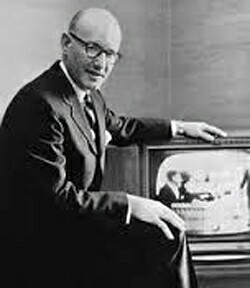 New competition in the business of U.S. television ratings that was never before possible is now increasingly likely. To understand why, a review of the history of television audience measurement should prove helpful.

Nielsen has proven itself invulnerable to competition for the better part of a century. Art Nielsen Sr. had founded his company on the premise that people can’t give you the right answers; rather, you have to measure their behavior passively if you want the right answers. (The 21-year-old me was inspired by that to three years later publish the idea of the portable passive peoplemeter.) Art’s store audits, being passive, were more accurate than asking people what they bought. Nielsen Food & Drug Index became a monopoly.

In 1935 Art bought the Claude Everett Hooper Audimeter patent for metering the radio audience, for $1 million. Art went on to create a TV version, too. That was his second monopoly. Initially it just measured the national TV audience.

Around 1950, Coffin, Cooper and Clay combined their separate regional diary operations to become the American Research Bureau (ARB), today known as Nielsen Audio. In between they were known as Arbitron. ARB for a while was the impregnable local TV research service, until Nielsen decided to step away from its core belief of passive measurement to compete with ARB in the diary measurement of the 200+ local markets of U.S. television. By 1965 when I got to ARB it was going out of business as a result of the unstoppable Nielsen juggernaut, featuring 100% keypunch verification and closed-end diaries and contractual benefits for folding local into the national monopoly service.

(Had I known it was going out of business, I wouldn’t have taken the job -- which would have been the biggest mistake of my career. But that’s another story.)

It wasn’t until the early ‘90s that Arbitron finally left the local TV measurement field to Nielsen. Their Scan America operation was widely considered a long-term contender to come back into TV, but Steve Morris, who ran Arbitron, was well aware of Nielsen’s strength having seen the brief flickering of AGB, the best of European competition beaten back, along with Roger Percy’s passive peoplemeter (which Art Sr. probably acquired, in some alternate universe). Steve never intended to attack Nielsen, as he always saw Nielsen as the best exit for Arbitron.

Steve then developed the PPM, or portable passive peoplemeter. (I helped Rick Aurichio, his predecessor, in its development, and then Steve.) It was the conceptual father to all of today’s audience measurement mobile apps, such as Symphony Advanced Media, the leader in that field.

What has changed today that makes competition more likely? The answer is in next week’s post, which brings the backstory up to date and shows the driving roots of the future.