Of Beer, Chocolate and the Commoditization of ad:tech - Brian Wieser 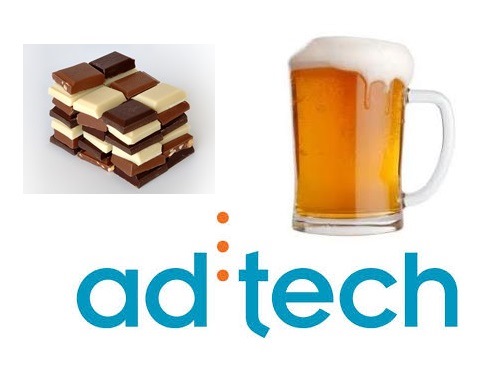 Occasionally our perceptions of the products we really like are shattered. How many of us have enjoyed something we thought was unique or scarce only to later find out that some or all of its core aspects were actually comprised of commodities available in a myriad of different forms?

REPORT INCLUDING DISCLOSURES CAN BE FOUND HERE: Madison and Wall 4-4-14.pdf

On trips to Belgium and France several years ago, we noticed that the plain bars of chocolate sold by chocolatiers tasted oddly similar within each country. Upon further inquiry we learned that there tend to be dominant manufacturers of couverture (the blocks of chocolate from which related confections are made) in each country, such as Callebaut in Belgium and Valrohna in France. And then just recently, over the course of several brewery tours we learned that virtually every brewer in the United States – whether a micro-brewer or Anheuser-Busch – relies upon one of two producers of yeast for this core ingredient.

It shouldn't have been surprising given what should be self-evident about economies of scale in mature industries. Certain things are hard to do or expensive unless a significant volume of activity is involved. Couverture requires the sourcing, transporting and roasting of cacao beans followed by an actual manufacturing process, for instance. But ultimately, when a critical product input is provided at a low cost to a more fragmented group of companies, it allows them to offload serious capital expenditures and difficult-to-replicate expertise. Instead, companies can focus their efforts on all of the other activities required to grow a business. A chocolatier or micro-brewery will instead compete on attributes such as product's final form, blends with other ingredients, branding and marketing or distribution.

Ad:tech, as it turns out, isn't necessarily much different. The thing that many will view as difficult – the underlying technology of ad:tech – can, in fact, be outsourced. For much of the industry involved in selling real-time ad trading products (including companies which compete with each other) Iponweb and AppNexus provide the critical ingredient of technology.

The little-known Iponweb, with most of its engineering talent based in Moscow, initially produced the technology behind Right Media (one of the first exchanges, now owned by Yahoo). From there the company expanded significantly: the company reportedly powers two of the 10 largest DSPs and two of the 10 largest SSPs in the United States and has also developed agency trading desks, exchanges and DMPs for agencies, brand advertisers, large publishers and data companies. It has a similar presence in Europe and Japan, developing technology for 20% of the approximately 250 companies selling real-time ad trading products. That so many companies have emerged in this sector is less surprising when considering that Iponweb can develop a mature solution for between a few hundred thousand and a few million dollars; further, it can maintain operations after the product has launched. With a different overall business model, AppNexus (whose CEO and co-founder, incidentally, was CTO of Right Media) is providing many similar capabilities to the eco-system. Among the company's offerings, it has developed white labelled solutions for companies including Microsoft, Millennial Media and Responsys.

These approaches and proven track records means that technology is less likely to be a material differentiator between companies involved in ad:tech. Better products won't necessarily win if literally anyone with a few hundred thousand dollars can quickly enter (or pivot) and compete in the business. Instead, when we want to think about who will be the industry's leaders, we have to consider that business models, product features, trade marketing and industry relationships will matter much, much more. These are the characteristics around emerging ad:tech companies will live and die on, much as the makers of chocolate and beer differentiate themselves on characteristics other than their core ingredients, too.

The lessons those other industries have gone through may not be wholly applicable, but they do highlight that sometimes the thing we think we are buying mostly originated with someone else and might be nearly identical elsewhere. This also means that in divining the future of ad:tech - as with beer and chocolate - we can mostly forget about technology and instead concentrate on the industry's myriad of flavors instead.

Brian Wieser is a Senior Analyst at Pivotal Research Group, where he covers securities which are