Talking the Talk On ABC's "black-ish" 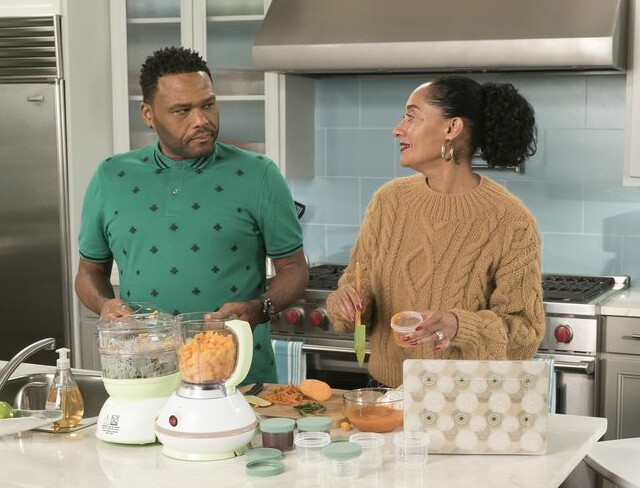 “Bow Knows” isn’t just a clever play on the title of the “Bo Knows” ad campaign starring pro athlete Bo Jackson that Nike ran in 1989; it’s also the title of the most recent episode of the hit ABC sitcom black-ish.  The story found advertising executive Dre (Anthony Anderson, pictured top left) tasked with heading a campaign that brings awareness to “The Talk,” a real-life short film released by Procter & Gamble last year.  "The Talk" refers to an important conversation black parents have with their children to prepare them for the racial biases of the world.  Naturally, Dre sees this as an opportunity to educate his white co-workers (without the help of his African American colleague Charlie, who was “at a funeral” this time around).

What resonated with me was the idea that “The Talk” is an actual concept that people have identified and actively take part in.  That might just sound like me being oblivious to the obvious, but hear me out.  If growing up both black and Latino has taught me anything, it’s that one’s life experience can vary drastically based solely on the hue of one’s skin.  Yes, economics are a symptom of this rule at work -- which is why in less brown, more affluent neighborhoods all the laundromats turn into dry cleaners, liquor stores into wine and spirits shops, bodegas into kosher delis and Compare Foods into Whole Foods -- but the root of the issue is still social.

These situations, personal experiences and interactions with pop culture were my main clue that something was a little different for me than it was for kids who looked different. Although there was never an official sit-down-and-have-"The Talk" moment, my mother was always reminding my brothers and I that being black meant having to be on our toes.  It wasn’t as blunt as Dre’s mom saying “America hates you” all the time, but it didn’t feel like America liked us any more for not being white.

The importance of this conversation in both white and black homes isn’t lost on Dre, either.  “It makes my kids’ lives easier if you’re telling your kids the same stuff, too,” he informs his boss and co-workers in the Stevens and Lido conference room.  Mr. Stevens (Peter Mackenzie), as usual, doesn’t get it initially, but Dre still makes a great point.  Sure, kids can be shitty, but they’re not innately racist.  Prejudice is taught, most evidenced by the fact that they usually don’t even register differences in skin color until someone points them out.

The focal point of putting the Procter & Gamble campaign in the episode -- which as reported in Variety is part of a real-life “ad pact” P&G struck with the ad sales people at Disney|ABC to promote its “The Talk” video on black-ish -- is that finding common ground can promote harmony.  That's a conclusion Dre manages to help his co-workers reach by episode’s end.

Meanwhile, in an interesting turn, Rainbow (Tracee Ellis Ross, pictured top right) discovers the opposite to be true, ultimately realizing that finding common ground with some people is an impossibility.  With a newborn in tow for the fifth time, this time during the social media age, Bow discovers an online support group for mothers.  She submits to the perceived collective knowledge of the group, even implementing screen time restrictions on her tech-addicted children.  All is well until she posts a favorable opinion about vaccinations.  Like sharks in blood-infested waters, her capricious online “friends” quickly turn on her.  As a doctor and experienced mother she knows she’s right, and in a very Dre-esque move she attempts to aggressively re-educate her peers. This does not work out.

Ironically, she spends the episode actively complaining that husband Dre must learn to listen, but fails to take her own advice when dealing with the group.  Normally Dre would barrel through mistake after mistake until finally learning something by episode’s end. Instead, it’s  Bow’s turn this time around.  Dre actually follows his wife’s advice immediately, allowing his whole situation with “The Talk” to work itself out.  Bow, on the other hand, basically goes nuts until she tuckers herself out and moves on.  In a couple with such a specific dynamic, it was fun to see them switch it up.

black-ish, which has built a reputation for successfully merging black-related history and education with social commentary and relatable comedy, continued to fly right with this episode.  The ease with which the show seems to navigate the murkiest of waters is a testament to the strength of its writers’ room.  Even with Charlie missing and Zoe off at college (#grown-ish), no one missed a beat.