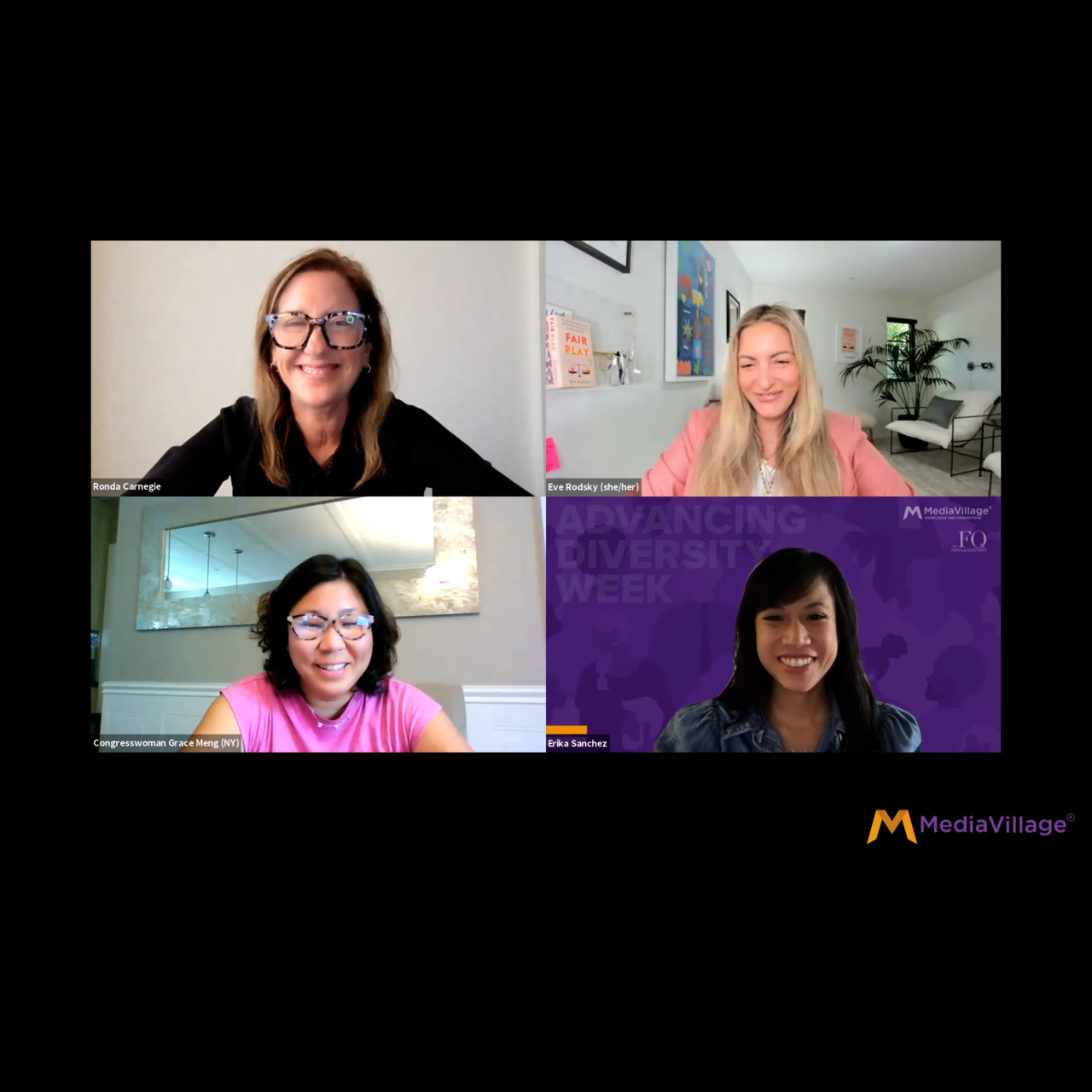 "I don't have to tell all of you how difficult it's been for women, especially moms, during this past year and a half. I have help and resources, and it was one of the hardest years of my life, working mainly from home, watching my kids. My job was redefined and transformed during the pandemic as New York and Queens were the epicenter of the epicenter. We heard from so many working families crying out for help," shared Congresswoman Grace Meng of the 6th District in Queens, New York, during the Advancing Diversity Week panel "Gender Rebalancing." (You can watch the entire panel discussion in the video above.)

Meng and Eve Rodsky, New York Times best-selling author of Fair Play, engaged in a conversation with Ronda Carnegie, Chief Innovation Officer at The Female Quotient, and were candid about how it took a global pandemic to bring caregiving and mental health crises to the forefront.

"What keeps me up at night is that in America 70% of our one percent --the people who make our decisions in government and the workplace --are white men with stay-at-home wives," said Rodsky. "So that lived experience is the lived experience of our leadership. They're making policies for the rest of us that don't work for the rest of us. We need to parent out loud. We need to have flexibility over our schedules; decide how we work and when we work."

Rodsky has been losing sleep since 2011 when she began to focus her work on the gender division of unpaid labor. In 2018, when she wanted to publish a book on the topic, she said editors weren't interested. "What are you talking about? Women aren't one crisis away from leaving the workplace. Women are in a great place. We have more women in the workplace than men.

"We're fine!" they told her. Then the pandemic happened, "and it was a terrible way to teach a lesson."

Rodsky said we need to blow up all our systems and start again. One of the things she has been advocating for is to have "unpaid labor," such as child care and household responsibilities, be included in the U.S. GDP by 2030.

Carnegie zoned in on the hot topic of talent retention during a time when the phrase "the great resignation" sounds like the next plague about to hit us. "What is it going to take to keep women in the workforce?" she asked. "This rebalancing -- what can companies do? What should they be asking?"

"Three words. Who makes decisions? That's it," Rodsky replied. "Who makes the decisions in your company? When I ask companies that question, it's hard for them to answer."

"And what are the immediate things the private sector should be doing?" asked Carnegie.

"As women, we appreciate Women's History Month, and as an Asian-American, I appreciate Lunar New Year celebrations, but more important than that, is flexibility," said Meng. "Provide flexibility and policies that incentivize employees to be productive and help working families return to the labor force."

Meng recently introduced a bill to the House, the Honoring Family-Friendly Workplaces Act, which seeks to incentivize businesses to provide a healthier and easier work/life balance for both men and women through a certification process, similar to how the EPA Energy Star program helps consumers identify energy-efficient products. The bill identifies policies such as childcare subsidies, paid sick days, lactation support, referrals for fertility and adoption services and paid family leave (of at least 12 weeks a year) as solutions.

It follows the Marshall Plan for Moms, a measure she introduced in February, spurred by the more than two million women who dropped out of the workforce since the pandemic began. "We need to make sure we're not just restoring what we were before the pandemic, but that we're building back better," Meng asserted

How do you rectify that? Rodsky said we have to change who makes decisions in this country and not make it harder for those that look differently than others. Flexibility, equal pay ... it requires men to do their share of housework and childcare. "I'm not an angry feminist," she insisted. "Fair Play is a love letter to men because the system isn't working for anybody."

Meng agreed, saying we need to have more women and moms at the table where decisions are being made. "We celebrate the diversity of Congress, yet over 80% of my colleagues are male," she said. "We are still very far from where we need to be."

Referring to the infrastructure legislation that is being played across so many cable news networks, Meng said, "We're also talking about the other half of that legislation which is reconciliation and investing in the care economy. Women legislators have told senior leadership, ‘You can build all the bridges, roads and highways you want, but if you don't have moms going to work and traveling on those roads and bridges, it's pointless.' These two pieces of legislation go hand-in-hand."

Meng also stressed the importance of the media and private sector working together to make a difference. "Black Lives Matter, Stop Asian Hate ... when you have media partnering with leaders in the private sector … that has provided so much change," she said. "As has support for nonprofits that help our vulnerable communities, and making sure voices are being heard where legislation is being proposed." She encouraged folks to continue to speak up during this inflection point in our country's history.

"Media can be an agnostic force for good or a place that does harm," Rodsky noted, reminding us to be mindful of the messages we put out there, and to keep this mantra in mind: "Do no harm."

MediaVillage and AdvancingDiversity.org founder Jack Myers chimed in on the chat: "The industry once invested in a Family Friendly Programming initiative. A Family Friendly Workplaces program is an incredible opportunity for the advertising community to invest in its own future."

Rainbow's experience spans brand building, business development, content marketing, digital media, and campaign creation and activation. As senior writer for The Female Quotient, she applies this knowledge with a strong focus on thought leadership and me…