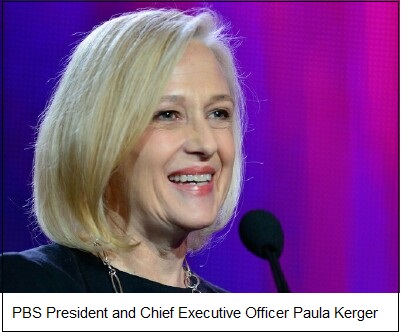 Pasadena, CA – PBS always brings a terrifically engaging selection of personalities and panel subjects to its days at Television Critics Association tours, generally focusing on one-time installments of signature news and information series, one-shot mini-series and documentaries and special music programs. All of these have been included in the typically outstanding PBS days at the Winter 2014 tour. But this time there is a difference: It seems as though PBS is suddenly as well known for its ongoing scripted series as anything else.

PBS' ratings reflect this: Since "Downton Abbey" joined its schedule, along with a number of other ongoing series, they seem to have created a "halo effect" that has boosted the overall performance of the rest of its schedule.

"During the 2012-13 season, PBS' primetime ratings grew 7 percent, making us now No. 8 among all networks in television, cable or broadcast," a very happy PBS President and Chief Executive Officer Paula Kerger told TCA members. Wisely, she spread the praise across all of PBS' efforts. "While we're very proud of the success of 'Downton Abbey,' the increase in audience is due to more viewers across our schedule throughout the year," she said.

Of course, any cable or broadcast network president will tell you that an entire network's fortunes can rise on the strength of one huge signature show, and "Downton" has certainly done the job for PBS.

Digital media also accounts for PBS' recent ratings growth, which seemingly contradicts the notions that PBS viewers are largely quite old and/or that older people aren't Kerger noted. "Americans watched more than 321 million videos across PBS's web, mobile and connected device platforms in December. That's a 71 percent increase over last year." She added that new partnerships with Roku, Apple TV and Xbox "are enabling viewers to connect with PBS content and their local stations in entirely new ways." Admittedly, many critics in the room (myself included) never thought they would hear "PBS" and "Xbox" mentioned in the same sentence, let alone in the context of a partnership.

There's no denying that "Downton" is largely the driver of PBS' renewed power. It has become a series that any network would be happy to have on its schedule, much like CBS' "NCIS" or Fox's "American Idol." "Two weeks ago, over 10 million Americans tuned in for the premiere of 'Downton Abbey,' which was an increase of 22 percent over [the third] season," Kerger said. "But what's really striking is what happened after the television broadcast. In the 24 hours after episode one aired, it was streamed over 400,000 times across desktops and mobile apps and devices, which was a 57 percent increase in the number of streams over the first episode of last season. For the full week following the premiere, the number rose to over a million streams. On social media, the premiere generated a minor uproar, with 97,000 tweets in one day and over 15 million potential impressions."

Although it wasn't on PBS' schedule last year, its other powerhouse franchise, "Sherlock," returned this past Sunday night for its third season (once again consisting of three installments). In many respects, and certainly among teenagers and young adults, "Sherlock" has made PBS even hotter than "Downton" (even if ratings on Sunday for "Sherlock," which follows "Downton," dropped by approximately 50 percent from its lead-in). This was hugely evident Tuesday outside the Langham Huntington Hotel, site of the current tour, as rabid fans of the show in general and series lead Benedict Cumberbatch in particular assembled en masse to welcome their hero as he arrived for a "Masterpiece Theater" lunch session. (The Southern California chapter of the "Cumber Collective" was well represented, as were a number of random "Cumberbitches," as many of Benedict's fans refer to themselves.) We had only seen this level of "civilian" excitement twice before during this tour, first when Julia Roberts and Jim Parsons arrived for a panel about HBO's "The Normal Heart" and days later when Jennifer Lopez and Keith Urban were here for Fox's "American Idol."

There is growing concern over the fact that so much of the young fan base for "Sherlock" finds ways (legal or otherwise) to watch it online after the episodes debut in England, which may result in lower ratings for "Sherlock" on PBS. Kerger noted that PBS this season has "shortened the lag time between production and broadcast [in England] to bring episodes of 'Sherlock' to air more quickly. We'll carefully review the results of this schedule to see how this works for stations and, more importantly, for our viewers."

Similarly, there continue to be questions from reporters as to whether or not PBS would consider moving season premieres of "Downton" out of January and into the fall, closer to their premieres in England. Kerger said that isn't likely, in part because PBS likes to be able to bring talent from the show to the U.S. to promote the arrival of each new season (which would be more difficult to do while they were busily promoting it in England) and also because viewers seem to enjoy watching it right after the holiday season. (Its continued ratings growth every year would seem to support this.)

One reporter asked Kerger if she could foresee the day when a show like "Downton" might premiere online for viewers who wanted to watch it there and then later run on PBS' Sunday night schedule.

"We are engaged right now, not only within PBS but with our stations, to really look at an overall plan of how we look at distribution," Kerger replied. "We have done some experiments where we've put content up earlier than broadcast. I think we were the first broadcaster to premiere something on Facebook before it ended up on broadcast. So we have done it in the past on a very experimental basis, and this was actually before the disaggregation of media had exploded.

"We have endless discussions with stations about how to better connect to people in their communities and build relationship with their viewers," she continued. "Giving people early access to some content online might be an interesting thing to try out, and for those that feel that that's the kind of experience they would like to have, that might be a really great place for them to go."

On the flip side, Kerger continued, "The other part of the whole 'Downton' phenomenon is … the number of people that will go way out of their way to be home on Sunday nights at 9:00 to watch it live. I understand that with a sports event. I understand that with award shows. But for something like 'Downton Abbey,' to feel that they are part of a larger event, to me is quite fascinating, and that's why I talk a lot about the Twitter numbers. The whole idea of water cooler conversation has shifted, but I think we see these glimpsing moments where people are trying to hold onto that."

PBS at TCA was also celebrating the success of another of its signature "Masterpiece Theater" series, "Mr. Selfridge," the second season of which will premiere on Sunday March 30 (along with the Season 3 premiere of "Call the Midwife"). Star Jeremy Piven was here to talk about the show (and, very briefly, the upcoming feature film continuation of HBO's "Entourage," about which he would only say that the script is "great").