PBS at TCA: “Hamilton,” a “Poldark” Sandwich and Life After “Downton” 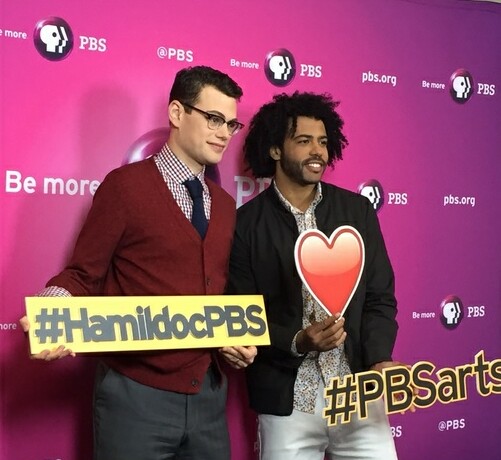 Beverly Hills, CA – Yesterday was a noteworthy one here at the Summer 2016 Television Critics Association tour in that it marked the first time PBS has appeared before this group since “Masterpiece” staple "Downton Abbey" ended its historic and much-honored six-season run in January.  The titanic popularity of "Downton" since its debut in the US in January 2011 has powered PBS through many a tour and kept it at the forefront of the television press and the viewing public alike.

Indeed, reflecting on the fact that she has been in her current position for ten years, PBS President and CEO Paula Kerger (pictured below) during her press conference yesterday admitted that when she arrived “there were some [people] that thought maybe public broadcasting’s best days were behind it.” She paused before adding, “We had never heard of a place called Downton Abbey.” 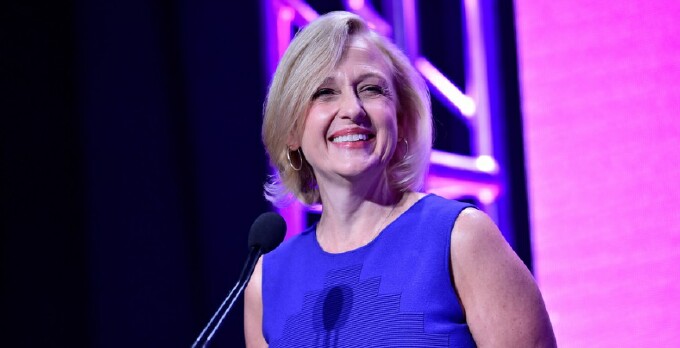 Downton was truly a game-changer, but that’s all over now. Of course, PBS has known for the last few years that it would be beneficial to come up with a Masterpiece project or two that might attract the same kind of attention as Downton. Certainly the Sherlock franchise has helped – and, yesterday, PBS announced that three new Sherlock movies will premiere in early 2017. Meanwhile, last year’s hit Poldark -- which surprisingly generated huge Polbuzz – is set to begin its second season in September (and a third season has been ordered). Poldark made an international star of its dashing leading man, Aidan Turner.

PBS is also betting on another new Masterpiece entry titled Victoria, an eight-hour drama about Queen Victoria that begins when she ascends to the throne in 1837 at the age of 18. The title role is portrayed by Jenna Coleman, an actress with a huge following because of her many years playing Clara, the Doctor’s most recent companion, on Doctor Who.

Showing off the continued strength of the Masterpiece brand, PBS presented back-to-back panels with the casts of Poldark and Victoria, the cumulative impact of which was the realization that PBS is suddenly unafraid to be overtly young and sexy. In fact, when introducing the beautiful actresses Eleanor Tomlinson and Heida Reed, who play the two loves of Ross Poldark, and Aidan Turner, who was seated between them, Masterpiece executive producer declared, “Here we have a Poldark sandwich.” (Turner is sandwiched between Tomlinson and Reed below.) 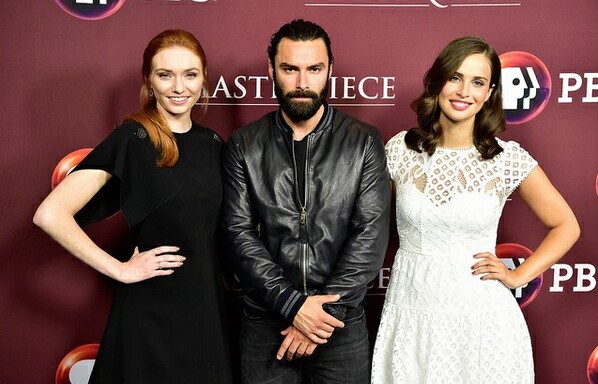 Sherlock, Poldark and Victoria, along with continuing 1950s detective drama Grantchester (also renewed for a third season) and the returning Indian Summers, all have their strengths. But together or separately, these shows cannot be expected to fill the void left behind by the departure of Downton, one of those unforgettable television experiences that can’t be replicated and can be defined only as lightning in a bottle.

PBS’ opening day wasn’t limited to talk of Masterpiece. It included a panel for the upcoming Great Performances presentation of Hamilton’s America, a session which in all likelihood will be looked back upon at the end of this tour as one of its most exciting. Hamilton’s America is a unique documentary that is not so much about the making of the Broadway phenomenon as it is about getting people excited about history and the impact the musical has had on young people.  Daveed Diggs (pictured at top right with filmmaker Alex Horwitz and below with Horwitz and executive producer David Horn), who recently won a Tony Award for his portrayal of Thomas Jefferson in the show, was on hand to reminisce about what it was like to be a part of the Hamilton experience, which included feeling “like a Beatle for a block” every night on 46th St. when he left the theater and had to make his way through a crowd of screaming fans, and meeting President Obama three times, one of them while performing at the White House.

Asked how that felt, Diggs' answer said it all: “When Barack Obama comes up to you and says, ‘Daveed, how are you?’ What?!!! You know?” 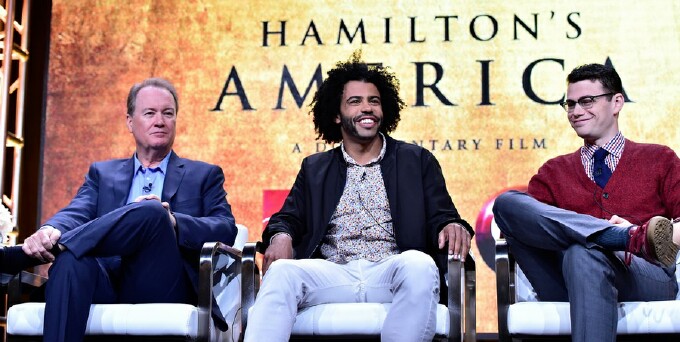 Another highlight of the day was a session with the country’s premiere documentarian Ken Burns, who seems to turn up at PBS TCA presentations at least once a year with a new program to promote. This time it was Defying the Nazis: The Sharps’ War, for which he served as co-director and executive producer. It tells the story of Waitstill and Martha Sharp, a Unitarian minister and his wife who in 1939 left their children in the care of their parish and went to Europe to save hundreds of political dissidents and Jewish refugees from the Nazis. Burns was joined on stage by Artemis A.W. Joukowsky III, the co-director and producer of the program and grandson of the Sharps.

“This is a project unlike any other that I’ve worked on, in that when it was brought to me most of the shooting was done,” Burns explained. “All of the interviews were done. A great deal of the archival research had been completed, and Artemis was struggling to put a film together.  I had known him for many, many years. We both attended the same college, though I’m a decade older, and so it was at first a kind of obligation.

“I had a look at this thing and could see a diamond in the rough,” he continued. “Over the last three years -- I’m working, as you guys know, on many different projects at once -- late in the evenings or on weekends after the kids were asleep or when they were off playing, I would work on this film and just try to make it better.”