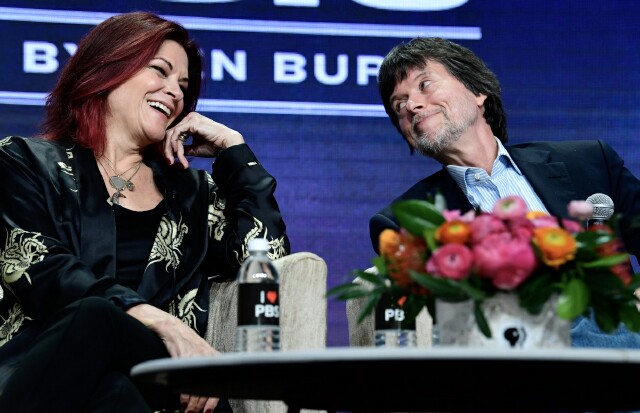 Beverly Hills, CA – This September, as the “traditional” television season begins, it won’t just be the streaming services and cable networks that present the usual challenges to the broadcast networks as they try to find an audience for their fragile freshmen series.  The broadcasters will also have to contend with America’s top documentary filmmaker, master craftsman Ken Burns, as his latest epic production, Country Music, makes its debut September 15 on PBS.  This isn’t the first time one of Burns’ massive multi-part documentaries has threatened to steal the show when broadcasters are at their most vulnerable; many of his most successful mega-films have premiered in the same critical period.

Burns always attends Television Critics Association tours whenever he has a new project that is ready to go.  The membership over the years has shifted from hard-boiled newspaper reporters to critics to bloggers to social media mavens, but the enthusiasm for this man and his work remains strong, no matter the demographics.  Even GenZers want to hear what he has to say.

His TCA sessions are always well-attended highlights of these gatherings, and this year was no different, though there were two exceptions to the norm.  First, he was joined on stage by legendary country performers Roseanne Cash (pictured at top with Burns) and Dwight Yoakam and acclaimed songwriter Marty Stuart, who were equally engrossing.  Second, the session for Country Music was followed by a dual-purpose party.  It was a celebration of the documentary itself and of Burns’ 66th birthday that very day. 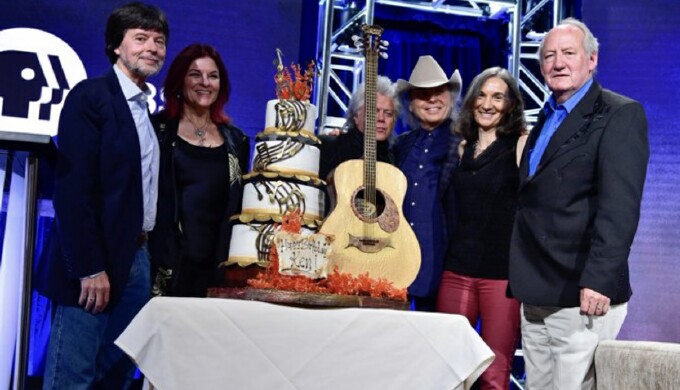 “I was completely unprepared on this project,” Burns told reporters, who weren’t sure at first what he was getting at, because Burns always seems to be on top of everything.  (He later told reporters he currently has no less than eight new projects in simultaneous development or production.)  “I think I speak for writer and co-producer Dayton Duncan and producer Julie Dunfey [when I say] that we were unprepared for the kind of higher emotions we would run into and find unavoidable in mastering this very complicated story about this music.”  Duncan and Dunfey were also on stage.

“I am a child of rock and roll and R&B, and I knew a little bit [about country],” Burns explained.  “I worked at a record store in Ann Arbor, Michigan, in the late ’60s and early ’70s, and I sold a lot of country music and knew a lot of country music.  There’s a moment in our film when Vince Gill says, ‘I don’t know whether you write the songs, or the songs write you.’  I feel in some ways the [documentary] projects pick us.  I had a dear friend in Texas.  I was staying with him and his wife and he just said, ‘Have you ever thought about country music?’  This was the end of 2010.  It just hit me like a ton of bricks.  I went to Dayton and I said, ‘What about country?’  He said ‘yes,’ and we’ve been plowing towards it, because like all the other films we’d done, it’s an opportunity to understand who we are.”

“What we try to do is enter into the topic and learn what we can and let the story tell us,” Dayton said.  “One of the things that we learned, and I hope it comes through in the film, is that country music was never just one type of music.  It’s been lots of types of music from the get-go, and it branched into even more multiple types of music.  A lot of people will be bringing preconceptions and stereotypes [to this film], some because they love country music and some because they don’t think that they do.  We set out as we always do to try to tell the truthful story, which in this case, I think, will bust a lot of stereotypes.”

Many people refer to country music as a “single thing,” Burns explained.  He disagrees.  “It’s always been a mutt,” he said.  “Those who would trade on the notion of a distinct American original American have got it wrong.

“We tend to, with our conventional wisdom, silo country music as a single thing,” he continued.  “First of all, there’s no silo.  There are no borders.  It’s a molecule that’s attached to other molecules that form an American musical compound that’s bordering jazz and bordering blues and bordering rock ‘n’ roll.  In fact, country is one of the parents of rock ‘n’ roll.  What people discover is they know a lot more about country music than they think they do.

“Our last episode is called Don’t Get Above Your Raising, which is an old southern saying, don’t get too big for your britches,” he added.  “Don’t forget where you’ve come from.  Unlike any other music form or any other form, there is an equality.  There’s no communication except among equals anywhere in this world.  Only in country music do its stars look at its fans in the eye and understand that what they heard in that song is as true for them as it was when they wrote the song and performed it.”

When artists enter into country music they literally join a family, Burns asserted.  “You may not, as someone [says] in our film, have a hit for 30 years, but you are still okay.  You are not forgotten, and you are not tossed out.  It represents an American possibility that we have forgotten, and that’s community.  These [artists] inhabit that space with the kind of generosity that makes everyone feel that they are welcome, and I don’t know where that is.  You can’t say that to Mick Jagger.  You are not given access. This is stuff I didn’t expect, you know.  It’s an amazing world, and Julie and Dayton and I just feel so privileged to have been asked in.

Making a reference to his earlier documentary series Jazz, Burns recalled that Louis Armstrong said, “‘There ain’t but two kinds of music in this world: good music and bad music.  And good music, you tap your foot to.’  These musicians know that.  I think we cloak country music in one aspect of [being about] hound dogs and pickup trucks and good old boys and six-packs of beer, because it’s really hard to acknowledge that it deals with two four-letter words that are very difficult to talk about, which are love and loss.

“This is what we had no idea of [going] in, how extraordinarily transforming and powerful and emotional it would be for us,” he added.  Judging by the clips we saw during the session, the audience may be in for similar pleasant and profound revelations.