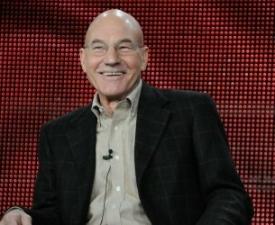 PBS offered a typically diverse array of sessions, including one for Great Performances' presentation of Macbeth featuring Patrick Stewart; one for the Nature special Invasion of the Giant Pythons, at which reporters could interact with a 13-foot-long snake that proved to be far better company than some of the celebrities who have passed through here in recent days; one for American Masters' documentary When You're Strange: A Film About The Doors, with producer Dick Wolf and the band's legendary drummer, John Densmore; and a very brief sneak preview of Baseball: The Tenth Inning, a new installment of the classic Ken Burns franchise. There was also a brief lecture by Jamie Lee Curtis during a press conference for the environmental documentary Dirt! The Moviein which she laid blame on "old" people approximately 45-plus for "eff-ing" up the planet, a sensational performance by Mary Chapin Carpenter marking the 40th anniversary of Rounder Records and much more.

To say that these sessions were stimulating would be an understatement. Collectively, they served as a valuable reminder of the importance and relevance of PBS on today's media landscape.

One of the greatest things about TCA is that reporters and critics never really know which sessions are going to surprise them and resonate in unexpected ways. This is especially true during PBS and basic cable panels. It happened for me during the Macbeth press conference as I sat and listened to the recently knighted Sir Patrick Stewart talk about theater and television with unparalleled eloquence. I had no way of knowing in advance that Stewart would have so much to say about the value of science fiction programming, nor that he would cheerfully condemn cheap reality programming in so unique a fashion.

Stewart, who will also be seen on PBS opposite Doctor Who star David Tennant in a new production of Hamlet, was asked if there is any connection between fans of his work on Star Trek: The Next Generation and fans of his classical stage performances.

"One of the great delights for me of the past 25 years has been unexpectedly to find a commercial success in Star Trek: The Next Generation and then to find that because of that success, when I was able to return to classical theater and modern theater, that a percentage of that science fiction fan base, probably only out of curiosity or a feeling that they were going to see Captain Jean-Luc Picard, came to see me in the theater," he replied. "There has hardly been a performance when I have not met someone afterwards who has said, 'I had never seen a play before. I have never seen Shakespeare before, but I'm coming back.' I said to David, 'You and I really ought to be given some kind of accolade because between the two of us we have significantly brought a new audience into the theater.'"

Playing the role of Picard gave Stewart a fast education on the harsh realities of the American entertainment industry. "One of the things that took me by surprise when I came to live and work in Hollywood was the rebuttal of what I'd always believed, that I was coming to a completely democratic society which did not have a hierarchy," he recalled. "And what I found when I arrived in Hollywood was that it had a more carefully and elaborately structured hierarchy than I had ever known in my life. And shooting a syndicated science fiction drama series put me way down the rung of that ladder.

"In England, that couldn't have happened," he continued. "In England, we just work. There is no taste distinction drawn whether you are doing a radio play or a guest role in a television series or you are working for the Royal Shakespeare Company or the National Theatre or you are appearing in the commercial West End or you are in a regional theater. You are working, and there is no pejorative aspect of any of that work. That's what I didn't find when I came to Hollywood."

Not that everything is perfect and wonderful in Britain's entertainment industry. Stewart finds the "huge influx" of reality shows "deeply dismaying and discouraging." He recalled a particularly miserable experience watching one on the BBC. "I watched about 25 minutes of it, and I was alone, and I thought to myself, this would be a really good time to die, because I wouldn't mind leaving this world right at this moment while I'm watching this particular reality show," Stewart quietly revealed, sounding every bit the dramatic stage actor. "And this is the highest-rated show on British television!

"There's just so much of it, and there's so much else that doesn't get done," he continued after the laughter subsided. "But luckily there are companies like PBS that make sure that high-quality art of all kinds gets on the television screen."

"What was the name of the show?" one critic cried out as the session drew to a close.

"Oh, yes, of course I'm going to tell you that," Stewart answered with great flair. "I have to go back to England next week!"