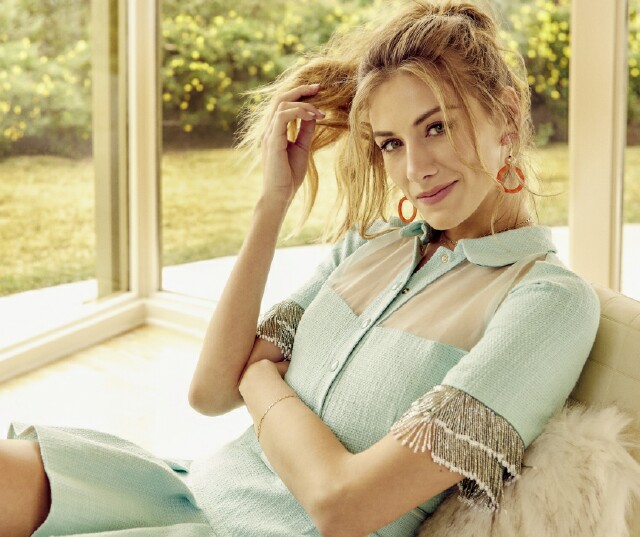 Since transitioning from the performing arts (under the guidance of legendary choreographer Debbie Allen) to acting, Perry Mattfeld has long been honing her skills.  However, nothing prepared the actress for her most challenging role to date, that of Murphy Mason in The CW drama In the Dark.  As Mason, Mattfeld stars as a later-in-life-blind woman whose disillusionment with the world is exacerbated when her friend Tyson is murdered.  Fearing his murder will go unsolved Murphy embarks on her own investigation, one that grows increasingly dangerous.  "This role isn't just the girlfriend, I've played those,” she revealed during a recent exclusive interview with MediaVillage.  “This is the hardest thing I have ever done and the hardest I have ever worked.  I had to pull from everything I had in me to try and create this because it goes so high and so low.  It never really sits in the middle."

For Mattfeld, it was the complexity of Murphy that intrigued her, along with making what appears to be on the surface an unlikeable character sympathetic.  "What was especially interesting to me was how raw she is," she explained.  "She never puts up a front.  It's like when you're in London and you ask how someone is and they reply, 'At least I'm alive' -- kind of a glass half full.  Especially in TV, there are characters that are perfect and lovable and idolized, and here you have this totally dysfunctional anti-hero.

"But you do still root for her and want her to figure it out," she continued.  "That definitely sets us up with somewhere to go.  I appreciated the opportunity to just strip down all pretense that I was always happy and upbeat and just live in this completely vulnerable and raw [role] -- that was really cool for me." 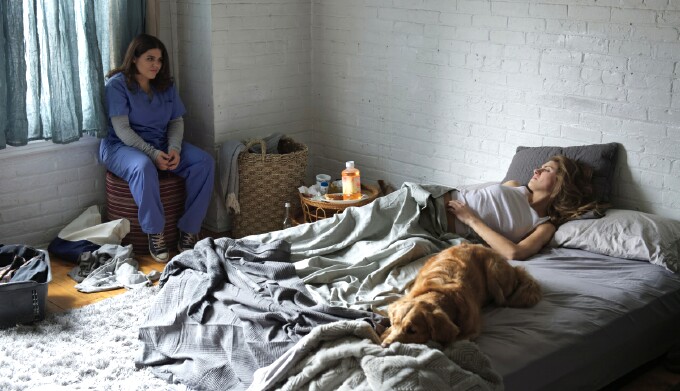 Mattfeld (pictured at top and above, right, with co-stars Brooke Markham and Levi) told me that while reading the pilot script she was most surprised by its extremes, going from crying to hunched-over belly laughing.  "The extremes take you places and it's so consuming in terms of the roller coaster of emotions,” she said.  “That sarcasm, to that very witty, sharp humor is what I appreciated.

"I also love both animals and children," she added.  "So, showing up to work every day to not only the most beautiful dog actress ever in Levi (who plays her guide-dog Pretzel) but being around puppies and getting to watch guide dogs with their owners was beautiful.  It made me cry at times watching the beautiful bond that they have.  It made it hard to leave.  Even with our crew, we had such a wonderful time and became so tight, I do think that you see that on screen."

According to Mattfeld, immersing herself in the world of the blind was at times all-consuming.  "During the pilot I turned 24," she revealed.  "I was opening a present the producers had given me, putting my hand in and trying to feel what it was.  They were like, 'Perry it's okay to look.'  It hit me then -- it was okay to look and use my eyes to open the package.  A college professor said that being an actor is like being an athlete; you have to practice that [ability] to check in and check out.  If you carry that with you that's when you can get into trouble.

"I've always kept in mind that it's my job to be able to turn that on and off and believe it’s the healthiest way to leave that behind," she added.  "As you're going to see, as light as parts of our show are, and as hilarious as other parts are, there's some heavy stuff that's raw and very effective."

With 13 episodes of season one wrapped, Mattfeld is hopeful In the Darkreceives a renewal for a second.  "The CW has made us feel very loved," she said.  "I know In the Dark is very special to them and they've gone out of their way to let us know that.  [CW President] Mark Pedowitz has his own personal connection to this, as it was kind of his idea, and was born from a real experience and became his idea.  That makes it special for us, too, and it’s why we worked so hard.  We wanted it to be good.  We knew we had something special."

In the Dark is telecast Thursday at 9 p.m. on The CW.