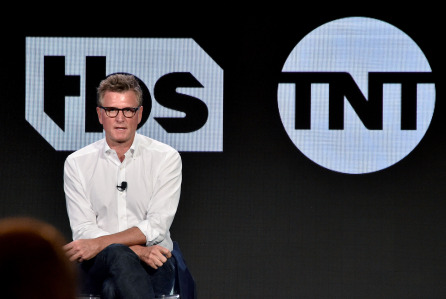 Lots of people make New Year's resolutions to simplify their homes or lives. Their ranks are, at last, being joined by television executives in a move to unclutter the airwaves that augur well for the long-term health of the media-industrial complex.

"We have overstuffed the bird," Kevin Reilly, president of the TBS and TNT cable networks, declared last week at a session of the Television Critics Association winter press tour. "We need to create a better viewing experience."

Reilly (pictured above), who is also Chief Creative Officer of Turner Entertainment, was referring to heavy commercial loads, which, he said, not only make it less enjoyable for viewers to watch TV but also diminish the value of the spots that advertisers are buying. Talks are underway, Reilly told journalists, to reduce commercial loads by more than half in three new drama series for TNT, which will give audience members more of what they actually tune in for -- program content.

Only three new shows? Well, to repeat the punchline of an old joke about lawyers, it's a good start.

In another sign that TV honchos are having second thoughts about the debasement of their medium, Turner executives discussed at CES last week another form of decluttering. The idea is to reconfigure commercial pods with fewer, longer spots to be produced in the vein of branded entertainment or native advertising.  The focus would be on spots that last two or three minutes each -- for instance, a trailer-style commercial for an upcoming movie -- rather than traditional commercials that run 15 or 30 seconds apiece. So a pod could be composed of one three-minute spot instead of crammed with six :30s or a dozen :15s.

To promote a new sitcom, "Angie Tribeca," TBS plans a 25-hour, commercial-free debut on Sunday of all 10 episodes of the first season, on cable and online. The commercial-free aspect of the premiere is being touted almost as much as the series itself. And truTV, a sibling of TBS and TNT under the Turner umbrella, has announced that, effective in fall 2016, it will significantly reduce ad loads: Instead of 18 to 19 minutes per hour devoted to commercials, promotions and other non-program content, the amount will be slashed to 10 to 11 minutes per hour. The additional time is to be turned over to the programming department so that shows will run longer -- again, giving viewers more of what they came to see in the first place.

Turner is climbing aboard a band wagon with passengers that include Fox Broadcasting, which has been scheduling fewer commercials during episodes of series such as its hit drama "Empire." To make that possible, Fox has signed brands like Lincoln and Pepsi to sponsorship deals that involve product integration, events and other types of pitches that are less interruptive or invasive. (TBS enlisted sponsors for the ad-free introduction of "Angie Tribeca.") A plotline of several "Empire" episodes this season was devoted to a leading character, Jamal Lyon, being chosen to make a Pepsi spot; in a nifty moment of life imitating art imitating life, viewers eventually got to see a real Pepsi spot called "Jamal Lyon's Train Ride" during a commercial break.

Steven Burke, the chief executive officer of NBCUniversal, said last week at CES that he was surprised by the considerable declines in cable viewership over the last couple of years. He blamed the falloffs on schedules filled with too many reruns and the propensity of viewers to use DVRs to time-shift what they watch.

Of course, viewers use DVRs not only to watch shows when they want, regardless of when networks schedule them, but also to avoid commercials. (I'd suggest to Burke that if he hasn't done so already, he ought to sit and watch, in real time, some of his own networks' programs and see for himself just how annoying heavy commercial loads can be.) TiVo even has a new offering, TiVo Bolt, that enables users to skip entire commercial pods at the press of a button.

There's another way to skip commercials, either individually or in pods, that is fast catching on with audiences: streaming video services. When people are asked why they sign up for Netflix, they often cite the absence of ads. It's no coincidence that networks are thinking twice about commercial loads just when a competitor without commercials is growing so rapidly. Hey, that's how capitalism is supposed to work, right?

Another timing issue: With 2016 a presidential election year, political ads are going to flood the airwaves. Wouldn't it be nice of brand advertisers to give viewers a break by stepping back a bit from peddling their wares?

I believe that one of the biggest issues this year for Madison Avenue will be figuring out how to counter consumers' increasing frustration with and disdain for marketing, as evidenced by the brouhaha over ad blocking and by a magazine subscription offer I received the other day, which proclaimed: "Why you'll never see advertising in our magazine ... We publish Cook's Illustrated to help you succeed in the kitchen. Not to sell you products."

Doing something substantive about cluttered commercial pods will be a big step in the right direction.