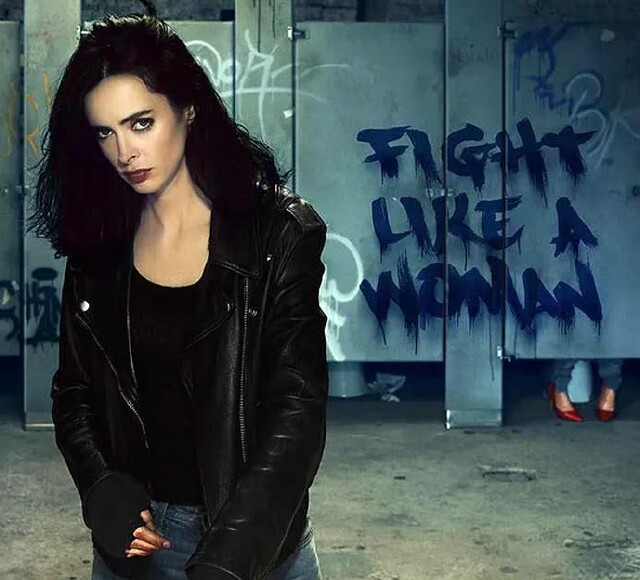 If I had to choose a show that best reflects the tone of the times – one that seems right in line with the #MeToo and #TimesUp movements, even though it was written and produced before they became the powerful forces they are today – it would be the second season of Netflix’s Jessica Jones.  It’s all about the emotional connections that women have with other women – their mothers, sisters and friends – and the formidable strengths of those relationships.  And despite the fantasy and science-fiction and super-heroics of it all, it never hits a false note in its depiction of those bonds.  The characters are as fully realized as those in some of the best dramas in this Golden Age of television drama, and the acting is uniformly award-worthy across the canvas.  But I believe the success of this season of Jessica Jones – arguably the best season of any series in Netflix’s corner of the Marvel universe to date – is because all its episodes were directed by women, most of them were written by women, and the series has the very talented Melissa Rosenberg as its showrunner.  Who better to explore the psychological nuances of the very complicated relationships between the fearless females in this franchise?  (Note:  This column gets a bit spoilery from here on out, so anyone who hasn’t yet binged JJ and intends to do so may wish to stop and return to it at another time.)

Who cares if JJ Season 2 doesn’t have a formidable villain at the center of its 13-episode storyline (as some clueless critics have carped)?  Watching the title character and the women in her life confront their enemies (and there are plenty to go around) and their own internal demons (ditto) is way more compelling than yet another superhero tale about people with powers battling big bads.

Season 2 isn’t about a villain like the creepy Kilgrave, who despite being killed off in Season 1 makes an appearance of sorts.  (The inclusion of Kilgrave is the only unnecessary story element in Season 2, as far as I could tell, but not at all damaging to the tale being told.)  Rather, it is all about Jessica’s relationship with her birth mother, whom she has understood to be dead since a catastrophic car accident killed everyone in her family when she was a little girl and left her clinging to life.

As it happens mom wasn’t totally completely forever dead, either, and was brought back and given super strength (and a very bad temper) by the same doctor who saved and empowered Jessica.  The doctor plays a major role in the Season 2 drama, and even though he isn’t really a villain, he is guilty of playing God, something other characters intend to either hold him accountable for or take advantage of.

The rest of the story details won’t be spoiled here, with one exception, which won’t ruin anything for anyone:  Because of the ordeal she was put through and the unforeseen complications therein, Jessica’s mom is intermittently monstrous and easily driven to murderous rampages that she cannot control, sometimes by even the most minor annoyances.  But she also has a big heart.  She’s deadly, except when she isn’t, and watching Jessica balance getting to know and care about the mother she thought was dead with managing the monster she has become is a super-duper study in super-human drama. 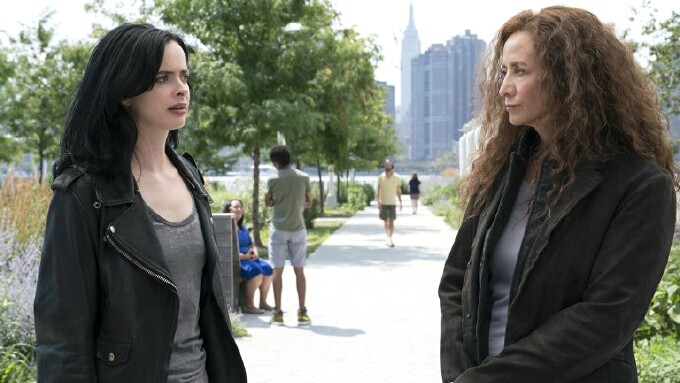 Meanwhile, Trish Walker, the girl Jessica was raised with and thinks of as a true sister, endures a crisis of her own that is related to the drama surrounding Jessica’s mom and strains the relationship between the two siblings.  And in an unrelated but no less compelling storyline, fearsome Atty. Jeri Hogarth, an acquaintance of Jessica’s, confronts a devastating health crisis and is uncharacteristically victimized when her defenses are down … until she regains focus and reassuringly kicks ass.  She is thrilling to watch throughout.

I think the best word I can use to describe the caliber of the performances by the actresses portraying these four formidable yet vulnerable women is “authentic.”

As she did in Season 1, Krysten Ritter crushes it as Jessica in every physical, emotional and psychological way imaginable.  Even when she is in full attack (or survival) mode, making mistakes as we all do, Ritter sees to it that Jessica never loses touch with her character’s basic humanity.  Indeed, by season’s end she is more in touch with it than ever before.  Ritter remains Marvel’s most marvelous marvel.

Similarly, Carrie Ann Moss, as Hogarth, is so commanding she could squash Alexis Carrington beneath her heel and not even notice.  There has never been anything particularly sympathetic about her character, but that changes this season when she is knocked flat with such unforgiving force that her humanity is fully exposed.  Anyone watching can’t help but begin to root for her and feel for her … for a little while, anyway.  Moss is, in a word, magnificent.

Rachael Taylor, as Trish, has a lot more to do this time around than during her previous appearances in JJ and The Defenders.  While the story of Trish battling her own internal monsters is probably the least satisfying component of the Season 2 narrative, Taylor gives it everything she’s got, which seems to be more than most of us have.  (By the time the season is over, see if you agree with me that Hellcat might be making an appearance next time around.)

But it is Janet McTeer (pictured above, right, with Ritter) who truly does the impossible here, virtually stealing the show from beginning to end as Alisa Jones, Jessica’s loving and lethal mother.  For me, watching her create a terrifying, one-of-a-kind character we simply haven’t seen before (and will likely never forget) brought to mind memories of the magic of Margo Martindale commandeering the spotlight as backwoods barracuda Mags Bennett in the second season of FX’s modern classic Justified.

I defy anyone to take their eyes off McTeer when she is on their screen of choice.  Indeed, I defy anyone to not get hooked on Jessica Jones, if only for the thrill of watching four very talented actresses in top form.