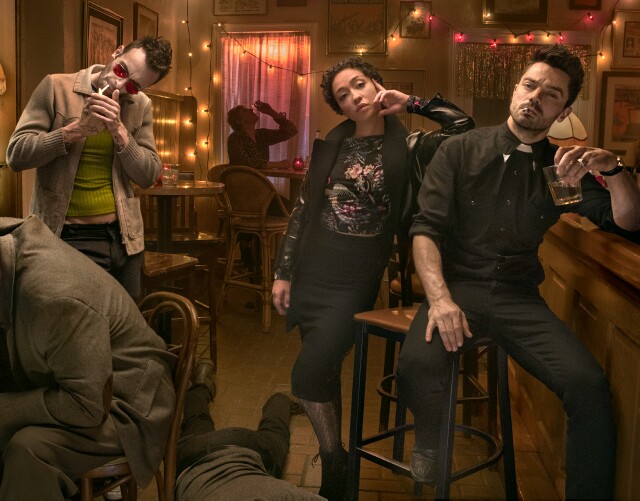 Preacher is a special creature.  AMC's deliriously addictive drama is a powerhouse comic book adaption with a style that could only have come from the likes of series creators Seth Rogen, Evan Goldberg and Sam Catlin.  (Rogen and Goldberg already have experience putting religious topics through their unique comedic lense, or grinding them up as the case may be, as evidenced by 2013's This Is the End, while Catlin's work as a producer of Breaking Bad explains Preacher's innate badassery.)  Although Season 1 had a slightly slower pace and darker tone, the presence of its many signature “holy sh*t” moments completely justified the crawl of some of its early episodes.  Season 2 kicks things up a notch, ditching the small-town problems and southern drawl for a faster tempo and a somewhat lighter mood.  It kind of feels like a combination of Dogma and Snatch, mixed with a pinch of Ash vs Evil Dead.  Overall, Season 2 of Preacher is existential, action-packed, funny and not to be f**ked with, and if you think that sounds awesome, you’re right.

After a brush-up binge I’ve come to the conclusion that Season 1 in its entirety is actually just the opening act to a much larger story.  It set the mood and laid the groundwork for the series as a whole through episodes that religiously (see what I did there?) depicted both past and present events that defined the characters we’re introduced to in the pilot.  Jesse Custer (Dominic Cooper), mostly referred to as “Preacher,” is a man with a dark past attempting to live up to the boyhood promise he made to his father:  To be a good man in world filled with so many bad ones.  Tulip O’Hare (Ruth Negga) is Jesse’s girlfriend and childhood bestie who wants him to drop the Jesus stuff and go back to Bonnie and Clyding with her, especially since she’s finally located the guy who betrayed them both way back when.  And then there’s Cassidy (Joseph Gilgun) who, besides being another bestie of Jesse’s, is also a hard-drinking Irish vampire.  (Gilgun, Cooper and Negga are pictured below, left to right.) 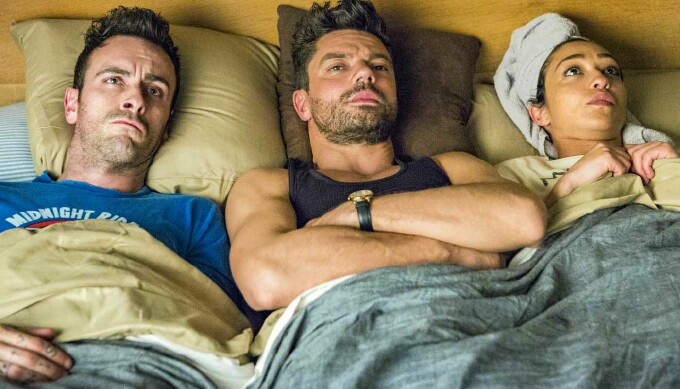 Cooper and Negga are great at bringing the duality of their complex and conflicted characters to life.  Tulip is a veritable badass with a formidable temper and no reservations about vocalizing her opinion, but she has an obvious soft spot for Jesse that brings her fleeting moments of vulnerability right up to the surface.  Jesse, on the other hand, had initially lost his faith and gained a drinking problem, but when a supernatural force called Genesis gave him the power to make people do things just by telling them to do so, he saw it as a chance to finally bring the people in his small Texan hometown to God.  Of course, like using a monkey paw to make a wish, his commands have an occasional tendency to manifest is dark ways.

Gilgun’s character Cassidy is a bit more one note, but in the best of ways. Besides being a drug addict, pothead and whoremonger with a filthy mouth, he’s hilarious to boot.  Sure, he kills people sometimes (and animals a lot of times), but like he said, it’s never anyone who didn’t deserve it.  At the end of the day, Cassidy just wants to stay out of the sun, get high and get laid, and he’s a dope enough character that I honestly don’t mind that a bit.

Preacherhas a combination of things I never thought I would find in a single program.  The usual favorites like extremely well-choreographed action sequences and a proper amount of movie quality gore are actually the least surprising aspects of the show.  There are angels, a phone that calls Heaven, a travel agent who can send people to Hell, a town almost completely full of twisted southerners, a disfigured dude appropriately named “Arseface” (Ian Colletti) and a church announcement board that constantly has a comically inappropriate message on it -- and that’s just for starters.

Throughout the first season there were countless moments when the material got realdark and disturbing, but the part that always amazed me was how the narrative did eventually tie up every loose end and answer every question posed, even if it took a couple episodes to do it.  I mean, we dive pretty deep into the lives and times of Annville’s more relevant citizens, but by Season 1’s explosive end all those things become a non-issue.  It’s a move that, while jarring, allows the narrative to tighten its focus on the trio of Jesse, Tulip and Cassidy on their Season 2 journey to literally find God while simultaneously eliminating the need to double back and check in on the unfortunate townsfolk.

Whether the viewer is a fan of the original Preachercomic books published by Vertigo (an imprint of DC Comics), a fan since Season 1, or new to the series altogether, there is no denying that Preacherfits in perfectly with the ongoing waves of high caliber entertainment hitting screens these days.  The best shows of the bunch all seem to have a habit of challenging their viewers by pushing them out of their comfort zones.  To me, it doesn’t matter if that’s accomplished through gore, increased sexual content, warped religious themes, or intense visuals, as long as each of those risks are taken in a way that serve an already stellar script and result in a product of both substance andquality.

Preacher does just that, and goddamn is it good.

Preacher is telecast Monday at 9 p.m. on AMC.