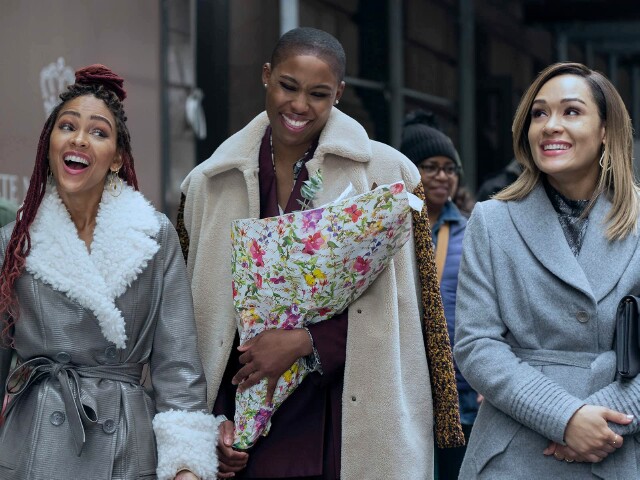 Since Girlfriends, I think that television has been searching for that quintessential female P.O.C.-driven sitcom, and while we've come close from time-to-time, HBO's Insecure was probably the most successful iteration of something like that. At least that was the case, until I saw Prime Video's Harlem. I've seen a lot of Black-centric television programs of late, and they do not all hit the mark every time, but this is not one of those. Harlem is self-aware (in a good way), it has messages but isn't preachy, and it's appropriately messy but not infuriatingly so, like so many others have made the mistake of becoming. It is current, funny and more than a bit daring, all without losing the narrative. In the wake of Insecure's final episode, Harlem does a lot more than just seem like the next best thing. It is.

Written and created by Tracy Oliver (who wrote the feature films Little and Girls Trip and adapted First Wives Club for television), Harlem follows four college friends who live their lives in and around Harlem, New York. Camille (Meagan Good) is an adjunct professor at Columbia University, Tye (Jerrie Johnson) is the Black queer owner of a successful dating app aimed primarily at queer people of color, Quinn (Grace Byers) is the owner of a semi-successful fashion boutique that provides meals for the homeless, and Angie (Shoniqua Shandai) is the not-technically-homeless-but-definitely-living-on-Quinn's-couch aspiring singer of the group. 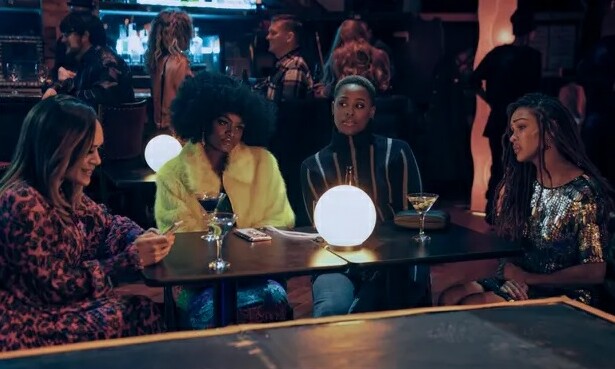 The series also features P-Valley's Tyler Lepley as Camille's ex, Ian; Robert Ri'Chard as the surprisingly-ripped stripper with a heart of gold, Shawn (last time dude was on my radar was the early 2000s sitcom One on One), and the legendary Whoopi Goldberg as Camille's boss, Dr. Elise Pruitt.

Deciphering Harlem is not unlike describing a fine wine. There are notes of an Insecure-like budget, which is discernible from the high-quality visuals and super-Shazam-able soundtrack (which is an understatement with all that Megan and SZA in there). Its wit is sharp and the sex scenes are HBO-bold. Yes, it educates us, but all the while it's got the legs of a comedy and never lets us forget it, like black-ish. They've even got their own ridiculous in-series reality show the ladies all follow -- Weather Wives (which is about the unnecessarily messy lives of a group of meteorologists' wives) -- not unlike the characters in Dear White People, who also watched fictional trash TV.

There's a surface-level "realness" to the characters in Harlem that I mostly attribute to the balanced use of cuss words which, to those who know, is an art form. However, that realness extends well beyond the creatively crass tongues of this particular group of New Yorkers and into its interpersonal dynamics. These women aren't the vapid, two-dimensional creatures they watch on Weather Wives, and their dialogue reflects that. They have organic conversations about deep shit, and nine times out of ten they're just trying to keep it funky with one another, even if their personalities occasionally get in the way.

There are plenty of representational bases covered here, as well. As mentioned before, not only is Tye black and queer, she's also tech and business savvy and probably has the most bread out of all the ladies in the group. Aesthetically, I call her "Geesah," because she gives me kind of a gay Issa vibe. Quinn's character is a light-skinned, half-Jamaican woman, who I assume is meant to be representative of the mixed-race West Indians who have at least one immigrant parent (a group I happen to be in myself). Camille is the main character, so she's more representative of a type of female lead than anything else, and Angie rounds out the group by giving us ratchet-best-friend vibes in the absolute best of ways.

At the end of the day, however, they are all Black women and still get treated as such in all the ways that matter. This is thing that ties them together, even more so than their friendship. There are plenty examples of this in the show, like them being ignored by white doctors, never living up to their mothers' expectations, being expected to placate the ignorant antics of Karens and their white tears, and their sex/race playing a heavy hand in how they're viewed professionally. It's this bond that makes all the down-to-Earth aspects of the series so much fun and relatable. Topics like vaginal steaming, natural hair stylists and whatever "Big Nigga Season" is are more entertaining through the Black lens (which is arguably the only appropriate lens through which most of it should be viewed).

Again, the show never loses sight of its comedy in all this. Sure, we're talking about gentrification and representation, but we're also talking about dating and sex and natural hair and wigs and dropping the n-bomb a hundred times while twerking in front of the white women at yoga class. And let's not forget the season-long thread of Angie being in Get Out: The Musical, which is, well, a treasure trove of commentary, on top of being hilarious as f**k. To call this a pretty well-rounded show would be a serious understatement.

Harlem, like ABC's Queens, follows four women in a specific part of New York attempting to live their best lives in spite of all that works against them, but Harlem doesn't revolve around comparatively hyper-intense interpersonal drama, so much as it follows the ebbs and flows of the much more believable lives of these successful but still normal-as-hell women. Sure, the urge to liken this series to Sex and the City might feel reflexive, but I urge you to try an avoid such comparisons.

The fact of the matter is that white women of every type have been thoroughly represented in every configuration, on every single entertainment platform. Even with this wave of Black female-driven television, women of color are still hella under-represented, which makes the question, "Doesn't SATC follow four women of the same age in New York City, too?" feel a lot like the question, "But don't all lives matter?" And if you're asking that question, you've missed the point. The point is, watching this first season of Harlemhas been a pleasure, to say the absolute least, and I can't wait to find myself back in Black Mecca with these ladies for season two.