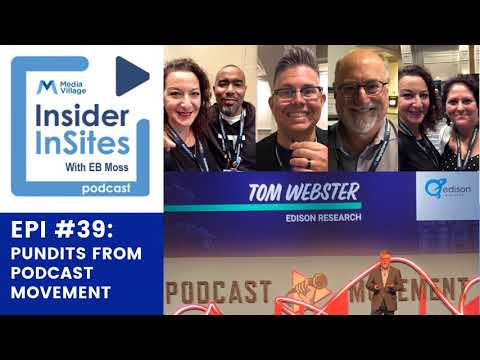 Close to 3,000 people actually chose to go to Orlando in August to partake in podcasting discussions — some of which were hotter than the weather — at Podcast Movement 2019. Attendees could choose a free lapel pin to wear (e.g., "2 Years," "3 Years") to tout their attendance anniversary. Biggest bragging rights went to those sporting a "6 Years" pin, evidence of their foresight as those first to attend what's become the largest gathering for podcasting in the country. Even as a third-year pod person (which still earned me considerable props), the exponential growth I've seen in those years up to this month's event was impressive.

I found five pundits from the crowd who are, arguably, experts in their respective specialties, to talk about podcasts' evolution and their projections for the business. With such rapid industry growth, I asked each if "the more things change, are they changing" or are we still challenged by everything from measurement to diversity?

Hear from Donald Albright, cofounder of Tenderfoot TV, which is home to six true-crime podcast phenoms including Up and Vanished, with its 300 million downloads and counting. Edison Research's own phenomenal presenter, Tom Webster, and I discuss "downloads" versus "listens" and measuring those who consume their podcasts via YouTube. (Both Edison and Nielsen's Podcast Listener Buying survey show YouTube becoming a top destination for podcast discovery.)

How do brands get in on this medium effectively? A little company called eBay has had success with branded podcasts, as explained by community content manager Doug Smith. For the history and futurecast, amplifi Media's Steve Goldstein weighs in. Finally, Jessica Kupferman of She Podcasts provides a force for the female voice.

You'll want to listen to this episode in its 35-minute entirety, especially if you don't have your first-year pin. By next year's Podcast Movement, you might be one of... 4,000 attendees?

There were so many good takeaways from the interviews that this is Part 1 of a two-part topline transcript, edited for clarity. Please subscribe to Insider InSites and rate, download, and share via Stitcher, Spotify, iHeartRadio, GooglePodcasts, Apple, TuneIn … and YouTube.

Out of the Basement: Donald Albright

Donald Albright cofounded Tenderfoot TV with Payne Lindsey, intending to leverage their foray into podcasting to do more television. When Up and Vanished became an instant hit, they partnered with HowStuffWorks (recently acquired by iHeartMedia) for Atlanta Monster. Now, there are more hits in the can, including this year's breakout, To Live and Die in L.A., in partnership with New York Times bestselling author Neil Strauss. While their first podcast did get adopted for television, with more to follow, Albright confesses that, given the creativity and freedom that podcasting offers, "we're here to stay."

Nonetheless, he's adamant that there's room for industry improvement, especially in the marketing and advertising of podcasts themselves; as in, "doing billboards, radio, and TV advertisements. We have a national TV campaign going right now on TNT for To Live and Die in L.A. We want people to say, 'Wow, I want to go watch that TV show.' And then they say, 'Oh wait, it's a podcast!'

"Let's value podcasts the same way you do TV and film.... That, in turn, will "grow the advertising revenue to take this entire industry to the next level," Albright says. "So, we have to not be so guarded and instead say, 'Look, this podcast should be in the penthouse. Just because you started it in your basement, you don't have to stay there to be authentic.'"

His caution: The industry's going to grow with or without laggards, "so let's all figure out how we make Podcast Movement 10 times bigger ... and a bigger part of CES, NAB, and all of these other conferences where podcasting should really be at the forefront, versus the stepbrother of radio."

Edison Research senior vice president Tom Webster has a reputation for making numbers come alive. He didn't disappoint with his 2019 Podcast Movement presentation, down to 10-foot projections of feral hogs. He explains: "Things are changing....  [For example,] a podcast, technically, is on-demand and downloadable and things like that, but now you have entities like Spotify and Pandora streaming podcasts [versus making them] downloadable. And now we have entities like iHeart that are going to actually broadcast podcasts on their radio stations, which are definitely not podcasts at that point.

"So, what's happening is it's socializing the term and the concept to a greater extent. It's going to attract more people, but it's also, I think, going to create some real confusion about what is and isn't a podcast. And that's going to give us some interesting measurement dilemmas: If a show has 10 million downloads, but also 10 million views on YouTube, is that 20 million people?"

Podcasts being found across different platforms led to his claim that today's audience is "like feral hogs: You can't pen them anymore.... In the early days of podcasting, it was easy to just corral them into iTunes. But, increasingly, as people new to the space are coming in..., they might listen to a podcast on Facebook. They might watch a YouTube video of a podcast.... So, I think the only way to win is to have your content everywhere, but have it native to that platform and just say, 'I know you're watching this on YouTube, so click the subscribe link below the video,' or 'I know you're seeing this on Facebook. Follow our page.' And not have to say things like, 'Subscribe to us on Stitcher, Spotify, iHeartRadio, GooglePodcasts, & Apple, wherever,' for each podcast." (Sorry, Tom. I'll get there.)

He notes that one-third of Americans are now at least monthly listeners of podcasts and expects that number to continue to rise. "The industry's maturing..., bringing in more mainstream media content consumers.... In our Infinite Dial study, year-over-year, this was the largest percentage-point increase in podcast listening across the board that we have seen in the 14 years we have tracked it....Those significant jumps were helped by alternate platforms. There were a lot of younger people introduced to podcasts because Spotify really started to feature them. And Pandora now is increasing their footprint in podcasting, as well. Those are big, broad, mainstream platforms, so it's just going to continue to expose people to the media."

Community content manager Doug Smith is sold on the value of the eBay for Business branded podcast as a seller-engagement tool. "It's part of the eBay community and it's where we reach out to sellers, tell seller stories, and gather internal eBay experts who talk about their areas of expertise," he says. "But it's also a very pertinent medium for the sellers. ...They get the internal perspective from eBay and hear from other sellers."

Smith also uses it as "a feedback loop to kind of show sellers that they're being listened to. ...Here's what's being talked about in the community, and we engage, we answer questions, we pass feedback onto the teams. ...Community is such a part of what eBay is…. We just had our big, yearly eBay Open convention, and we gathered hours and hours of content — because every seller has a story. Every item they sell has a story."

Smith sees podcasting's evolution enabling eBay's own evolution as a platform and uses it to offer a guide or tool for an e-commerce industry that's changed as well. He said, "...It's important for sellers to evolve, as well ... to think of themselves as a business ... and think of a modern buyer on mobile [who's] going to look at that first picture they see as one of the most important [parts] of a listing because they'll have other choices they can scroll down to. The market has changed, too. Stuff that used to sell might not sell as much now. So, sellers always have to be evolving and learning with the market and with e-commerce trends....

Smith also sees podcasting tying into their business as "a holistic story: We've got the eBay for Business brand, we have the podcast that's part of it, we have a weekly Facebook livecast that we do that's part of the brand. We have other content we put out that ties into the community.  ...And we have a studio on-site and do everything ourselves ... with a small but mighty team."

His parting words to this would-be seller? "Take a look at your listing. Maybe it needs to be refreshed. Look at your title, at your description, even look at your photos. Look at similar stuff and see what's selling. ...Maybe you have to adjust your pricing, maybe you have to try some new photos. But the big thing is is to keep that listing up because you've got that inherent, singular URL that's really good for the search engines."

To me, it sounds like advice applicable to selling an audience on podcasting, too.

Check out Part 2, featuring a discussion on podcasting history and futurecast with amplifi Media's Steve Goldstein and a conversation on women in podcasting with Jessica Kupferman of She Podcasts.