QSR Advertising Starts Strong as Competition Heats Up in 2017 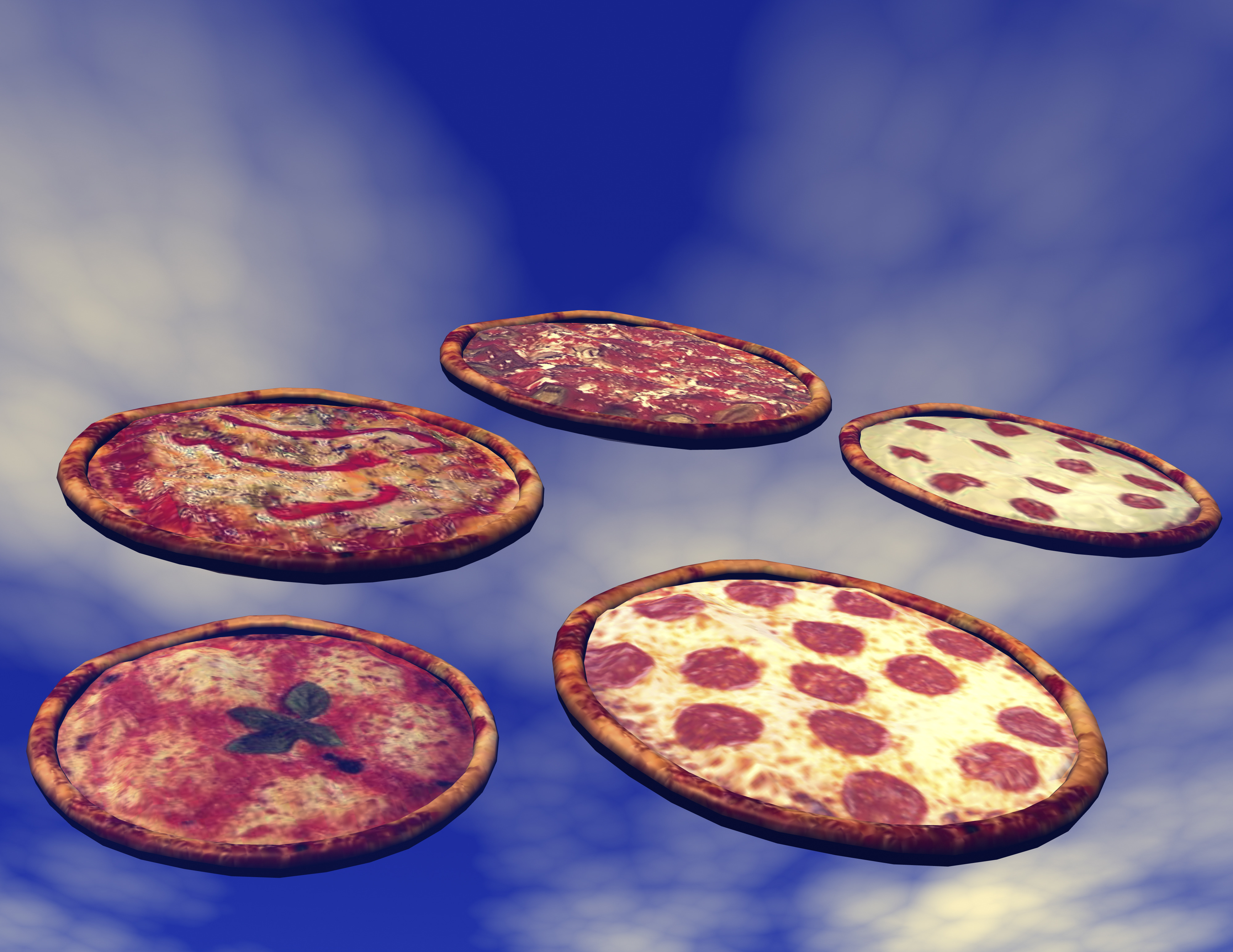 2017 is shaping up to be highly competitive as QSR (quick service restaurant) companies become laser focused on the consumer path to purchase.  As each QSR looks to differentiate and communicate menu, venue and delivery options to a diverse array of consumer targets, SMI reveals that media may be the big winner as advertising spend was up +16% for the first two months of the year, compared to the same period in 2016.

Sensing this increased competition, and in a move to fortify and diversify its customer base, McDonald's kicked off the year with bold marketing activity focused on the Big Mac, $1.00 coffee and a limited edition Big Mac special sauce give-away. By bolstering its core franchise of Big Mac loyalists and attracting new customers through the $1.00 coffee promotion, it appears that McDonald's may be resetting milestones for competitors as the industry transforms. The company also recently announced it will switch to fresh beef in its quarter pounders in an attempt to lure customers who are looking for more pure offerings. It The announcement comes with a large ad campaign, which we'll be watching in the coming months.

The big uptick in QSR ad spend in January and February 2017 highlights the reality that 2017 is a big one for the industry and presents a challenge for some media types to demonstrate relevancy and share of the media mix.  In January specifically, out-of-home topped the charts with +137.9% growth among QSR advertisers, demonstrating that its technological transformation has influenced decisions made "on the go."  February had a much more modest +4% increase, but compared to the industry's overall -10.6% decline on OOH spend in February, it's clear how important the medium is to the QSR industry. Newspaper spend was also up dramatically.

This increase supports that location and contextual relevance matter: Think newspapers and coffee in the morning!  National television followed with a healthy +24.3% increase in spend followed by digital at +15.6%.

While it's interesting to see how QSR is taking advantage of the full media mix to reach their audience with these increases in OOH and newspaper, we also wanted to take a deep dive into the role of television in the mix for the QSR industry, as it still accounts for the biggest spend by volume. We specifically dove into Domino's and Subway as samples of the industry at large.

We selected Subway to see how its rebrand, which kicked off during the Summer Olympics on NBC, was being supported and if the company was staying on mission to transition media from TV to digital.  It's also an outlier within the QSR industry, so we wanted to compare it to the rest.

Domino's, on the other hand, is a good example of what much of the industry is doing -- it's following the path of most QSR companies, while representing the highly competitive pizza category.  Domino's commitment to technology, including emojis on Twitter and a partnership with Google Home announced late last year, has helped to set this pizza chain apart from the competition.

While we reported earlier that national TV spend was up for the industry, our findings also reveal that cable TV was +32.5% for the QSR industry at large. While Domino's was up in both cable and broadcast, more than half of its TV budget went to cable with +57.6% of total national TV spend in the first two months of the year. While Domino's spent the majority of its money on entertainment shows (57.1%), it increased its spend on sports programming by +39.4%. Much of that additional spend went to the NFL on CBS and Fox.  Subway was down year-over-year in both media types, which suggests that it's transition to digital is well underway. 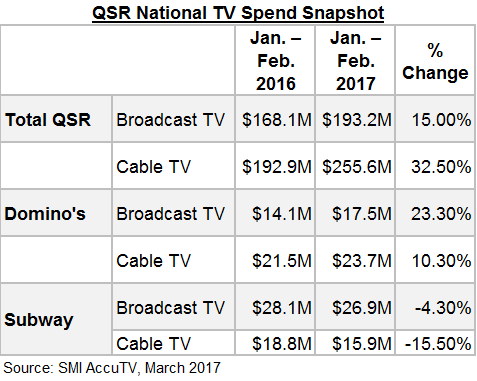 Next, we looked at spend by program genre and saw that spend was up across the QSR sector in sports, entertainment and news programming. Domino's mirrored the industry with an increased presence in all categories, year-over-year, while Subway only increased spend on news programming. 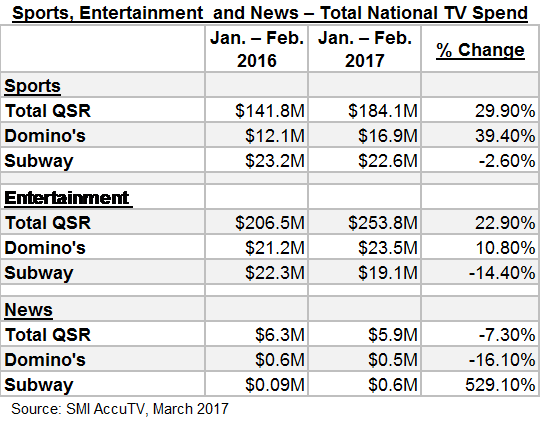 With many marketers recognizing the need for more diverse advertising, we looked to see whether QSR spend on television was targeting ethnic, cultural and/or multi-cultural audiences.  We looked specifically at Univision, BET, Telemundo, Galavision, ESPN Deportes, Estrella TV and UniMas. We found that spend was up +13.7% year-over-year for the QSR category across those identified networks and that Domino's delivered a +26.9% increase year-over-year across the same set.  Subway also saw a sizable increase of +30.1%, with most of that increase coming in February, around entertainment programming on Univision and Telemundo.

While television continues to play an important role in QSR advertising year-to-date, it will be interesting to see whether this commitment continues throughout the year.  If Subway continues to stay on mission to shift focus and dollars to mobile and loyalty programs we would expect to see a continued deceleration in its television spend.  On the other hand, Domino's commitment to cutting edge technological advancements and speed of delivery is a message best delivered by television to the masses.